What business best represents 1950's & 60's popular culture? Sure, you could say the soda fountain. But soda fountains had been around a lot longer than that. So you might choose the motel biz because Eisenhower's national highway system kicked in during the fifties. The drive-in, also tied to the American love of the car, had their heyday in the fifties and sixties, too. But you don't have to choose when you're in Fairlee, Vermont. In this town they have a combination motel/drive-in.

So if you ever had a hard time getting comfortable in your car or pick-up truck at the movie theater, if you ever had trouble adjusting the temperature, these are not problems at this theater, where you can watch the drive-in movie from your motel bed, looking through the bedroom window.

When I was kid, my brother and I could see the Star-View drive-in using a telescope. We couldn't actually see what was onscreen, but we could see there was something on the screen. This looked way cooler.

So we considered going to the movies at this theater.  But the outside of the rooms themselves scared us a bit.

The Fairlee Drive-in works on a cash only basis. Using a credit or debit card would, I suppose, interrupt the nostalgic experience. I only had a $20 bill in my wallet. They charged $9 per adult, and if you have food in your car there is an additional $5 charge. Since we are living in our van, there's always food there. And they were showing a double feature of Ice Age: Collision Course and Suicide Squad. That kind of scared us a bit as well.

But we're glad it exists. 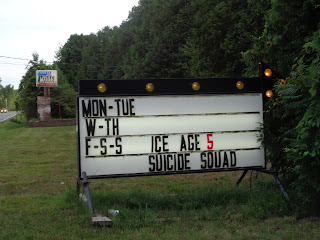 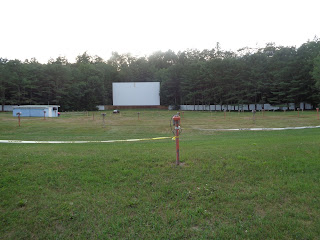 Posted by churchandstates at 12:22 PM

Email ThisBlogThis!Share to TwitterShare to FacebookShare to Pinterest
Labels: drive in, vermont