Massachusetts film on the big screen 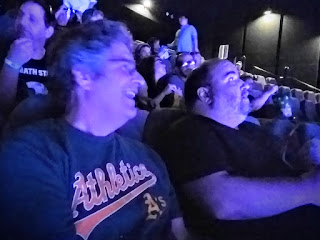 An ongoing theme in our bar and church blogs is community -- a major reason people say they go to either place. It would be easy to think of going to the movies as something quite different. One might think of movie going as a solitary experience. It's dark. Ideally people in the audience aren't talking. Yet movie going is, of course, about community as well.

There are online communities where people gather to talk about movies. I've been part of one of those communities for years, Hollywood Elsewhere. When I wrote about this trip to every state on that site, some folks suggested getting together. That finally happened in Massachusetts where we met with Paul, one of those online friends. We met at Jordan's Furniture in Reading, the location of an IMAX 3D theater. It is not a place that values subtlety. Fenway's Green Monster was in residence. The location includes a ropes course, "Beantown" made from jelly beans, an ice cream parlor, and a water fountain show. And there is a Fuddruckers where we met Paul. 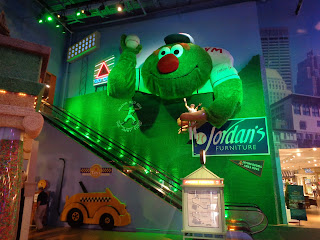 I asked Paul to tell me about his favorite movie going experiences. He spoke of watching movies with his parents and his daughter. He told about seeing Pulp Fiction with friends and getting together a group of friends for Star Wars debuts. Almost every remembrance was about the people he saw movies with more than the movies.

As for the movie we saw: the theater was state of the art. It had a huge screen with comfortable seats and a fine sound system. I was glad we didn't have many commercials to sit through, only a number of spiels for Jordan's Furniture. There was only one preview of coming attraction, for the next show at this IMAX, Suicide Squad.

Star Trek Beyond, which was fine. It was cool to see it in such a nice place. I liked it better than the second J. J. Abrams Trek film but not as well as the first. I watched every episode of the original series many, many times, so it's nice to see a new episodes. (Comparing the film to episodes of the Shatner/Nimoy series, it's better than "The Alternative Factor" but not as good as "A Piece of the Action.") 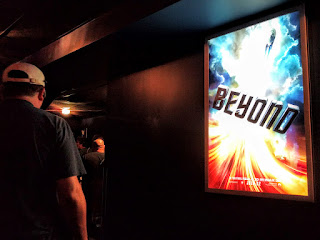 I doubt that I'll watch the film again anytime soon -- it's okay but rather forgettable. We will remember meeting and having a great time talking with Paul. So now this blog ends up being about community just like the our other two.
Posted by churchandstates at 7:33 AM