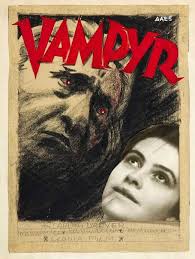 It’s rather interesting to look through history and see how many vampire films were made by world-class directors. A lot of classy directors keep their distance from the horror genre.
Kurosawa didn’t make any Godzilla films. Scorsese hasn’t made a wolfman film. Orson Welles never made a mummy film. In spite of this, many of cinema’s great directors have made vampire films.
The first (and only) film to win the 19227/28 Oscar for Best Picture: Unique and Artistic Production was Sunrise directed by F. W. Murnau -- who also directed 1922’s Nosferatu, which many still consider the greatest vampire film ever made. The Godfather and The Godfather II are often mentioned in conversations of the best films of all time, but years later Francis Ford Coppola directed Bram Stoker’s Dracula (which, ironically, I found to be quite far from the Stoker novel). Before Kathryn Bigelow got her Oscar for The Hurt Locker, she made 1987’s Near Dark; before Guillermo del Toro got his Oscar for The Shape of Water (which, to be fair, is a Creature of the Black Lagoon film), he made the vampire film Chronos. Other acclaimed directors who have made vampire films include Roman Polanski (The Fearless Vampire Killers), Chan-wook Park (Thirst), and Taika Waititi (What We Do in the Shadows).

In other words, it isn’t surprising that this month’s Movie Churches director, the Danish director Carl Theodor Dreyer, made a vampire film, Vampyr, which is now regarded as one of the greatest of vampire films. (As for me, I don’t think it holds up nearly as well as Nosferatu, but it is interesting.)

Dreyer began work on Vampyr soon after completing his masterpiece, The Passion of Joan of Arc. Dreyer went to England to learn how to make sound films. While there, he observed films dealing with the supernatural and said, “We can jolly well make this stuff too.” So he made a sound vampire film, but the use of sound is quite minimal. There isn’t much dialogue and title cards are used as in silent movie days.

Vampyr tells the story of Allan Grey (played by Julian West), inexplicably called “David” on the title cards of the version of the film I watched), a man who visits the small town of Courtempierre where strange things are occurring. He stays at the manor of Der Schlossherr (Marice Schultz), who gives Grey a mysterious package and tells him not to open it until his death. Der Schlossherr has two daughters, Léone and Giséle. Léone has been suffering of a mysterious illness.
Not long after that that Schlossherr is murdered. Grey opens the package to find it is a book on Vampirism.

Grey and the servant of the manor suspect that the cause of Léone’s illness is vampirism. They investigate the strange goings-on in the village, and Grey goes to an old castle where shadows act independently. A soldier with a peg leg finds he has to rearrange how he sits, so he will match his shadow. On the wall, a party of shadows carries on with a band and dancing, though no party-goers are actually present.

Léone leaves her bed and tries to make her way to the castle but is brought back by Grey and Léone’s nurse. The old town doctor who cares for Léone, though, is not what he appears to be. He is in league with a vampire and the peg-legged soldier.

The doctor brings poison to kill Léone so she will be condemned to everlasting damnation. It is interesting theology -- those who are bitten by vampires and who die under a vampire’s spell will be damned -- but I’m afraid I see no biblical or theological basis for this.

You’ll note there has been no mention of a church or clergy. The film is also surprisingly lacking in crosses. In Tod Browning’s Dracula, which came out the year before this film, crosses played an important role. Most vampire films made after Dracula feature crosses, but not this one.

If you look at almost any summary of the plot of Vampyr, including the one found in Wikipedia, there is no mention of a nun. But Léone’s nurse (Jane Mora) sure looks like a nun. She has what looks like a nun’s habit, but a little research shows that since nursing became a secular profession, they often kept the accouterments of nuns. They were even called nursing sisters. So was Léone’s nurse a nun or just a nurse that wore a nun’s garb? Whichever. This nurse sits day after day by her patient’s bed, obviously pained by her patient’s pain and rejoicing in her patient’s recovery. 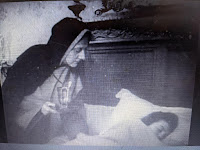 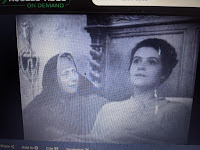 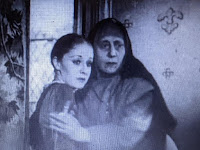 Throughout the history of Christendom, the church provided a steady stream of dedicated nurses to care for people, so it’s possible the nurse in this film was a nun. It’s just as possible she was a nurse, but not a nun -- a secular professional in the traditional dress of nuns, in honor of that Christian heritage. Either way, it’s a good legacy for the church found in this film. So, just in case it is a nun in this film, she gets our best rating of Four Steeples. If she wasn’t a nun, we at Movie Churches are sorry for wasting your valuable time.


Posted by churchandstates at 6:14 PM