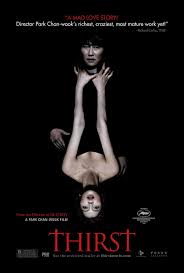 Thirst (2009)
Are we responsible for our actions when they’re caused by disease? Many people suffering from Alzheimer’s are angry. They can be violent, and they may say hurtful things. Are they morally culpable for their actions? Many would say no. The argument is sometimes made that drug and alcohol addictions are also diseases, and those afflicted are not responsible for their actions. Could the same argument be made for those suffering from the disease of vampirism?

The South Korean film Thirst has a more distinguished reputation than most of the vampire films in this blog. Based on Emile Zola’s novel Therese Raquin, it won the Jury Prize at the 2009 Cannes Film Festival. It was written and directed by Park Chan-wook, one of Asia’s most acclaimed contemporary filmmakers. Park is also the maker of Oldboy, considered by many to be one of the most disturbing mainstream features ever made -- and Thirst has some disturbing elements as well.

Thirst tells the story of a Catholic priest who ministers in a hospital. (The Catholic Church is a strong presence in South Korea, making up 10% of the nation’s population.) In the opening of the film, we see Father Sang-hyeon (Kang-ho Song) caring for an old man who reminisces about a time he shared his sponge cake with a poor family. They talk about memories and God’s faithfulness (“Remembering is His specialty,”  the priest says.) When the man goes into cardiac arrest, the priest helps give CPR. The patient goes into a coma. 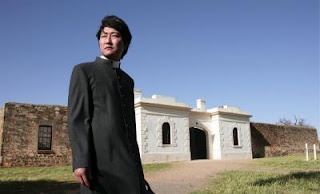 We also see the priest hearing a woman’s confession. She tells the priest she has been considering suicide, and the priest says, “Suicide is worse than first degree murder. It will send one to hell.” (The priest’s views on suicide changes as the film goes on.)

Father Sang wants to do more, and when he hears about medical experiments he volunteers to be a guinea pig to fight the deadly Emmanuel Virus. (The film never explicitly notes that “Emmanuel” means “God with us.”) He is concerned about the disease because it first broke out in Africa where many missionaries were affected by the disease.

When he leaves to be injected with the disease (and treated for it), he tells the hospital and friends he’s taking a retreat to a luxury hotel, and initially, the treatment doesn’t go well. His health deteriorates, his skin breaks out in boils, he requires blood transfusions, and eventually he is declared dead. But he miraculously revives.

News spreads throughout the nation about the priest’s miraculous recovery, and people flock to his church. They come to see the “Bandaged Priest” (he’s covered with torn sheets as bandages for the sores on his skin) and ask him to pray for their loved ones. He prays for a woman’s son who has cancer, and the cancer immediately goes into remission.

But all is not well. It turns out that one of his blood transfusions was from a vampire. That explains his recovery, but he also begins to suffer the afflictions of a vampire. He can’t go in the sunlight. And he requires blood. He steals blood from the hospital blood bank, and then takes blood from his comatose friend in the hospital (“He wouldn’t mind, he always shared with those in need.”)

The appetite for blood isn’t the only appetite that grows. Father Sang’s sexual appetites grow. He stays in the house of a friend and finds himself lusting for his friend’s wife. Though he tries to beat himself to overcome his desire, eventually he gives into the temptation and has an affair with her. When she leads him to believe her husband has beaten her, they plot to kill the husband. 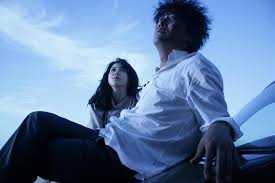 Murder and adultery are, to put it mildly, bad form for a priest (or for anyone). But is he to blame for his actions, or are they just symptoms of his disease of vampirism?

Things get worse when the priest’s mistress is turned to a vampire; she has much less moral restraint than the priest in the choice of victims.

Ultimately, the priest comes to see suicide and murder as the only possible solution to the threat that he and his mistress pose to all around them.

Another clergyman is featured prominently in the film. Sang’s bishop is blind and sick. He asks Sang to infect him with vampirism in hope he will regain his sight before he dies. Sang kills him instead.

When it comes to rating the clergy in this movie, should I give any leniency for the ravages of the vampire disease? I think I will, especially because Sang does seem kind and selfless at the film’s start. I’m giving Sang (and his bishop) a Two Steeple rating.

(The film merits its R rating with gruesome violence, sex scenes, and nudity.)


Posted by churchandstates at 7:10 AM