In Theaters Now: Same Kind of Different as Me 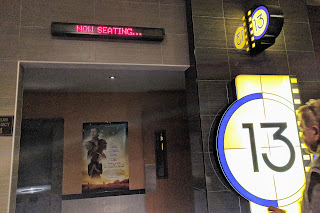 That moment made me sad -- this blog is about churches and clergy, so I inwardly cheer whenever anyone in a film goes in a church (“Yay! I have something to write about!”)

Still, there were plenty of other churches in the film, especially if we’re a little loose with the definition. Much of the film takes place in and around Union Gospel Mission in Fort Worth, Texas, which is not a church, though it does have a chapel.

We went to a screening of the film hosted by Fresno Rescue Mission (also not a church). The United States is full of rescue missions that feed the poor, shelter the homeless, help people find freedom from their addictions, and do the work Christ calls His Church to do. Most rescue missions in this country are supported by churches, relying on them for financial and volunteer support. So even though the rescue mission in the film isn’t a church, rescue missions do represent the work of Christ in the world as the Church does

Though Ron avoided entering the church during revival season, he does, at his wife’s urging, go in the rescue mission. His wife, Deborah (Renee Zellweger), tells Ron she has a dream about this rescue mission and a man she was going to meet there. The couple volunteer to serve a meal, and during that meal, a man with a baseball bat comes in shouting that he’s looking for the person who stole his shoes. He slams the bat on the table and breaks a window. Deborah reprimands him; he settles down a bit and leaves. Then Deborah tells Ron that the man from her dream, the man with the baseball bat that others in the mission call “Suicide,” is the man God has called them to befriend.

Deborah and Ron continue volunteering at the mission, using their significant financial resources (Ron is a very successful art dealer) to improve the mission. The mission facility is greatly improved and builds its ministry to the community.

And they continue to build a friendship with Denver (Djimon Hounsou), the man known as “Suicide.” Denver Moore, an old man, a homeless man, a black man who grew up in the segregated South, tells Ron, a rich, white, educated man, the story of his life. Denver tells about his encounter with members of the Ku Klux Klan, but he also tells about going to his uncle’s church in Louisiana. We see a flashback of his baptism in a swamp, when the pastor miscalculated his dunk and Denver sank to the bottom. But, Denver tells Ron, he came up “full of the Holy Ghost”.

There’s also a church during a funeral scene. It seems to a Catholic sanctuary, what with the stations of the Cross stained glass windows. Instead of a priest, though, we hear Denver deliver the eulogy, in which we hear the title line as Denver describes other people as the “same kind of different as me.”

So we don’t see much of “official” churches in the film, but we do see good work done through the mission, which is made possible by work of the church. Because of the Union Gospel Mission, the film gets Four Steeples.

Note:
One of the nice things about writing Movie Churches is being able to avoid writing about the more thorny issues in a film. I’m just here to talk about how church and clergy are presented in a film as a way of discussing how religious things have been viewed in Hollywood through the decades. If there are other issues of controversy, I don’t have to deal with it.

If, instead, I was writing a review of this film, I’d have to deal with the issue of “the magic Negro.”

The term was popularized by Spike Lee in 2001 in reference to films like The Green Mile and The Legend of Bagger Vance, films where a black character’s sole function is to help the white person, the central character, with their problems. Some would undoubtedly see that problem in this film.


But Ron and Denver, the real people, really were friends, and Denver really did change Ron’s life (and was, with Ron, the co-author of the book the film is based on). I appreciate the film’s suggestion that we might meet someone at a rescue mission who will change our lives for the better. That’s a true story as well.
Posted by churchandstates at 2:38 PM