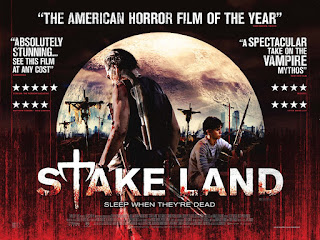 Stake Land (2010)
In 1967, Joseph Bayly wrote a story called “The Gospel Blimp” about folks from a church who decide to evangelize the neighborhood by dropping Gospel tracts from the sky. The tracts litter yards and clog storm dreams. It’s a very unproductive plan for reaching the community for Christ.

Perhaps you’ve seen the episode of WKRP in Cincinnati in which the radio station drops turkeys from the sky for a publicity stunt. That plan doesn’t go well either, but at least both plans were kindly intentioned. That’s not the case with the church that drops vampires from the sky in the film Stake Land.

Stake Land was produced in 2010 and released to five theaters in 2011. It didn’t have much of a life in the cinema, but it better with home video and, later, streaming on Netflix. The Syfy channel even made a sequel, Stake Land II: The Stakelander in 2016. 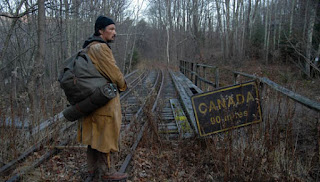 The first movie was made the same year that the TV series The Walking Dead came out, and both have a similar feel. In both a plague (in Stake Land of vampires and in The Walking Dead of zombies) has brought down American civilization. Both follow the nomadic journey of survivors looking searching for a place of peace and safety. In both, viewers should beware of investing emotionally in any one character, because even cute children are not safe. Stake Land, though, has less than two hours of carnage as opposed to The Walking Dead’s hundred plus. But neither offers much hope.

Stake Land opens with a Gospel song, “No More, Oh Lord.” A man only called “Mister” rescues a boy named Martin whose family was killed by vampires. With his dying words, Martin’s father tells Mister to save his son. The two try to head for a rumored place of safety in the north, New Eden (Canada). In a voiceover, Martin says, “We avoided the cities, but pockets of civilization survived. We waited for a Messiah, but He never came.”

The two ride in a car and come across a nun who runs into the road, pursued by two men who assault her. Mister kills the two men, and the nun (played by Kelly McGillis of Top Gun fame) joins them in their journey. The nun, Sister, says of the men who attacked her, “Those men, they said they were Christians.” Mister expects gratitude for killing the men, but she says, “It’s not ours to judge.”

That night, they meet one of her former friends, Sister Agatha. Sister Agatha has turned to a vampire, so Mister and Martin kill her.

Along the way, the travelers see signs announcing they are entering “God’s Country.” On the car radio, they hear a preacher inviting them to a revival tent in the woods. When Mister, Martin, and Sister enter the tent, it appears that the pews are littered with corpses. But they hear a baby crying and see a crib. As they approach the crib, they find a doll inside with a tape recorder playing a baby’s cries. The “corpses” rise -- they are members of a group that calls themselves a Christian Church, the Brotherhood.

One of the men who assaulted Sister, killed by Mister, was the son of the leader of the Brotherhood, Jebedia Loven. Loven explains that the Brotherhood believe in Aryan supremacy and believe that God has sent the vampires to purify the nation.  Loven protects vampires and feeds them.

Loven sends Mister, bound, into the night to be killed by vampires and enslaves Martin and Sister. But Mister, Martin, and Sister all escape in their own ways and find their way to a government-run settlement.

They think, at that settlement, they’ve found peace, but at a community social, a dance, the  Brotherhood airlift vampires to the party. Ten people are killed. Martin attributes the attack as coming from “Christians.” MIster gets revenge on the Brotherhood, but the Brotherhood strikes back. Jebedia ultimately comes back as a vampire seeking revenge and calling himself “God.”

To say the least, Jebedia as clergy and the church represented by the Aryan Brotherhood does not come across well in the film. It receives the lowest possible rating of One Steeple.

(Sister, on the other hand, quoting the 23rd Psalm and praying with her last breath, would receive Three.)
Posted by churchandstates at 10:18 PM