It's Legal Month at Movie Churches! The Case for Christ 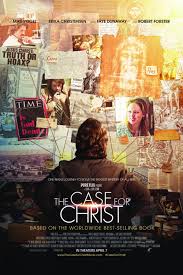 Some might argue with beginning Legal Movie Churches Month with a film about journalist, but I feel the blame for that is squarely on the shoulders of Lee Strobel, the real life protagonist of the film. The title, The Case for Christ, sure sounds like it takes place in the courthouse -- and a bit of the film actually does.

The film is based on a nonfiction book well described by its title, The Case for Christ: A Journalist’s Investigation of the Evidence for Jesus. The film itself is a biographic look at the time in Strobel’s life when he decided to investigate the case for the divinity of Christ and went from being an atheist to a believer.

The film begins with Strobel (Mike Vogel) joining the staff of the Chicago Tribune. His investigations into car safety (the Ford Pinto) won awards. He was able to publish a book on the subject. His marriage was happy, but his young daughter, Alison, chokes in a restaurant, a nurse is comes to her rescue. Though the Stobels comment that luck saved their daughter, the nurse, Alfie (L. Scott Caldwell), says, “It’s not luck - it’s Jesus.”

At bedtime that night, Alison asks about Jesus. Lee tells her that they’re atheists, and Alison says, “I guess I’m an atheist too.”

Lee’s wife, Leslie (Erika Christensen), seems troubled by this statement. As a couple they’d decided to let Alison choose her faith path, but she feels Lee is pressuring their daughter to follow his. She asks about their unbelief, “How can we be so sure?”

Alfie invites Leslie to her church, Willow Creek Community Church. She goes to a Wednesday night service (in those days, the church met in a movie theater). Leslie hears Pastor Bill Hybels (Jordan Cox) say, “God is patient. When you’re ready, He’ll be waiting for you.” And he quotes from the Gospel of John, “As many as received Him, to them he gave the right to be children of God.”

He listens as she says, “I went to church, and I felt something. I prayed. I talked to Jesus and asked Him in my life...I know it’s a good thing for me, for us.” 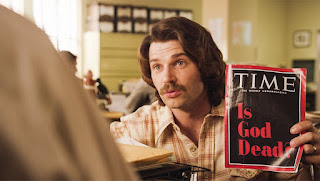 Lee is quite upset by his wife’s decision to follow Jesus. He goes to his mentor, another atheist, saying, “I think I can get through to her before she gets too deep. It comes down to facts and truth.” Lee believes truth can drive out superstition, and he believes in the old journalist’s motto, “If your mother says she loves you, check it out.” Lee decides to pursue the evidence about Jesus Christ in hopes of showing Leslie that Christianity is a fraud.

He goes to see an array of experts. He goes to talk to Father Jose Maria Marquez (Miguel Perez), one of the world’s leading experts in archaeology, who went from the life of an academic to the life of a priest. While there, Stobel scoff as the money that goes into building such elaborate buildings as the large Catholic church where Father Marquez serves.

But the priest gives convincing evidence for the reliability of the Gospels as historical documents. He points out that there is a gap of over a hundred years between extant copies of the Iliad and the original document, whereas with the Gospels it is a matter of decades.

Lee continues to conflict with Leslie, accusing her of “cheating on me with Jesus.” He abuses alcohol, even drinking and driving.

Leslie eventually convinces Lee to go to Willow Creek with her.  They sing the Keith Green song, “You Put This Love in My Heart”.  Hybels preaches, “Churches aren’t perfect, but God is.” The people at the church seem happy and are of mixed ethnicity, but Lee is not happy, and asks Alfie to stop interfering in their lives.

Lee goes to see a psychologist, Dr. Roberta Waters (Faye Dunaway), to talk about whether the Apostles and authors of the New Testament are reliable. She says they are, and asks Lee about his father issues. His relationship with his father (Robert Forster) is not healthy.

While all of this is going on, Lee is covering a major story from the legal affairs desk about a gang member accused of shooting a cop. Lee goes to court to cover the gang member’s sentencing. He condemns the defendant in his stories for the Tribune, but he eventually finds out that it was a dirty cop who framed the gang member. Strobel realizes he sometimes gets things wrong -- which helps him to understand he might have gotten things wrong about God.

He talks to Leslie about following Jesus, “What is the protocol? Should I go to church?”

They are alone at their home, but she says, “This is church.”  And he prays to ask Christ into his life.

An on screen epilogue informs the audience that Strobel eventually left the Tribune and became a pastor at Willow Creek Community Church in 1987. He is currently is a pastor at Woodlands Church and teaches at Woodlands Seminary, both in Woodlands, Texas.

This blog is about churches in movies, usually, but because the church in this film, Willow Creek Community Church, is real, I have to look at it differently. I’ve worshiped at Willow Creek a couple of times, and I’ve even gone to a conference there. The church is not without its problems, but as the church is presented in the film, I’m giving it our highest rating of Four Steeples. (As for the other prominent clergy in the film, Father Marquez; I’d give him Four Steeples as well.)


Posted by churchandstates at 7:17 AM