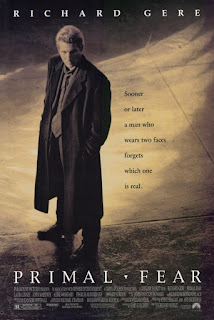 There's only one idealist in this film. He’s a defense attorney, because if anyone would see the world through rose colored glasses, it’d be a man who spends every work day being lied to by criminals, right? Everyone else -- the police, those in government, and especially those in the church -- are cynical, if not outright evil.

Richard Gere plays Martin Vail, a prominent Chicago attorney who previously worked for the Cook County District Attorney. The film begins as Vail is interviewed by a journalist for the cover story of a newspaper supplement. He tells the reporter that every client, even a guilty one, deserves the best possible defense. When the reporter suggests that the important thing is getting to the truth, Martin responds, “Truth? How do you mean? My version, the one I create, the illusion of truth.”

Later, we see Vail drop by the Chicago Bar Association and Catholic Charities Ball. Really, what better tie-in could we have for Movie Churches Legal Month than that? Archbishop Rushman (Stanley Anderson) is speaking at the event, telling a lame joke, “I haven’t seen so many lawyers and politicians gathered together since confession this morning.” 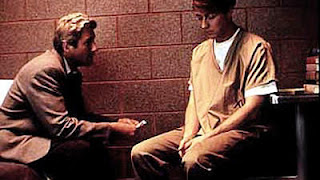 The next day, Vail sees a TV story about Archbishop Rushman’s grisly murder and an altar boy’s arrest for the crime. Vail goes to the jail to defend the “boy,” Aaron (played by Edward Norton, who also appeared in The People Vs. Larry Flynt, a film made the same year as this one.) Aaron had been homeless, but was taken in by the Archbishop and allowed to serve in the church beyond the usual altar boy age limitations.

Vail decides to defend Aaron, believing in his innocence when no one else does. In his investigation, he discovers political corruption in the District Attorney’s office. He also finds that financial corruption is linked to the local Catholic diocese.

But the greatest corruption is found when Vail uncovers a video tape in the crime scene, the Archbishop’s apartment. It is a pornographic tape the Archbishop made of Aaron and another young man and a young woman. The Archbishop would practice his sermon before the young people, and then have them perform sex for the camera.

This is, of course, considered Aaron’s motive for killing the Archbishop, but Vail doesn’t believe it. He alone seems to have any idealism, in spite of his cynical bluster, but that idealism will be shattered.

But this film’s view of the Catholic Church manages to be darker than the true stories found in the film Spotlight. Therefore, the church in Primal Fear, along with the Archbishop, receives our lowest rating of One Steeple.

(This was scheduled to be the final film of our November Legal Church Month, but it was a little too grim and discouraging to post on the day after Thanksgiving. Expect a much more festive film will take its place!)

Posted by churchandstates at 7:39 AM