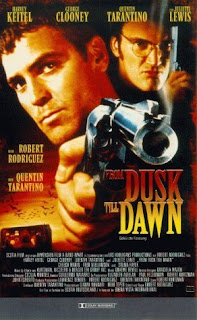 From Dusk Till Dawn (1996)
Sometimes, you expect that a salesperson isn’t telling the truth, and that’s alright. For some people, buying a used car is a game, and no one in the conversation really believes that a little old lady only drove the car to church on Sundays. Still, if the pastor of that church doesn’t believe what he’s selling, you might feel differently. A member of the clergy who thinks the church’s doctrine is hooey is worse -- their product should be “truth,” or at least the search for truth.

That’s why I appreciate Jacob Fuller’s (Harvey Keitel) decision to leave the ministry in the 1996 vampire film From Dusk Till Dawn. When we’re introduced to Jacob, he’s at a roadside diner, having breakfast with his two teenage children. With Kate (Juliette Lewis) and Scott (Ernest Liu), he’s traveling south towards Mexico in in an RV.

Kate tells her dad she’d called and checked messages on the home answering machine. “One of the messages on the machine was from Bethel Baptist, and they said they wouldn’t permanently replace you until you came back.” 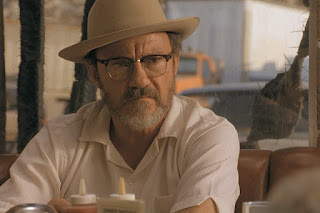 When Jacob says he’s not going back, Kate asks, “Don’t you believe in God anymore?”

The Fullers go to stay in a motel, because Jacob says he wants to sleep in a real bed one last time (the RV beds don’t qualify). While there, they encounter bank robbing homicidal brothers, Seth (George Clooney) and Richard (Quentin Tarantino) Gecko. The brothers kidnap the family and hijack their RV to cross the border.

Jacob drives while Seth literally rides shotgun (well, at least literally gun) and goes through Jacob’s wallet. He sees a picture of Jacob with his wife and asks, “Where’s the old lady?” 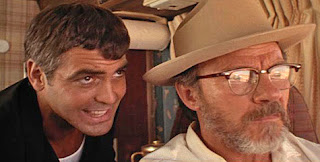 “How did it happen?”

“She was alive about six hours, trapped in the car.”

Seth sees something else in the wallet and asks, “Are you a priest?”

“I’ve got as up close and personal with you as I’d care to get,” Jacob responds.

Seth smirks and says he agrees.

As the audience, we can see fairly clearly that Jacob has left the ministry because of the pain and questioning that stem from his wife’s death, if only because we’ve seen a similar situation in Movie Churches during Science Fiction Month. In Signs, Mel Gibson played an Episcopal priest who left the ministry when his wife died in similar circumstances.

This film, though, takes quite a turn when the brothers take the family to a bar in Mexico where the brothers plan to meet someone offering protection (“If you want sanctuary, you got to pay the price, it’s Scripture. You pay 30%. So let it be written, so let it be done.”) When they walk into the bar, the bouncer threatens to toss them out arguing it’s a biker and trucker bar. Clooney is about to throw a punch when the ex-preacher says, “This bar is for truckers and bikers? See that recreational vehicle in the parking lot? You need a truck driver’s license to drive that. I’m a truck driver and these are my friends.” Jacob succeeds in making peace for the moment. 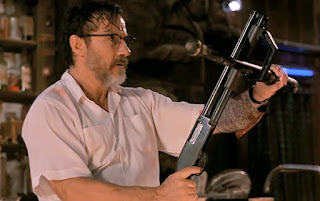 It’s a short moment, because we soon learn that this is not just a biker/trucker bar. It’s chiefly a vampire bar. The vampires begin to attack, and the two families fight back, escaping to a locked room where they await another attack. During the fight, they discover that crosses are effective weapons against the fiends when Scott takes Kate’s cross necklace and stuffs it in a vampire’s mouth, causing him to explode.

The group assesses their possessions, and Seth recognizes their most valuable resource. “Our best weapon is this man [Jacob], he’s a preacher. As far as God is concerned, we’re all pieces of [excrement] but he’s one of the boys. Only one problem: his faith is not what it was.”

But Seth challenges Jacob. “Those are Sons of Hell, so there are Sons of God. Are you a faithless creature, or you a [mean bleeping bleeping] Servant of God?”

Jacob sees truth in Seth’s argument. If there is evil, there is also good, and for the sake of his children, if nothing else, he must represent for the good. “I”m a servant of God,” he says, and prepares for the fight. He agrees to bless their bullets (which they mark with tiny crosses) and bless water, turning it into Holy Water, an effective weapon.

When Jacob is bitten by a vampire, he continues to fight. But he exacts a promise from Seth and his children, “Fight with me to the bitter end. But when I turn, I won’t be Jacob anymore, I’ll be a lap dog of Satan. Swear to God you will kill me.” That time does come, but Scott can’t kill his “father.” Seth does the deed.

As always, we aren’t reviewing films here, but rather churches and clergy in films. Jacob may be former clergy, and he may drink on occasion, and he uses the Lord’s name in vain. But he is also a man of integrity, willing to sacrifice his life for others, which earns him a Three Steeple ranking.

(From Dusk to Dawn warrants its R rating, with profanity, nudity, and much bloody violence.)
Posted by churchandstates at 2:54 AM