Church People (2021)
Mike Lindell, the man who founded the MyPillow company, is a lightning rod of controversy. In recent months, he was honored by then-President Trump. After the election, Lindell made statements about Democrats stealing the election. Lindell was, and probably will be forever linked with the January 6th rioters. This is all rather sad because Lindell founded MyPillow with some worthy goals, such as providing employment for ex-convicts and people looking to overcome addictions, but now Lindell is a villain to the political left and a hero to the political right. In an introduction to the new film, Church People, Lindell talks about the importance of bringing people in the church together, but it seems quite unlikely that at this time he's someone who could bring people together. 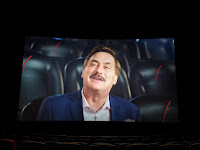 Also, considering the number of people that were in the theater the night we attended Saturday night, it's unlikely that Lindell will be widely known as a movie producer anytime soon, though he was executive producer for the new Christian comedy. (Lindell also plays a bit part in the film. Sharp eyes may spot the Mike Lindell bobblehead on the senior pastor's desk, but no one will be able to miss the MyPillow product placement.) Though we saw the film in a movie theater, it hasn’t been widely released but has had limited showings through Fathom events.

Church People wants to be a satire of the gimmicks and stunts found in seeker-friendly and mega-churches. Since I served many years in youth ministry, I'm pleased to report that the hero is a youth pastor. Thor Ramsey plays youth pastor Guy Sides (it’s difficult to decide whether the actor's name or the character’s name is more unlikely). Ramsey's in his 50’s, and his character is asked if he isn't too old for his job. Guy responds, “Youth pastor means I minister to youth, not that I’m young!” The fact is that most (though not all) successful youth pastors are in their 20’s or 30’s. The people who stay in youth ministry longer than that tend to do a good job of recruiting and training other staff and or volunteers. In this film Guy seems to be running the youth group practically solo, in spite of taking a lengthy book tour as “America’s Youth Pastor.” (this title seems peculiar -- he seems to have only a couple dozen members in his youth group in a megachurch of thousands. I don’t see why he would be so acclaimed.

Pastor Sides seems quite awkward with people, especially women. A woman who seems to recognize him comes into his office while he's talking with a student, and he tries to figure out why she's there -- is she the parent of a student? Does she want to be a volunteer? He scrambles to find a volunteer form in his desk as the woman is obviously amused that he doesn't recognize her.  (The film’s initial title was Youth Group. In spite of this, the youth are mostly anonymous and minimally involved in the story.)
Turns out she's Carla Finney (Erin Cahill), the daughter of the senior pastor. For the past ten years, she's been a missionary in Molvania (not a real country) and she's just returned home after a broken engagement.
I would assume the church would have supported Carla, so I was baffled Guy wouldn’t recognize her -- even after an unlikely absence of ten years. Before long, he and Carla are dating and having quite intimate conversations with her in front of the students in the youth group (which is -- obviously -- quite unprofessional) The students are surprisingly invested in the relationship between Guy and Carla (they are quite disappointed when they don’t kiss in front of them).

Carla’s father, Pastor Skip Finney (Michael Monks), is also overly involved with his daughter’s love life. He tries to set her up with Tino (Joey Fatone) who seems to have the singular profession of church soloist. He is a simple (dim) man, which is why Skip thinks he’ll be “safe” for his daughter. No one in the film seems to think it might be okay for Carla to be, um, maybe, single. Everyone seems very concerned that she should be in a relationship and not waste time going back to the mission field.

Pastor Skip has what he believes are big plans for his church. He tries to bolster attendance by using BMX riders on the stage behind him while he preaches. He challenges the congregation to raise attendance by saying if a bar is reached, he will have the church logo tattooed on his bicep at the end of a service. But his biggest stunt is planned for Good Friday. He decides to crucify someone on stage in the Good Friday worship service. Since none of the staff agree to be crucified (even though they -- probably -- won't be killed), he recruits a high school student, Blaise, a new believer. (Fortunately, the ‘G’ rating assures audiences they won’t really witness a crucifixion in the film.)

Pastor Guy is outraged that Skip is taking advantage of one of his students, and the majority of the film is Guy’s attempt to prevent Blaise (Clancy McCartney) from having nails hammered into his hands and feet.

The only really competent person who works at Sand Hills Neighborhood Church is head greeter Chad Chase (played by Stephen Baldwin. It’s a double Baldwin film with Billy Baldwin playing Blaise’s father.) Chase knows the names of most of the members of the congregation and is aware of their needs. He genuinely seems to care about other people, which seems out of the wheelhouse of the pastoral staff, which is focused on numbers and influence. (Guy does give lip service to concern for the Gospel and his students, but he doesn’t really seem to be very good at his job.)

This is why we are giving Sand Hills Neighborhood Church and its staff a mere two steeples for its Movie Churches rating. 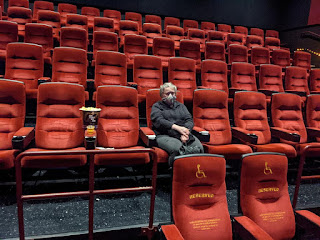 We weren't crowded in the theater.
Mindy channels her inner inaugural Bernie.
Posted by churchandstates at 7:03 PM