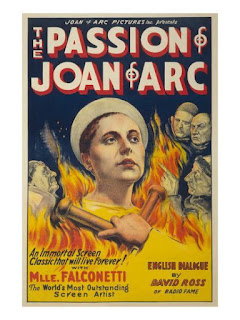 Joan, of course, lived a brief but fascinating life, and the film’s life has been rather fascinating as well. French nationalists were quite skeptical about a Danish director telling the story of their national heroine. Dreyer spent a year studying the transcripts of the trial of Joan and took all of the dialogue (I should say title cards) from those transcripts. The final version was deemed blasphemous by the Archbishop of Paris, and so the film was severely edited by French government censors. The original version of the film was considered lost. But in 1981, the final version of the film was found in a mental institution in Olso, Norway. 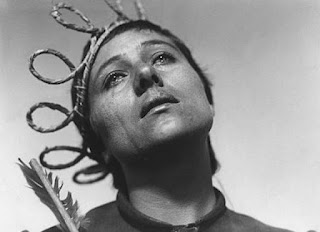 When I was planning out Joan of Arc Month at the end of 2019, I figured I'd borrow a DVD of the film from the library. I didn’t anticipate the difficulty of doing something so seemingly simple in the pandemic world to come. Then I discovered the whole film was on Youtube -- which was great because we found the title cards were translated in subtitles...into Portuguese. Since neither Mindy or I know either language, we weren't positive what the title cards said, but we enjoyed making guesses (“‘Hommes’ means ‘men,’ right? I think they’re asking why she’s wearing men’s clothing.”) And fortunately, though the title cards are limited, the story is fairly easy to follow (especially if you know a bit of Joan’s story.) 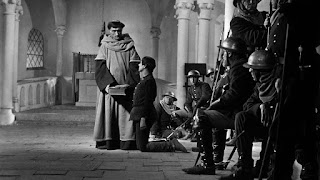 So what it Joan’s story? She was born in a peasant family in Domremy 1412 toward the end of the Hundred Years' War when her native France was still dominated by England. As she grew up, she claimed to have visions from Christian Saints who told her she would lead French armies against the English and bring victory for Charles VII of France. Amazingly, she did indeed lead French armies to victories. But in 1430 she was captured by French nobles allied with the English. She was handed over to the English and put on trial for heresy by French clergymen loyal to the English. The film is the story of that trial.

Maria Falcontti (a stage actress in one of her few film roles) played Joan with a performance that is still heralded as one of the greatest on the screen. Dreyer used mainly close-ups to capture the performances. He insisted his actors not wear make-up and filmed under harsh lights making Joan pathetic and her persecutors grotesque. 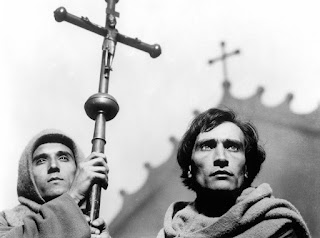 As the trial begins, Joan is forced to swear on the Bible, a locked Bible bound in chains. She is asked about her visions of St. Michael. As mentioned before, she is asked why she is wearing men's clothes and declares that she will wear them until her mission from God is complete.

One of the priests believes her to be a saint and he bows to her, along with some of the monks. Those men are thrown out of the proceedings.

Joan is subjected to physical torture but won’t recant her visions or her loyalty to France and her King. But the clergy comes upon a more insidious form of torture. They threaten to kill her without allowing her to take communion, jeopardizing her state of grace in death. This leads her to recant and sign a confession. She receives the Sacrament.

But she then recants her recant. She is tied to the stake with a sign naming her a heretic. She is burned alive. Joan cries out to Jesus in her death.

It is then that something a little too familiar takes place. The French people, outraged by the execution of an innocent by authorities riot. They throw rocks through the church windows. The clergy bring in soldiers, hand out maces, beat the protesting men and women. It all seems too much like this week's newsfeed.

But we aren’t here to evaluate the film, let alone history or current events. We are here to examine the clergy in films. And I’m afraid we rather frown upon clergy who proclaim young women satanic, let alone torturing them and executing them. So the church and clergy in this film earn a measly one Steeple. Of course, Joan would later be declared a Saint by the Roman Catholic Church -- which I would roughly equate with our highest Clergy rating of Four Steeples.
Posted by churchandstates at 6:29 PM