Joan of Arc Month: Where We Don't Write About Bill & Ted 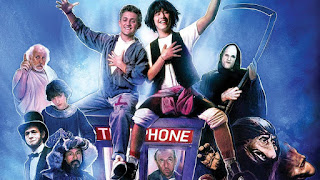 The Messenger: The Story of Joan of Arc (1999)
It really is too bad that during Joan of Arc Month I can’t discuss what is very likely the most popular film featuring the Maid of Orleans. But sadly, though that supreme cinematic masterpiece, Bill and Ted’s Excellent Adventure, has Joan, it doesn’t have any church or clergy. In that film, two good-hearted but rather dim high school students are loaned a time machine that they use for help with their history report. They abduct several historical figures: Napoleon, Socrates, Sigmund Freud, Ludwig von Beethoven, Genghis Khan, Abraham Lincoln, and Joan of Arc. I’m sure you’re thinking what I’m thinking… Why are women so greatly underrepresented while the French are so over-represented? Instead of talking to saints in the film, Joan leads an aerobics class. So we aren’t even going to bother discussing that film. 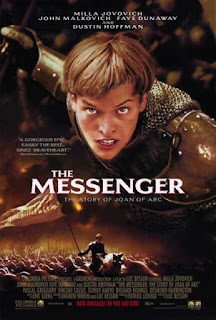 We're moving on to The Messenger: The Story of Joan of Arc directed by Luc Besson.

In this version, 23-year-old Milla Jovovich (a decade younger than Ingrid Bergman in last week's film), plays the teen warrior, but the story beats are much the same. Such set-pieces as Joan calling out an impersonator of Charles VII and discovering the true Dauphin (John Malkovich) are in both films, but this version also has much more elaborate battle sequences and, more importantly for this blog, more scenes in churches.

In the earlier film, Joan visits the ruins of a church with no priest in sight. In this film, we see Joan as a little girl talking to a priest in her hometown church. The priest says to her, “I’m always happy to see you, but you’ve been coming to church two, three times a day.”

“I need to confess,” Joan tells the priest, “I saw a poor monk without cheese. I gave him some.”

The priest is baffled why Joan considered this a sin, but she explains, “The cheese wasn’t mine, it was my father’s. He forgave me. I want Jesus to (forgive me).”

The exasperated priest exclaims, “If we bring every little thing to confession, we’ll spend our whole lives in church!” 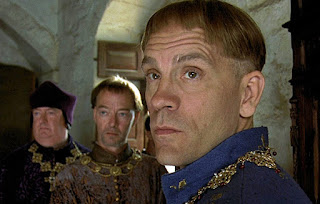 “And what’s wrong with that?” Joan asks.

“Are you happy at home?” the priest asks.

“What does he say?” is the next question from the priest.

“I must be good and help everyone and take care of myself,” she answers.

“Wherever he’s coming from,” the priest tells her, “you should listen to him because it sounds like he gives very good advice.”

Joan loves the church; she would be happy to spend her life there, but instead, that voice calls her to the battlefield.

Shortly after that is another scene that has no counterpart in the 1948 film. Joan is at home with her older sister when English soldiers break into their house. Joan hides in a closet which allows her to peer out and see the rape and murder of her sister (a truly disturbing scene). A priest performs the sister’s graveside service, and a greatly disturbed Joan finds her only comfort and hope in the church and its clergy.

She asks a priest why her sister died, instead of herself. An old priest tells her, “Only God can answer that. I realize your anguish, but you must learn to forgive. One thing I’m sure, God always has a reason. He has a reason to use you.”

It is soon after that Joan's Voices reveal the reason God has preserved her. “I was going to Mass, as I do every day, but everything was made clear, God gave me a message I was to deliver. He said I must save France from her enemies and deliver her into God’s hands.”

History dictates other appearances of the church in the film. Charles VII’s coronation takes place in a cathedral where he is charged with the defense of “your Holy Mother Church.” And of course, clergy preside over her trial for heresy.

There is one priest at the trial who tries to help her, taking her side when she asks to bring her case to the Pope. That priest is arrested by the English. As history tells us, the clergy convict her of heresy, and she's handed over to the civil authorities to be burned at the stake -- and that is not a good look. It keeps the church and clergy in this film from earning our highest steeple rating, but the good clergy early in the film earn a Three Steeples.
Posted by churchandstates at 7:44 PM