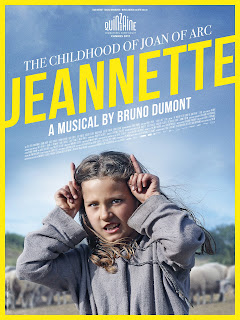 In a quick, not necessarily reliable, search of which historical characters have been depicted most often in films, I found Napoleon Bonaparte was the winner with 194 films, Jesus second with 152 followed by Abraham Lincoln with 137. Joan of Arc is almost certainly a contender in the category of woman most frequently featured in a film, with 44 films (11 of those being television features). So, even though this is the last week of Joan of Arc Month for June of 2020, it wouldn’t be difficult to do Joan Month Part Deux. For instance, we bypassed Cecil B. DeMille’s silent epic Joan the Woman (available on YouTube.) Roberto Rossellini made Joan of Arc at the Stake starring his wife Ingrid Bergman (almost a decade after Ingrid first played Joan -- and she was too old the first time.) Otto Preminger made Saint Joan based on the classic George Bernard Shaw play. We could even go with Irwin Allen’s The Story of Mankind in which Joan is played by Hedy Lamarr.

But if we should do another month of Joan of Arc, I very much doubt we will ever find a film quite as strange as Jeannette: The Childhood of Joan of Arc. It is almost certainly the oddest films we've ever viewed at Movie Churches.

The Amazon Prime description calls the film a “heavy metal musical about a young shepherdess, Jeannette, the future Joan of Arc.” This sounds odd by itself, but that doesn’t even mention the amateurish acting, Elaine Benes level choreography, and random absurdist elements. The script was based on a 1910 play by a Catholic writer, Charles Peguy, featuring young children having conversations about the problem of evil, questions of theodicy. So, sure, it’s… different.

Initially, I thought we finally might have a JoA film that cast an actress of appropriate age for the character, but the film does odd things with chronology. Often in films, the teen Joan is played by an actress in her twenties or thirties. But this film starts out with a title card saying that the film opens in 1425 and claims to present Jeannette as an 8-year-old, but the actress playing her seems a couple of years older than that. Now the real Joan/Jeannette was born in 1412, so in 1425 she was actually 13. This was all too much math for me.
Whatever age the young actress was or was meant to be, the acting, singing, and especially the dance challenges presented to her seemed far too daunting. (As for the dance, it seemed someone off stage was telling her, “Hop! Now spin! Now make windmill motions!”)

As a shepherdess, Jeannette seems to spend a great deal of time away from her sheep, wandering by the creek, singing tuneless songs. She encounters a couple of small boys and she gives them her bread (and then tells others of her noble deed, “I gave them all my bread, my mid-day meal and afternoon snack. I thought of all the starving people in the world.”) 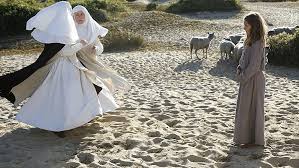 She talks with her friend Hauviette, another little girl, about how Jeannette is perceived by others in the village. Her friend says, “The parishioners believe you are happy because you care for the sick, but I know you are unhappy.” She says she understands Jeannette is unhappy because of injustice in the world. They talk about the oppression of the French by the English.
Jeannette ponders in song, “What can our charity do? When war is stronger than suffering.” Her friend suggests that a nun from the convent, Madame Gervaise, can help because she will know why God allows suffering in the world.

Unlike other presentations of Joan viewed this month, we never see Joan in a church. There are no priests in this film, but there is this one (maybe two) nun(s), it’s not really clear. Because when Madame Gervaise the nun comes, she comes in the form of two women, played by sisters (Aline and Elise Charles.)

Jeanette is asking of God in song, “What have you done with your Christian people? Could Jesus have died in vain?"

The nun(s) reply, “He is here, He is among us! Eternally, every day, His body, the same body that hung on the cross. The same sacrifice sheds the same blood. He perishes eternally for every parish.” (I don’t know what it was in the original French, but I appreciated that perish/parish pun in the English subtitle.)

But that's pretty much the only appearance of clergy in the film and this blog is here to present how clergy and churches are presented in film.

We see her meet with her “Voices,” Saint Marguerite and Saint Catherine (played by the Charles sisters who played the nun), and Saint Michael (played by a woman). They tell her she must save France.

The film ends where most stories of Joan begin, with slightly older Jeanne, now a teenager, going off with her uncle (a very young uncle in this version) to see the Dauphin about leading the French army. A good deal of time is spent discussing how to deceive her father so she will be able to leave.

The Jeannette/Joan of this film spends a great deal more time questioning God than Joans in other versions of the story, and more than I would think the real-life Joan questioned God. I blame the lack of church in this film, and that very odd nun(s) -- which is why I’m only giving the unseen church and seen nun(s) a rating of Two Steeples.
Posted by churchandstates at 5:51 AM