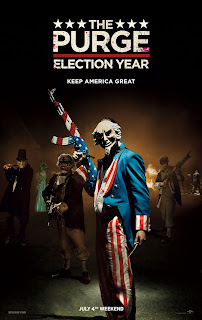 Aside from Jesse Jackson, I can’t think of any ordained minister who's made a credible run for President of the United States. There was Mike Huckabee, but he didn’t get very far in the process.

I got to thinking about why this might be. Traditionally, almost every President has identified as Christian -- some more convincingly than others -- but an ordained minister is generally ordained by a specific group and has to affirm specific beliefs that many people will disagree with. Also, I think a pastor who understands his or her work properly knows that proclaiming the Gospel is more important than anything a politician can do.

In 2016’s The Purge: Election Year, the leading candidate for President of the New United States is the Reverend Edwidge Owens (Kyle Secor), who wears his clerical collar and, in his ads, speaks with a cross in the background.


The Purge: Election Year is the third of the series of four Purge films, which imagine a future United States that has a day without consequences. One day a year, Purge Day, people can break any law without penalty including, perhaps especially, murder. This day allows people to work out their aggression, but even more importantly it brings down the cost of government social spending, welfare, Medicare, social security, etc.

In this film, a sizable portion of the American public has begun to question the wisdom of the day of lawlessness. One candidate for President wants to do away with the Purge, but it's not the minister. Senator Charlie Roan (Elizabeth Mitchell), who lost her family during a Purge, is campaigning on the platform of ending the annual night of chaos. The establishment candidate supporting the 25 years of rule by the NFFA (New Founding Fathers of America) Party is the Reverend Owens.

At an electoral debate, Senator Roan and the Rev. Owens discuss their plans for the upcoming Purge night.

Senator Owens asks, “And where will you be spending Purge Night, Minister?”

Rev. Owens replies, “I will once again be presiding over my party’s Midnight Purge Mass because I still believe in it.”

Senator Owens says, “The Midnight Purge Mass? Where our great NFFA leaders gather together and slaughter innocents. Is murder our new religion?”

Rev. Owens replies, "'Murder is our new religion.' That’s snappy. No, the Midnight Purge Mass where NFFA leaders gather to celebrate the night that saved this country from economic ruin. Now, America is built on sacrifice, from the revolution all the way up to WWII. And our Lord God sacrificed His own Son. That’s why we must sacrifice every year to rid ourselves of hatred. Now, the stats are undeniable, there has been far less crime…” 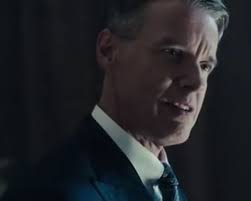 It is true that the Rev spends Purge night at a church, Our Lady of Sorrows. It is a rather Catholic sounding name for a church, but Owens does seem more Protestant-y, if you can use either term for a branch of “Christianity” that advocates murder for one night a year.

How do we at Movie Churches evaluate this church and minister? The advocacy of murder, along with theft and rape, on Purge Night is a really a black mark on their record, but I do have other problems with them.

For instance, the church is much too liturgical for my tastes. We see the Purge Mass and hear the liturgy of the service. In a dark sanctuary with candles lit, the congregation chants, “May the Purge cleanse us! Purge and purify! Blessed be America, a nation reborn.”

They chant these things, especially “Purge and purify,” again and again until the words lose any meaning. And I have a problem with that mixing national patriotism with religion. I mean, I have problems with a congregation singing “God Bless America” in a service, let alone this.

And I have real problems with Owens’ theology. He preaches, “Well, it’s been a long journey to get away from the lies and self-deception to this place of knowledge and awareness of who we really are. People of flesh, immensely flawed. It’s hard to see the ugly truth, but change can only come from acceptance. And change we must because it is our Godly duty to get rid of the fury and the hatred that poisons our souls and makes us sick. Makes us ugly. Tonight, we, the leaders of this great country, will sin, scour, sanitize, and sterilize our souls until we are free again, and this country will be better for it. We are not hypocrites. We practice what we preach. Purge and purify, say it with me. 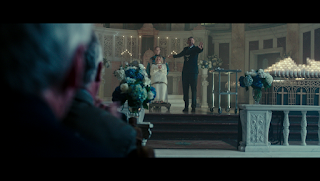 “Jesus died for our sins, and now our modern day martyrs will die for our trespasses. Our martyr’s name is Lawrence, a lifelong drug addict.” (A bound man is brought out to be killed.) “He wants to make amends. He wants to serve his God and his country and his government. Let’s thank Lawrence for his gift.”

I have all kinds of problems with this sermon. Yes, Scripture does acknowledge our sinful nature (“All have sinned and fall short of the glory of God”). But Scripture never suggests we can deal with sin by indulging in sin. That’s just stupid. But even worse is the statement that additional sacrifices for sin are needed after the sacrifice of Jesus Christ on the cross. Owens really needs to spend time in Hebrews 10, wherein the author of the book explains that there is no sacrifice needed after that of Jesus. And in Hebrews 10:26: “If we deliberately keep on sinning after we have received the knowledge of the truth, no sacrifice for sins is left.” So, to use technical terminology for Owens and his congregation, if they continue in their ways, they are “screwed.”

Is there anything good to be said for this church? I can only think of one thing. The church architecture is nice. We learn that this church in Washington D.C. is one of four built on this site. The first was built by George Washington. (I believe the historians used for this film also worked on the National Treasure films.) A series of tunnels were built under the church prior to the First Civil War to be used by abolitionists. Toward the film’s climax (spoilers), a gang plots to use those tunnels to enter the church and assassinate Owens and all the other leaders of the NFFA party. But, you know, tunnels are always cool.

Even with the tunnels, though, Minister Edwidge Owens and his congregation earn our lowest Movie Church ranking of 1 Steeple.
Posted by churchandstates at 9:14 PM