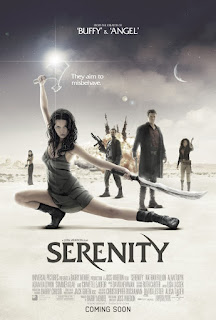 Usually, on Friday we publish a new post here at Movie Churches, and on Mondays, we post on the new blog, TV Churches. This month, we’ve been looking at science fiction films here, and at TV Churches, we’ve been looking at westerns. April ends with an intersection between the two: at TV Churches today, we’re posting about the short-lived cult favorite, Firefly .  It didn’t seem right to post about the feature film, Serenity, before we posted about the show that led to it.


The TV show followed the adventures of Captain Mal Reynolds (Nathan Fillion) and his crew as they sought to make a living with any work they could find, legal or otherwise. They also took passengers on the Firefly class ship, Serenity, and two of those passengers provided a plot line that the show’s cancelation left unresolved.

After Doctor Simon Tan (Sean Maher) rescues his sister, River (Summer Glau) from a government facility. The Alliance (seemingly the sole government of the universe) wants River back and seems willing to do anything to retrieve them. They were still running when the series ended.

Serenity, the film, reveals more of the reasons the government wants River and brings that hunt to a conclusion. As the film begins, a couple of series regulars aren't on the ship. Inara (Morena Baccarin) is living on a different planet, as is Shepherd Book (Ron Glass), but Book is remembered by the crew. When crewman Jayne Cobb (Adam Baldwin) wonders why the Reivers are such savage, beastlike killers, Kaylee (Jewel Staite) quotes Shepherd Book, “They was men who just reached the edge of space, saw a vast nothingness and went bibbledy over it.” (Considering that Book is a man of education and careful speech, it is unlikely this was an exact quote.) 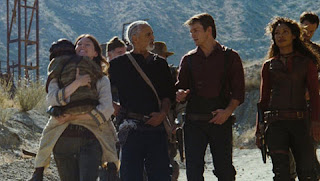 When Serenity is pursued by Alliance forces, the crew seeks haven at a planet called, well, "Haven." They are greeted by Shepherd Book. Mal thanks him for his hospitality.

“Hiding ain’t a plan?” Mal answers with a question. Book goes on to advise Mal about the best ways to deal with the Alliance.

Book: Only one thing going to walk you through this, Mal. Belief.

Mal: You know I always look to you for counsel, but sermons make me sleepy, Shepherd. I ain’t looking for help from on high. That’s a long wait for a train that don’t come.

Book: When I talk about belief, why do you always assume I’m talking about God? They’ll come at you sideways. That’s how they think. It’s how they move. Sidle up and smile. Hit you where you’re weak. Sort of man they’re like to send believes hard. Kills and never asks why.

Mal: It’s of interest to me how much you seem to know about that world.

Mal: You’ll have to tell me about that sometime.

And Book never does. The audience is also curious about the origin of Shepherd Book, but when we see Book again in the film, he’s dying. The Alliance attacks the people of Haven for assisting the Tans.

Mal finds Book as he speaks his last words.

Mal: It should have been me.

Book: That crossed my mind. I shot him down. I killed the ship that killed us. Not very Christian of me.

Mal: You did what’s right.

Book: Coming from you, that means almost nothing. I’m long gone.

Mal: No, Doc will bring you around. I look to be bored by many more sermons before you slip. Just don’t move.

Book: You can’t order me around, boy. I’m not one of your crew.

Book: I don’t care what you believe. Just believe it. Whatever you…

Which is odd, because the villain of the film, the Operative (Chiwetel Ejiofor), is a man who believes quite strongly, but in the wrong things. He believes there can be a universe without sin, and he can help the Alliance bring that about. He believes in false things and is willing to sacrifice himself and kill others for those beliefs.

Perhaps though, his reasoning is not unlike that G. K. Chesterton wrote about in his novel, The Ball and the Cross. That story tells of a Christian and a rationalist who battle, and Chesterton argues that at least the rationalist has the advantage of belief and the pursuit of truth.

Book put his faith in good things: in Mal and his crew, and more importantly, in the Christian Gospel --which is why we’re giving him our highest Movie Churches rating of Four Steeples.
Posted by churchandstates at 7:55 AM