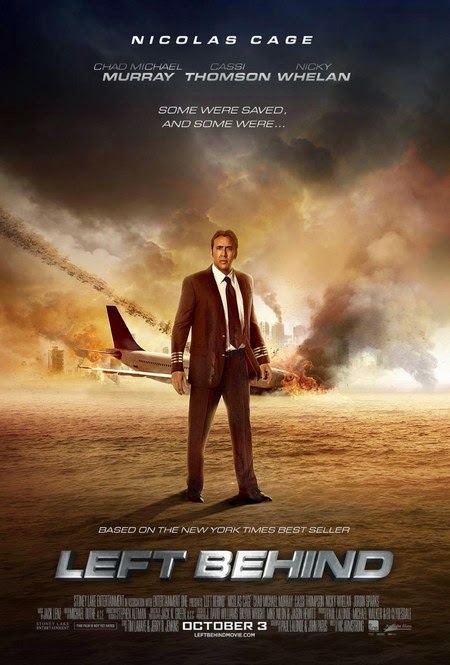 Left Behind (2014)
Last month we looked at churches in movies that were nominated for or won an Oscar for Best Picture. This film was also up for awards last month, for actor and screenplay and overall production -- but not for the Oscars. This film had multiple nominations for the Razzies, which are given for the worst achievements in filmmaking.

I can't tell you how faithful this book is to the first book in Tim LaHaye and Jerry Jenkins' bestselling series of novels, because I only made it a few pages into the reading. The book struck me as rather hackneyed, starting with the character names of airline pilot Ray Steele (Nick Cage) and news reporter Cam "Buck" Williams (Chad Michael Murray, who "Gilmore Girls" and "Agent Carter" fans may recognize as Special Agent Tristan). But from what I can tell, though the names haven't changed, the plot has been in the transition from book to film.

The film is in many ways a remake of the widely reviled disaster film "Airport 1975" (which was released, incidentally, in 1975). Both films are about a commercial jetliner that collides with a small commercial plane and the bulk of the film deals with the attempt to safely land the jet. The slight difference in the plots of the two films is that in the first film, the collision is caused by the small plane's pilot having a heart attack, wherein this film has the small plane's pilot vanish in the Rapture, God's homecoming for millions of His people.

The action, writing, and acting hit great heights of cheesiness. In one scene, Steele's daughter, Chloe, returns home from college and is greeted by her little brother, Raymie. The brother asks, "Did you buy me a present at the airport?" Because, being the son of an airline pilot, the kid knows all the best shopping deals are found at airports. She lets the kid look in her bag and he exclaims, "A new baseball mitt? That's just what I've been asking for!" I don't know which is odder: that the kid is surprised to get what he's been asking for or that Cloe managed to find a baseball mitt at an airport.

The special effects are CGI of a "Sharknado" level of excellence. We get end-of-the-world vanishings, car crashes, and fires. And there is no more special effect in films these days than Nic Cage going all manic. The whole thing is really horrible but vastly entertaining.

Fortunately, these reviews aren't about the quality of the film, which is, you may have discerned, awful, but about churches in the film. It's not even about the theology of the film; which is, if you are concerned about such things, written from a dispensational, premillennial, pre-tribulation perspective. Now I'm not at all sure that this is how God is going to do things, but I'm pretty sure the End Times won't have a Sci-Fi channel vibe to it.

No, I'm not here to review the quality of the film or its theology, but just the church in the film. After the rapture and while Ray and Buck are trying to land that plane (which also has gun-toting crazy mother Jordin Sparks on board), Chloe goes to her mother Irene's church.

Chloe's mom's to decision to become Christian had caused conflict with her husband, Ray. (Pre-rapture, Raymie told Chloe their dad said, "Pastor Barnes was washing mom's brain." What Ray probably really said was "Pastor Barnes brainwashed your mom". But the kid misstates the phrase for comic effect. The film is full of humor like that.)

Anyway, after the rapture, Chloe goes to her mom's church. It's empty, except for Pastor Barnes. Chloe asks how he could still be there since all the Christians were supposedly taken in the rapture. Pastor Barnes says that though he preached about faith in Jesus and the rapture, he'd never believed it.

Which poses an interesting question: Is a church doing worthwhile work if it preaches the Word truly, but the pastor doesn't believe it? After all, at least Irene came to faith and was raptured. Raymie was raptured as well, but it's never clear whether he came to faith or this rapture had relatively high criteria for the age of accountability.

Overall, though, I wouldn't want to go to a church where the pastor doesn't believe what he's saying. Now as for this church in a post-rapture state, it might be nice to visit for the quiet.

Posted by churchandstates at 6:03 AM