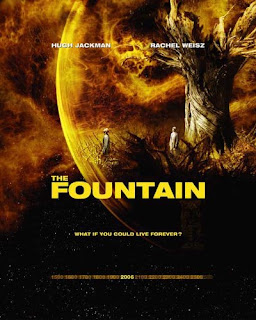 The Fountain (2006)
The Fountain opens with a verse from the very beginning of the Bible, Genesis 3: 24, “After He drove the man out, He placed on the east side of the Garden of Eden cherubim and a flaming sword flashing back and forth to guard the way of the tree of life.” The man mentioned is, of course, Adam. After Adam and Eve rebelled against God by eating of the Tree of Knowledge, God kicked them out of the Garden of Eden and set up a guard to prevent them from eating of the Tree of Life that would make them immortal.

This 2006 film, written and directed by Darren Aronofsky, is about a search for the source of immortality, the Fountain or the Tree of Life. It is also a film that is really, really strange. There are three storylines threaded together: a contemporary story of a scientist researching a cure for the disease that is killing his wife, a mystic future time traveler seeking a source of immortality, and the story of the first character seen in the film, a conquistador named Tomas (Hugh Jackman, playing a role in all three stories) who battles two priests, one Mayan and the other, the Grand Inquisitor. Since this is a blog about Christian churches and clergy, I’m really only interested in that story set during the Spanish Inquisition. 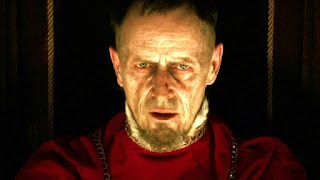 Tomas has been commissioned by Queen Isabella (Rachel Weisz, also in all three stories) to find the Tree of Life in the Garden of Eden, believed to be located in the New World. But his search is opposed by the Spanish Inquisition. The Inquisitor seems to believe he is doing the work of the angels commissioned in Genesis 3 -- which does provide an interesting tension. Shouldn’t we honor God’s command found there? Wouldn’t a search for the Tree of Life be opposed? Especially since God provided another source of immortality found in the Cross and the Gospel of Jesus Christ.

But this Inquisitor is not a person to root for. Historically, governments initiated prosecution of heretics and the church was usually less fierce in prosecuting unbelievers, seeking redemption rather than punishment, yet this Inquisitor wants to kill people. He says that he will seek confessions, then kill the confessors -- which makes no sense. He has the victims held upside down by chains, then dropped to their deaths. So this representative of the Catholic Church, the Grand Inquisitor, receives our lowest rating of One Steeple. The Inquisitors of history were more complex.