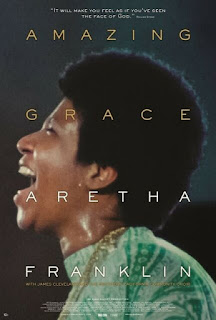 Amazing Grace (2018)
Recently we were talking with a friend who sings in our church choir. She wishes people wouldn’t applaud at the conclusion of an anthem in church because it's worship rather than performance.

I have sympathy with this view. Mindy mentioned that she appreciated a church in Nashville where the musicians played off to the side of the sanctuary, where they couldn’t be seen. But this week we saw a movie that wouldn't exist if you ruled out performance in churches altogether -- a wonderful “new” concert film called Amazing Grace.

I put the quotes around the word "new" because this film now in theaters was filmed back in 1972. At that time, Aretha Franklin decided to make an album of Gospel music and to record it in a church. Director Sydney Pollack was brought in to record the event, apparently for television, but mistakes were made.

The film crew didn’t use clapper boards to mark sequences in the film, so they lost track of which audio tracks went with the film. The Queen of Soul's performance at New Temple Missionary Baptist Church was released as an album, but the film never was. Computer technology allowed the film to finally be put together and released.

And what a performance it was.

Franklin possesses one of the greatest voices to ever sing blues, rock, pop, and soul. She was featured in the best Blues (and car crash) movie ever made. And she has an amazing voice for Gospel music. She sings classic songs such as the title tune and “What a Friend We Have in Jesus,” but she also sings James Taylor’s “You’ve Got a Friend” as Gospel. She gives her all, sweat glistening on her brow. She is backed up by a full choir.

The choir's leader, the Rev. James Cleveland, makes it clear that this is a “religious service,” not just a performance. The name of Jesus is continually raised and praised. Aretha’s father, the Rev. Carl Franklin, came to the event as well. He mentioned how a woman had told him she hoped Aretha would come back to the church, and Franklin assured her, “Aretha has never left the church.”

The music is wonderful, and for that alone I’d urge you to see this film. But there is one more bonus to watching Amazing Grace. The choir's assistant director is named Alexander Hamilton. I don’t know if he was named after the founding father, but I do know you that Amazing Grace affords you the opportunity to tell people, honestly, “I’m going to see Hamilton at the theater” without spending $1000 for a ticket.

This is a church service I (like Mick Jagger) would very much like to have attended. This movie church earns our highest rating of 4 Steeples.
Posted by churchandstates at 8:54 PM