Apocalypse Month takes off: The Rapture 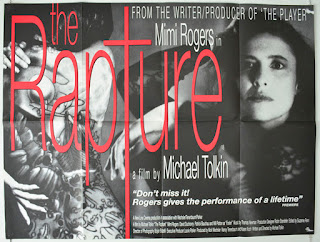 The previous biblical apocalypses we watched earlier this month -- at best -- set things in motion for the end of the world. Finally, with The Rapture, there's no more hemming or hawing. Everything comes crashing down, the world ends.

The film was written and directed by Michael Tolkin. Tolkin is the grandson of Romania and Ukrainian Jewish refugees, but his parents were in show business. His mother, Edith, was a show business lawyer and studio executive and his father, Mel, was a writer on Sid Caesar’s Your Show of Shows along with Mel Brooks and Neil Simon. Michael Tolkin wrote one of the great books about the movie business, The Player (which was made into a film.)
This film is far from the world of show business.

Sharon (Mimi Rogers), is a telephone operator who, with her boyfriend, Vic (Patrick Bauchau), cruises bars throughout Los Angeles looking for couples to have sex with for the night. (These early scenes are rather explicit.)

Sharon is not satisfied. She begins to spend time with Randy (David Duchovny), one of the men she and Vic met on their outings. She talks to Randy about her feeling; he suggests she is depressed and should see a therapist. She doesn’t follow his advice.

In the break room at her work, she hears people discussing “the Boy” and “the Pearl” but also prayer. Then two men come to her door, dressed in white shirts and ties like Mormon missionaries but also in dress jackets. They tell Sharon these are the last days and she should accept Jesus as her Lord and Savior. One of the men asks, “Do you know the difference between righteousness and faith?”

Sharon asks, “What if I lead a good life? Will I be saved?”
One of the men responds, “Do you really live a good life?”
She has no answer, but asks, “Who’s the boy?” The men are taken aback but don’t respond. When one of them recites John 3:16, she asks, “Am I supposed to buy this?”
“No, it’s a gift,” one of the men answers, giving her a Gideon New Testament as they leave.

Sharon begins to read the Bible and pray. She goes off on the road, steals a gun from a hitchhiker and contemplates using the gun on herself, but she has a vision of “the Pearl.” She believes she’s been saved. 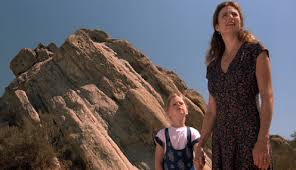 She goes to see Vic who notices something different, “You’ve changed. That goofy smile. You met a guy.”
Sharon answers, “Well, ‘guy’ is not exactly the word I would use for him. He knows everything. You should meet him. You could love him too.”
“You fell for some homosexual,” Vic laughs.
“He’s Jesus Christ, the Son of God. You can’t understand, and I understand. There is no cult, only God and His message of Love.”
And that’s pretty much the last we see of Vic.

At work, Sharon begins to talk to people on her calls about Jesus. She gets called in by her boss about this. He notes that her average call time had gone up from fifteen seconds to two and a half minutes, but he doesn’t fire her, saying, “Trust in God and take it easy on the phones.”
Sharon asks her boss about “the Boy," and the boss knows. The Boy is his son.

The Boy, six or seven years old, comes to visit a meeting of believers in the breakroom at Sharon’s work. He assures them all that Christ is coming, but they will need to “wait five, six years.” The meeting ends with all embracing each other.

Sharon goes back to Randy and tells him that she knows he is as lost as she was --  and he can know God. Randy says he isn’t sure he can pray, and Sharon says she’ll pray for the both of them.

We see Sharon and Randy again six years later, standing in a church with their daughter. The Boy (a different actor because it is six years later) is preaching to the congregation that “the Rapture is coming soon, later this year.”

Then tragedy strikes. Randy is meeting with an employee, telling him they've done everything they could for him. They set him up with a counselor (“He was a homo,” the man says) and directed him to AA (“A group of losers”), but he had refused all their help.
“So just say it, I’m fired,” he says. The man comes back to the office with a rifle and shoots one employee after another. Randy approaches the man, who says, “I don’t have to listen to any more of your sermons,” before shooting Randy dead.

Mary, Sharon and Randy's young daughter, asks her mother about her father. When Sharon says he’s in heaven, Mary asks, “Where is heaven?”
Sharon asks her, “Mary, do you love Baby Jesus? Then you’ll see Him soon.”

At church, Sharon tells about a vision she had to meet God in the desert and asks others to go with her. The Boy is the one who answers, “You are the only one who hears these calls. It could be Satan. And since no one else received the vision, we can’t go with you. Don’t ask God to meet you halfway.”
It's hard to think of less helpful counsel. He notes it could be a demonic plan, but since it could be from God she needs to pursue it.

So Sharon takes her daughter to camp in the desert, and they wait with no means of support. They are exposed to the elements and begin to starve. (Sharon resorts to dining and dashing when she orders from a drive-thru and drives off without paying.)

She comes to believe that God has deserted her. She asks Mary to assure her she loves Jesus. When Mary does, and Sharon is sure Mary will go to heaven, she shoots Mary in the head. Sharon considers killing herself, but won’t. When a local sheriff arrests her, she explains that Mary could go to heaven if she was killed, but Sharon couldn’t kill herself because she had been taught suicides don’t go to heaven. (We’ve come across the idea that suicides don’t go to heaven in a number of films, such as Silver Bullet and God’s Club, but it doesn’t come from Scripture.)

Now that Sharon's lost her faith in God, we get the real twist. The trumpets blow and Christ does come again.

Mary is brought back to Sharon to tell her mother that she can still go to heaven if she’ll just love God. Sharon responds that she can’t love a God that would allow her husband to die and would allow her to shoot her own daughter.
Sharon asks, “Why can’t I ask God why He allows suffering?” (Actually, throughout the Bible and in history, God has allowed that question to be asked. He even answers the question to a degree in places like the book of Job.) Sharon will not love God, so Randy, Mary, and even the sheriff go to Heaven, but Sharon is left to an eternity without God. 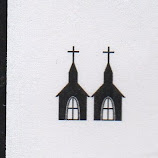 It does seem that the church that allowed the Boy to lead it is partly responsible. In various New Testament epistles, guidelines of leadership are given. For example, in I Timothy 3:6 Paul says he doesn’t allow a new believer to be an elder because he may become conceited. A level of maturity is expected for leadership that the Boy obviously lacked and that didn’t serve Sharon well. On the other hand, Randy seemed to have been taught well, somewhere, because he became a caring and compassionate believer. Maybe the church helped with that, which keeps the church in The Rapture from getting our lowest Steeple rating, ranking in at Two.
But the end of the world brings the highest Apocalypse rating of the month, Four Tombstones.

Posted by churchandstates at 9:00 PM