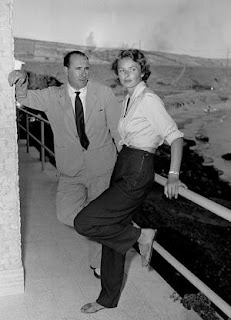 I have to admit something before we get started. For a long time, all I knew about Roberto Rossellini was that he had an affair with Ingrid Bergman.
When you read about old-time Hollywood, this was a big deal. Not that Hollywood stars weren’t having affairs left and right back in the day, but the studios' PR people were usually pretty good about covering things up. When the actress who played Sister Mary in The Bells of St. Mary's was found to be with child while married to someone who wasn't the baby's father, it got some notice.
For a while, groups in the Roman Catholic Church tried to organize boycotts of Bergman's work, and she needed to go to Europe to make films. The scandal was all the more serious because Rossellini was also married to someone else when he fathered Bergman’s child. Rossellini divorced his wife to marry Bergman (and Bergman divorced her husband to marry Rossellini) as you might have guessed if you’ve ever seen a film with Isabella Rossellini. Rossellini did eventually cheat on Bergman, the marriage was annulled, and both married others.

Until recently I hadn’t watched any of Rossellini’s films. I knew he was the father of “Neo-Realism” and that sounded awfully dull. When I was given a gift subscription to the Criterion Channel for Fathers' Day, I finally got around to watching my first Rossellini film, Rome, Open City.
It was really good.
More importantly (for this blog, anyway) a priest played a big role in the film. I started to research more about Rossellini and found he made a lot of films that prominently feature the Catholic faith. Though he wasn’t religious himself, he was very interested in Christian values and considered it a loss that Catholic ethics were neglected in an increasingly materialistic world.

I had three months of the Criterion Channel, so I did a little research. Were there enough Rossellini films featuring churches or clergy? It turns out there were more than enough. I couldn't cover all the films I wanted to, so I hope I can fit them in with the themes of upcoming months.
So if you suffer, as I did, from Rossellini ignorance, this is a good month for you to turn that around, starting this Friday with Rome, Open City.
Posted by churchandstates at 8:46 PM