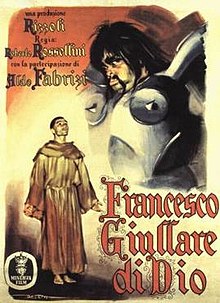 It’s an episodic film that Rossellini co-wrote with Federico Fellini based on works from the 14th century (Little Flowers of St. Francis and The Life of St. Juniper.) Their “frat house” is a church, St. Mary of the Angels, where Francis lives with his brothers, his disciples -- many of them not very bright.

Rossellini used many of his techniques of neorealism to make this historical comedy/drama. As in previous films, he chiefly used non-professional actors.  The Brothers are played by monks from the Nocere Inferiore Monastery. The role of St. Francis is not credited in the film but was played by Brother Nazario Gerardi.

But, you ask, how is this film like a frat comedy? Well, let’s compare it to the TBS perennial, Old School, with the comic highlight of a streaking Will Ferrell. The Flowers of St Francis also finds comedy in a naked brother: Ginepro, who gives away his habit to a poor beggar and then hides in the bushes. He is gently admonished by St. Francis, who never mentions that he began his ministry giving away all he had, including his clothes. (If you doubt, watch a previous entry in Movie Churches, Brother Sun, Sister Moon.)

National Lampoon’s Animal House has that unsettling episode of animal cruelty when a horse is accidentally killed in the Dean’s Office and must be removed using a chain saw. In this film, Brothers Ginepro and Giovanni are caring for Brother Amarsebello who has been fasting too long. Amarsebello has lost his taste for the food offered to him but says he could go for a pig’s foot stew. Ginepro goes to find a farmer’s swine and cuts the foot off one of the pigs, leaving the pig alive. The upset farmer kills the pig, gives the meat to the brothers, and tells them not to get near his pigs again. 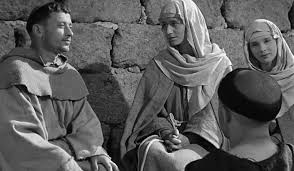 Though frat comedies are about the guys, campus films usually have a place for love interests, often with scenes of the frats and sororities getting together. Van Wilder, with Ryan Reynolds as a seventh-year senior, finds love with fellow student Gwen Pearson (played by Tara Reid). Francis and his brothers have a party, a dinner party, with St. Clare and the sisters of her order. They all have a common love interest, who happens to be Jesus.

Frat comedies often exult in a celebration of the underdog, perhaps most notably in Revenge of the Nerds in which all of the outcasts of the college become the heroes. Is there a more iconic outcast than the leper? In one scene of Flowers, Francis is alone in the woods at night in prayer. He hears the bells of a leper and pursues the man, seeking to kiss and embrace the diseased man as the leper attempts to keep his distance. Francis thanks God for this chance to be with such a man. 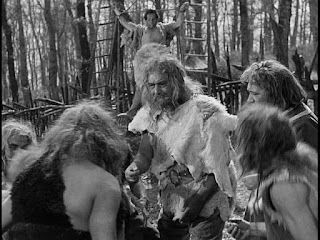 In Neighbors, Seth Rogan and Rose Byrne play a married couple with a new baby who find their lives unsettled when a barbarous fraternity moves in next door, and they go to war with its residents. Brother Ginepro is forced to deal with real barbarians when the tyrant Nicolacio takes over a neighboring town. Ginepro goes to preach to the men and is beaten and threatened with the gallows. But Nicolacio becomes flustered by Ginepro’s humility and calls off the hanging and his siege. 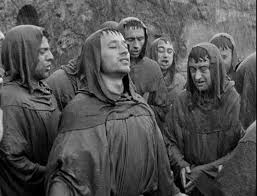 Of course, a standard trope in frat comedies is when brothers take the Oath to show their allegiance to the fraternity. In Animal House, the pledges are instructed to repeat after the leader, so when the leader reads, “I, state your name,” they repeat, “I, state your name,” followed by, “Do hereby pledge allegiance to the frat,” which they repeat, “Do hereby pledge allegiance to the frat,” and then the leader says, “With liberty and fraternity for all,” and the pledges respond, “Amen.” The brothers in Flowers can join in on a much more inspirational and profound pledge/prayer together, the familiar, “Lord, make me be an instrument of your peace.”

Eventually, the time comes to move on, as Benjamin Braddock discovered in The Graduate. So Francis and his Brothers decide it is time to part and spread their message of peace in the Gospel of Jesus Christ to the whole world. They sing together as they say their goodbyes. It really makes you want to Shout!.

So we give Francis and his order of zany brothers our highest Movie Churches Rating of Four Steeples.
Posted by churchandstates at 7:03 PM