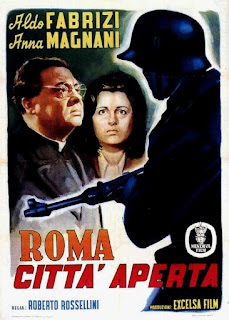 The story behind Roberto Rossellini’s Rome, Open City could make an excellent film itself. In 1944, because of World War II, there was no longer a viable Italian film industry. Rossellini had no resources to make a film, but a wealthy elderly woman in Rome offered Rossellini money to make a film about Don Peito Morosini, a Catholic priest who aided the anti-German partisan movement in Italy and was killed by the Nazis. Just a few months after the Allied forces drove the Nazis out of Rome, Rossellini began filming.

Shooting on the film began in January of 1945 (the European war part of the war didn’t end until May of that year). Because of the scarcity of funds and resources, Rossellini adopted what became known as the “Neo-Realistic style." The term was coined to describe a crude, documentary method of film making. A few actors (even stars) were hired, but mainly a non-professional cast was used. The war-devastated city provided an incredible setting.

Rossellini’s funds ran short, and he ran out of film, but the U.S. Army came to the rescue. To be more precise, a U.S. soldier came to the rescue. Rod Geiger of the Signal Corps had access to his unit’s film supplies, and he provided Rossellini with film scraps and whole reels that had scratches or other flaws that made them unfit for official U.S. Army use, but Rossellini found ways to make use of them.
His film was completed and went on to be nominated for an Academy Award for Best Screenplay. It also won the first post-war Grand Prize of the Cannes Film Festival. 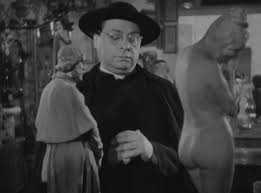 Don Peito Morosini, the real-life resistance fighter, becomes Father Pietro Pelligrini (Aldo Fabrizia) in the reel version. The movie priest has some endearing quirks. We first see the priest reffing a boys’ football (American soccer) game. We see him do a head-shot and instruct the boys, “I’ve told you before, no rough stuff.” When he is called away from the game to help a member of the resistance, he gives his whistle to a young boy take over as referee.
Later in the film, we see the priest enter a statuary store, pretending to shop, but actually, he's about to meet a Resistance contact. Father Pietro asks the proprietor, “Have you a statue of St. Antony the Abbott?” While waiting in the store, the priest turns the statue of a (male) saint away from the statue of a naked woman. (O/T, why aren’t there more statuary stores around these days?)

The priest agrees to marry a couple.but first he urges them to get right with God. The bride-to-be says to him, “My last confession was so long ago, you won’t understand.”
He responds, “Doesn’t Christ see us?” and he still performs the ceremony. 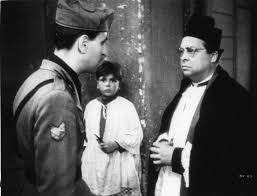 The chief work we see Father Pietro do is in support of the Resistance against the Nazi occupiers. While delivering funds for a Resistance fighter hiding in a monastery, he is asked why he is helping. He says simply, “It is my duty to help those in need.” (He hides the funds in a book with the insides cut out. A man who sees him criticizes the priest for spending money on books while people are starving).

When the Nazis obtain information that the Resistance is hiding explosives in an apartment building, the priest comes to help. All the residents of the building have been asked to leave the building. But the priest tells the Nazis he must enter the building to “comfort the sick." A paralyzed man on one of the upper floors is still in his bed. Along with one of his altar boys, the priest gets the explosives and hides them under the sick man's bed. The man won’t stay quiet about this, so the priest knocks him unconscious so the man won’t alert the soldiers. (Not something I remember coming up in my pastoral duties classes.)

The priest leads a mass for Resistance fighters in rooms in the back of his church where he also prepares false papers, such as baptismal certificates. (When he gives a false certificate to one man, the man says, “You made me two years younger. Thank you, Father.”)

When Father Pietro is betrayed and arrested by the Gestapo, he is held prisoner along with a Communist and a German soldier who aided the Resistance. The Nazis interrogate the priest, but he only tells them, “I know nothing. What little I know I heard in confession, and those secrets must die with me. It’s our vow. But someone else is higher than you and me. I only know a man of modest needs who was in need of my help.”

He is asked by the Nazis why he is willing to work with a Communist, Giorgio (Marcello Pagliero), a man opposed to his faith. The priest answers, “I am a Catholic priest. I believe that anyone fighting for justice and liberty walks in the ways of the Lord and the ways of the Lord are infinite.”

Though the soldiers will not torture the priest, they tell him they will torture Giorgio if Father Pietro won't talk. They use whips and blowtorches to torture Giorgio, killing him. The priest gives last rites to his dead friend.

The German commandant, Major Bergmann (Harry Feist), says to the priest “This is your Christian charity!” pointing to the body.

The priest explodes, “Curse you all! You’ll be trampled in the dust like a worm!” But he quickly repents of his words saying, “My God, what have I said? Forgive me, Lord.”

But the Nazis do not forgive the priest. Instead, they order his execution. As Father Pietro is taken to a field to meet a firing squad, he is accompanied by another priest who tells him, “Be brave!”
Pietro responds, “Oh, it’s not hard to die a good death. What’s hard is to live a good life.”

“Father, forgive them…” the priest says as the bullets pierce his body.

Rome, Open City was the beginning of Rossellini’s career. Rossellini month at Movie Churches opens auspiciously with a Four Steeple Rating for this movie's priest, Don Pietro Pellegrini.
Posted by churchandstates at 9:06 PM