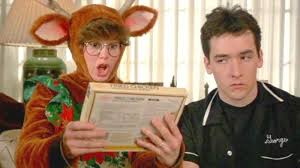 It’s December, so we here at Movie Churches really want to spend the month doing Christmas films, but we're afraid we're running short on films that feature Christmas and churches. We focussed on the big ones early on: The Bishop’s Wife, The Preacher’s Wife, The Bells of St. Mary, Home Alone, etc. (So many of the Christmas biggies, White Christmas, Bad Santa, Santa Claus Conquers the Martians have virtually no churches or clergy whatsoever.) We’ve found some interesting Christmas films with significant ecclesiastical details, but it’s been getting tougher as the years have gone on.

Sadly, a great film such as Better Off Dead doesn’t qualify, even though it does have a prolonged Christmas sequence with the protagonist, Lane Meyer (John Cusack), giving his girlfriend an inadequate Christmas present and his mother dressing as a reindeer -- and plenty of snow. Although Lane almost runs over some nuns while drag racing, the film is generally lacking in clergy.

Ghostbusters II is set in New York City at Christmas time, so we can see decorations in many scenes. You would think a film that features demonic possession would throw in a priest with an exorcism, but the film deals with such things with “science.” 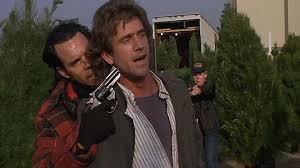 Shane Black’s action thrillers often have a Christmas element, but rarely a church element. Mel Gibson’s Martin Riggs in Lethal Weapon is dealing with suicidal tendencies brought on by the loss of his wife, but does he seek spiritual aid from his local diocese? He does not. Christmas is an element, though -- the first bloody fight of the film is on a seasonal tree lot.

We can't wait to get this Christmas season started.
Posted by churchandstates at 10:06 PM