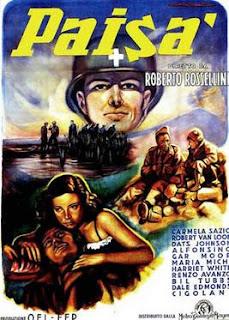 Roberto Rossellini’s second film, Paisan, was (like Rome, Open City) set in World War II Italy and filmed shortly after the war ended. By necessity, the director used the same neorealistic technique as in the first film, but used it quite effectively. The battered landscape and ruins of buildings are the genuine article, not a set created on a soundstage.
Paisan is an anthology film about the campaign of the Allied forces through Italy. As in the previous film, most of the actors aren't professionals, but people rather like the characters they play in the movie, including some American soldiers.

The story unfolds in six sections, with documentary footage between each section, and fully a third of the stories suit our purposes here at Movie Churches.
The first episode takes place during the Allied invasion of Sicily. The Germans had been in control of the island, but as they battle the Allies, a large group of civilians -- primarily women, children, and the elderly -- gather in a Roman Catholic Church for safety. A group of soldiers approaches the church, but those inside are unsure which side the soldiers are on.

Episode 5 is set in a 500-year-old monastery, where monks have endured as battle has raged outside their walls. And they are not alone; they have chickens. (My wife is much more inclined to like a film if the film has chickens.) They actually have a variety of animals -- sheep and goats, and a cow that villagers entrusted to the monks so the creatures would stay out of the hands of the Nazis while the war continued.

As the war has moved beyond the community, the people return to collect their animals, and the monks give them gladly. Together they kneel and pray, “Brothers, let us thank our Lord who delivered us from danger.” 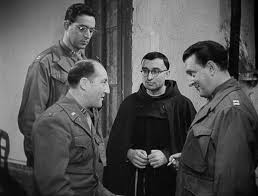 The monks refuse the cigarettes the chaplains offer, but accept some Hershey bars. In return, the monks offer the chaplains liqueur made from their homegrown apples, accepted by Captains Martin and Feldman, but refused by Captain Jones (“I never touch the stuff.”)

The monks invite the chaplains to dinner, realizing they have only meager supplies left for the meal, but the chaplains chip in with some canned foods. The monks marvel at the canned milk. The villagers again offer the monks their animals for use (chicken dinner.)

The monks soon learn distressing news: Captain Martin is the only Catholic among the chaplains. Jones is Lutheran and Feldman is Jewish. This worries them greatly. “Merciful Saint Francis!” one of the monks exclaims.
When one of the monks learns the denomination of Jones he frets, “The heresy of Luther is the worst of all Protestants!”

The Father Superior is quite concerned about these “two lost souls” but also says, “No soul is lost while it still has life and a will to be saved. There are always opportunities for redemption. We can do something for these brothers.” He finds a time to talk with Chaplain Martin alone.

“May I ask you a question, Father?” The monk says to the chaplain, “Have you lived long with these two other priests (sic)?”

“We’ve been together the entire Italian campaign, twenty, no twenty-one months,” Martin responds, “They’re good and dear friends, I admire them very much.”

“Have you ever tried to lead them to the true religion?”

“But Father, the Protestant and the Jew are just as convinced they are on the true path.”

“But we know they are in error. We must try by every means possible to save those two souls that could be lost.”

“I am a Catholic, Father, and a priest and I humbly believe I am a good Catholic,” Martin says.

“Forgive me, Father, I didn’t mean to remind you of your duties,” the Father Superior replies. “I just meant you are military chaplains. Your duties expose yourselves to the same risks and dangers as soldiers. Have you thought your two companions might perish any day?”

“I never felt I could judge them,” Martin says. “I know them well, they are good friends. I don’t feel guilty, my conscience is clear.”

The monk does not seem persuaded.

When the chaplains arrive for dinner, they are told to keep silent through the meal without exception.

But one of the monks speaks during the dinner, first reciting the names of their fellow monks who have gone on to “a better life,” including those that died during the war.

The chaplains are shocked that they are served the meal, but the monks are not. The Father Superior explains, “We’re fasting because providence has sent two brothers on which the light of the Gospel’s light must descend. Our hope is that with this humble sacrifice we might receive a heavenly reward.”

Chaplain Martin can’t keep quiet, “Forgive me if I don’t follow your rule but I wish to speak. I must tell you you have given me such a great gift that I feel forever in your debt. Here I’ve found that peace of mind that I’d lost amid the horrors and misfortunes of war. A beautiful and moving witness in humility, simplicity, and pure faith.”

As a Protestant, I don’t agree with the Father Superior that it means I'm lost. But I agree with the Catholic chaplain that the monks acting on their beliefs is admirable. What he said reminded me of something the magician and atheist Penn Jillette said once about a man who shared his Christian faith with him, “He was kind, and nice, and sane, and looked me in the eyes, and talked to me, and then gave me a Bible. I’ve always said I don’t respect people who don’t proselytize. I don’t respect that at all. If you believe there is a heaven and hell, and people could be going to hell or not getting eternal life or whatever, and you think it’s not really worth telling them because it would make it socially awkward.”

I agree with Penn about the admirable concern about the souls of others, and that is why we’re awarding the monks of the monastery in Paisan our highest Movie Churches rating of Four Steeples.

Posted by churchandstates at 7:25 PM