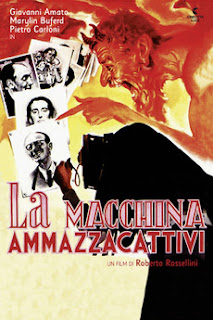 The Machine to Kill Bad People (La Macchina Ammazzacattivi) (1952)
The Machine to Kill Bad People is a profoundly weird film. Directed by Roberto Rossellini in 1952, it was a great departure from his acclaimed neorealistic style. (To be fair, he directed most of the film. It was a troubled production; Rossellini quit before the film was finished. The producers let an assistant director complete the film, and it was released without Rossellini’s consent.)

Unlike Rossellini's neorealistic films, which were often nearly docudramas, this film is a fantasy and a comedy. The opening makes this clear: the setting is presented as a model, with human hands arranging an island, the buildings, the clouds.

A small town located on the island is celebrating the Feast of St. Andrew (Andrea), an Italian saint who saved the nation from Turkish invasion. The whole village celebrates with a procession that begins and ends in the local Catholic Church.

We are then introduced to our protagonist, Celestino Esposito (Gennaro Pisano), a small-town photographer who is concerned about the financial future and moral climate of his village. Fishing has been the primary local industry, but an American businessman has come to town, looking to build a hotel and bring tourism dollars. He also brought along his niece who, um, has less restrictive sexual mores than is the local custom. The American is working with a town council member who collaborated with the Fascists during the war.

Esposito is greeted by an old man who claims to be Saint Andrew himself. He gives the photographer a special gift, a camera that will kill whoever it photographs. (In fact, it will even kill the person if a photograph is taken of another photograph of that person.) Esposito discovers the camera’s powers accidentally, killing the Fascist on the town council. 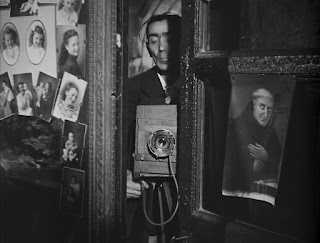 Esposito desires to use his new power only for good, and so consults with the local priest about the town’s problems. But the priest seems more concerned about getting money for rebuilding his church structure than anything else. The priest remarks, “This is a godsend for us. We can finally demolish this old church. I can’t stand this fake baroque anymore. We’ll bring back the ancient Byzantine Basilica. I’ll have porphyry columns and real mosaics on the walls.”

In fact, most people in the town seem to be motivated by greed or lust, so Esposito finds many people that he believes are worth killing with his camera.

If this film had been made today, most everyone writing about the film would say it was a commentary on current cancel culture. Like the photographer in the film, many people consider themselves to be such pristine moral creatures that they are capable of deciding who in history is worth remembrance and who should be erased, along with who in contemporary culture deserves to be heard and who doesn’t. In the film, Esposito starts by judging a man who was clearly a Nazi, but goes on to judge the most minor of hypocrisies as capital crimes. Esposito clearly seems to have forgotten Jesus’ words from Matthew 7:1, “Do not judge, or you too will be judged.”

In the end, we learn that it wasn’t St. Andrew that came to the photographer but the Devil himself. Because this is a comedy, all of the dead are brought back to life, and lessons are learned.

As for the Movie Churches Steeple rating, if we were judging this film by the greedy priest mentioned earlier, things would be truly dark. But a kindly old priest raises the rating. He is there to comfort the grieving in the town and encourages the family of one of the deceased saying, “He’s a simple soul, it will be easier for him to enter the kingdom of Heaven.” We give the church and clergy of The Machine to Kill Bad People a Two Steeple rating.

Posted by churchandstates at 8:41 PM