Apocalypse Month Creeps On: The Omen 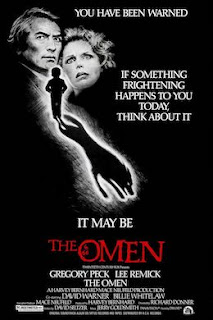 Adoption often comes across poorly in films. For instance, in Philomena (a film we must get to soon), the Catholic Church is shown to practice forced adoptions. Thrillers like The Glass House continues the long tradition -- going back to Cinderella if not before -- of young people being adopted by horrible parents. Documentaries like Three Identical Strangers show terrible things done by terrible adoption agencies, but these portrayals are pikers of awfulness compared to the adoption in The Omen.

Director Richard Donner’s 1976 apocalyptic horror film was the first Hollywood film that depicted the “Biblical” end of the world (low budget Christian films were there first), and it was a big hit. Perhaps this is because of the depiction of prophecies coming to life, or perhaps it's because of the gaudy, gory, gruesome deaths by decapitation, impaling, hanging, and more.

The film opens on June 6th at 6:00 am in Rome. (If you didn’t notice, that time and date works out to "666," the Number of the Beast in Revelation 13:18. This number will be repeated unceasingly.) We meet Ambassador Robert Thorn (Gregory Peck) who has just learned that his only son has died at birth. Thorn is met by Father Spiletto (Martin Benson), who tells him that there just happens to be another baby who was born at the same time whose mother has died. Why not give that baby to Mrs. Thorn (Lee Remick) and spare her the pesky grieving over the death of her own child? What could possibly go wrong?

The priest says, “If I may suggest, it even resembles. The mother would never know. It would be a blessing to her and the child. On this night, God has given you a child.”

Thorn agrees to the deception and tells his wife, Katherine, that their baby is a healthy little boy they will name Damien. In Thorn’s conversation with the priest (and a quiet nun holding the baby), there is no discussion about possible complications of such a deception. What if there are medical complications in the future and transplants or transfusions are needed? What if people notice there is not much similarity between Damien and his father and ugly rumors of infidelity emerge? What if Katherine realizes she can't trust her husband to be truthful?
Fortunately, none of these scenarios occur. It just turns out that Damien is Satan’s spawn, the Antichrist. 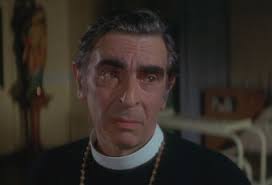 Initially, life goes well for the Thorns, already a family of wealth and great political and social connections. Thorn is appointed ambassador to Great Britain (a position Thorn takes without consulting his wife). There is talk of Ambassador Thorn running for the presidency.

But on Damien’s fifth birthday, odd things occur. Damien’s nanny commits suicide, and just before hanging herself in view of the child’s birthday cries out, “It’s all for you, Damien!”

After this incident, Ambassador Thorn finds himself pursued by two men; a reporter by the name of Keith Jennings (David Warner) and a priest by the name of Father Brennen (Patrick Troughton).

Father Brennen is admitted to Thorn’s office, claiming to have information about a private matter of much importance. Upon entering the office, the priest says, “Mr. Thorn, we haven’t much time. You must accept Jesus Christ the Lord as your Savior. You must do it now.” (I must admit I was impressed by the man’s fearlessly direct form of evangelism.) 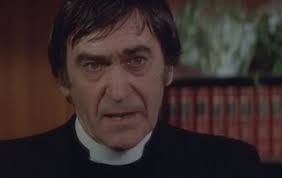 The priest says, “You must take Communion and eat Christ’s flesh. You must have Christ in you if you’re going to defeat the Son of the Devil. He’s killed once. He’ll kill again. He’ll kill until everything that is yours is his. He’ll keep killing unless you fight him. Accept the Lord Jesus, drink His blood. I’ve locked the door, Mr. Thorn. I was at the hospital, the night your son was born. I witnessed the birth. I beg you.”
The priest’s first statement was quite clear, but this follow-up should probably have been rethought and revised for clarity. Thorn is understandably confused and asks if this is an attempt at blackmail.
The priest says he is there to obtain Thorn’s forgiveness. He was there the night of the stealth adoption and knows that Thorn’s son is not human. Before he can explain more, the security that Thorn has summoned arrives and escorts Father Brennen away. As the priest is hustled out the door he cries again, “Accept Christ each day! Drink His blood!” (I’m from the tradition that you need to accept Christ as Savior only once, but I must admire the priest’s persistence in staying on point.) 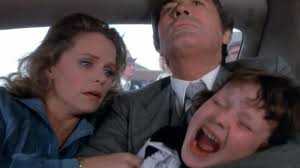 Jennings the reporter is waiting outside and takes pictures of the priest.

Soon Father Brennan shows up again. The Thorns are watching Damien play soccer (surely the devil’s own sport) when the priest approaches the ambassador and says, “Meet me tomorrow for ten minutes. Your wife’s life is at stake.” (Again, Jennings is about, photographing Father Brennan and the Thorns.)

The next day, Thorn meets the priest at Bishop’s Park. Brennen cryptically says, “When the Jews return to Zion when a comet tears the sky, when the Roman Empire rises, then you and I must die.” He implies that this bit of doggerel comes from Scripture -- specifically the Book of Revelation. But even the most exhaustive version of Strong’s Concordance will not help you find this passage in Scripture. It's just not there. He goes on to talk of the Antichrist who will raise armies that will fight until “man is no more.”

Thorn responds that he didn’t come to hear a sermon. He came because he was told his wife was in danger.

Father Brennen again claims that Damien is the Antichrist predicted in the Book of Revelation and goes on to say, “Your wife is pregnant. He will kill it as it slumbers in the womb. He will kill your wife. And when he has established his inheritance, he’ll kill you. He will use your power and position to establish Satan’s rule.” So this adoption was part of Satan's strategy all along.

Thorn is infuriated, and he tells the priest he never wants to see him again. The priest answers, “You’ll see me in hell, Mr. Thorn. There we will serve our sentence.” (The priest's theology doesn't seem to be very grace-based.) 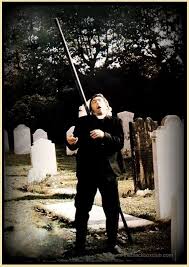 As he leaves, a storm descends on the park. Father Brennen seems to believe he is being pursued. He runs to a church for safety but is impaled by a spire that tumbles from the building's roof.

Jennings tells Thorn about the priest's death. Thorn also learns that his wife is indeed pregnant, and he agrees to go with Jennings to investigate the dead priest's rantings. The two learn from the priest’s diary that the priest wanted to be forgiven for the role he played in Damien's adoption, and they also find that the priest himself had the birthmark "666."

Jennings and Thorn try to research the adoption, but find that a fire destroyed all of the hospital records shortly after Damien’s birth. They track down Father Spilleto, the priest who suggested the adoption, in a monastery. The old priest went mad and apostate years ago but is still cared for by monks.

Jennings and Thorn agree to meet with Carl Bugenhagen (Leo McKern), the archeologist and Antichrist expert Father Brennen had suggested. Bugenhagen insists Thorn will have to kill Damien, giving him sacred daggers to accomplish the task. But first, just to be prudent, they'll check to see if the child has the Mark of the Beast. If so, the child must be killed in a church.

Thorn does find the mark on his child and does take Damien to a church to slay him. Alas, he is not successful, opening the way for sequels in the coming years.

So how do the clergy and the Church in The Omen rank on our Steeple Ratings? Sadly, though we think the work churches do in the real world with adoptions is often a wonderful thing, farming out psychopathic demonic offspring of the Lord of Darkness to unsuspecting parents is not a good thing. Father Spilleto and company get a One Steeple Rating. And giving the Antichrist such a good start in the world brings about an Apocalypse rating of Two Gravestones.

Posted by churchandstates at 9:12 PM