Back to back to school month: Heathers 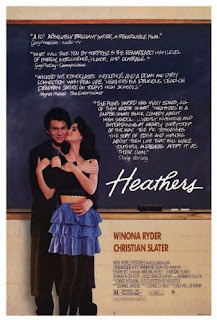 We’ve had some bad Christian Slater films here, with another scheduled for next month (coming attractions -- Apocalypse Month). Heathers, though, is a classic in the high school genre. Drive-in critic Joe Bob Briggs argues it's the best high school comedy, knocking out all the John Hughes contenders. Director Michael Lehmann won the Independent Spirit Award for this film as Best First Feature. Empire Magazine ranked the film #412 in the 500 Greatest Films of All Time.

Heathers is a dark satire about adolescent suicide and murder. Veronica (Winona Ryder) is a part of her Ohio high school’s top clique, the Heathers -- though she's the only girl in the group not named Heather. The Heathers and the young men who follow them dominate the school, forcing other students to bow to their narcissistic whims. Things change when a new kid, J.D. (Slater), comes into the school. He's a rebel who charms Veronica into considering the attractions of homicide.
Admittedly, there isn't a lot of church and clergy in this film, but what is there is choice. 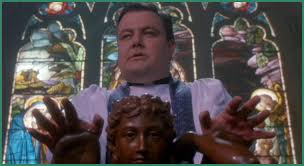 Glenn Shadix (of Beetlejuice fame) plays Father Ripper, the priest who conducts Heather Chandler's funeral after J.D. and Veronica accidentally (?) poisoned her. The couple forged a suicide note for Heather, causing great concern in the school and community that it may be a harbinger of a plague of teen suicides. Father Ripper, dressed in a white robe, collar, and paisley stole, addresses these concerns in his homily at Heather’s funeral:

“I blame not Heather, but rather a society that tells the youth that answers can be found in MTV video games. We must pray that other teenagers of Sherwood, Ohio, would know the name of that righteous dude that can solve their problems. It’s Jesus Christ, and He’s in the Book.”

The packed house in this formal church answers the priest's words with a loud “Amen.”(It was filmed in Pasadena's Church of the Angels, an Anglican church with stone walls and elegant stained glass windows.) 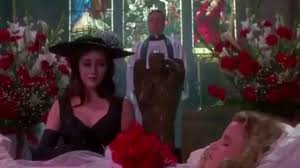 It’s an open casket service and a rather strange quirk in proceedings is to encourage individuals to come forward and pray beside the body. The audience is allowed to hear the silent prayers, including Veronica’s apology for killing her friend. Not all of the attendees treat the setting with respect (one of the remaining Heathers uses holy water to straighten her hair).

More die in the film. J.D. tricks Veronica into helping him kill two of the school's football stars, Kurt and Ram. Again, a fake suicide note is produced, this time making it appear the young men were gay lovers who killed themselves to hide their passion from the world. We don’t get to hear Father Ripper at this funeral, but we do hear Ram’s father stand by his son’s open casket (both boys lie in state, wearing their football helmets). The priest watches as the father looks at his dead son and loudly proclaims, “I don’t care that you were a pansy. You made me proud. I love my dead son.” (J.D. ponders a little too loudly at the service whether he would still love his gay son if he “had a pulse.”)

We do see one more funeral at the church, though it is actually part of a dream of Veronica’s. Now Father Ripper is dressed in a flowery, hippy robe with a plethora of beads. Everyone in the pews is wearing white robes and 3-D glasses.

Though the sermon is just a figment of Veronica’s imagination, the words she puts into Father Ripper’s mouth are interesting and strange, “‘Eskimo.’ Heather underlined a lot of things in this copy of Moby Dick, but I believe ‘Eskimo’ is the key to understanding Heather’s pain. On the surface, Heather was the vivacious young lady we all knew her to be. But her soul was in Antarctica, freezing with the knowledge of how her fellow teenagers can be cruel, the way that parents can be unresponsive. And as she writes so eloquently in her suicide note, ‘the way life can suck.’ We’ll all miss Sherwood’s little Eskimo. Let’s just hope she’s rubbing noses with Jesus.”

In this same dream, the first dead Heather appears to Veronica and tells her she is SO bored of Heaven, “If we sing Kumbaya one more time…” 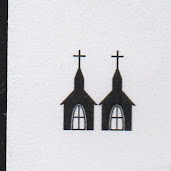 From Veronica’s dreams and attitudes, it seems she doesn’t believe that Father Ripper understands or cares about young people more than any other adults. Just as teachers are only concerned about their jobs and parents are concerned about themselves, the priest is just concerned about selling Jesus. But Father Ripper doesn’t kill others or himself -- which isn’t nothing in this film, so he avoids our lowest rating. We give Father Ripper and his church a Movie Churches rating of Two Steeples.
(Heathers is rated 'R' and currently available on Amazon Prime. If you've already seen the film, the best way to watch it again is on Joe Bob Brigg's Last Drive-In Theater supplemented by excellent commentary.)

Posted by churchandstates at 9:10 PM