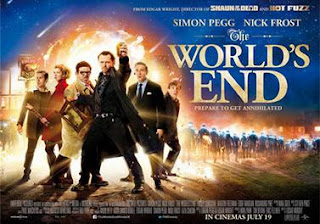 The obvious question for October 2020 is, "Is it redundant to watch an apocalypse on a screen when we can just look out the window?" But, of course, this year has only three or four varieties of the apocalypse while film history offers so much more.

Films have apocalypse by disease, reminiscent of our Covid-19, but Outbreak and Contagion are even grimmer. We have rioting in the streets, but nothing yet that can be compared to the Mad Max saga. And, of course, there is the apocalypse that comes as society and politics become stupid, as represented in Idiocracy which….Well, that one’s pretty much spot on.

But films present many other kinds of apocalypses that we haven't experienced. During the last century, the most common means of ending the world in cinema was nuclear war in grim films like On the Beach and comedies such as Dr. Strangelove. One of the most popular genres in this century is stories about zombies, from the epic canvass of World War Z to comedies like Zombieland. Climate change is often the cause of the end of all things in films, with cheesy selections such as Waterworld, The Day After Tomorrow, and Geostorm. In many apocalypse films, animals have not been our friends, as in The Birds and Frogs.

The threat often comes from above. In 1998 meteors threatened the world twice, in Deep Impact and Armageddon, but it had happened before in films such as When Worlds Collide. Aliens also came from the skies to threaten our world in a host of films such as Independence Day and Mars Attacks! and several versions of War of the Worlds. 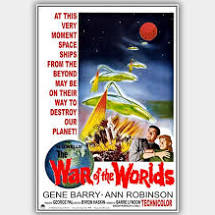 It's a good thing that there are exceptions; some apocalypse films don't dodge faith and provide us with church and clergy (the mainstays of this blog). Biblical Apocalypse films, a subgenre of apocalypse films,  portray the End Times as presented in Scripture (with wide degrees of fidelity to the Biblical text). By their nature, these films tend to make clergy and churches are a central feature. (Though not always, of course. 2010’s Legion is a strange film in which God decides to destroy humankind with angel attacks. Angels that swear and bite. Weird film, but no clergy and no churches, just a diner, so we won’t bother with it here.)

So we will be looking at Apocalypse films of the "Biblical" variety all month. I'm hoping these films will provide a pleasant diversion from pandemics, social unrest, and presidential elections. (Of course, there's another reason to discuss this topic in October. These films could all be classified as horror, and Halloween is coming.)
Posted by churchandstates at 5:59 AM

Email ThisBlogThis!Share to TwitterShare to FacebookShare to Pinterest
Labels: apocalypse