Back to Back to School Month: The Mighty Macs 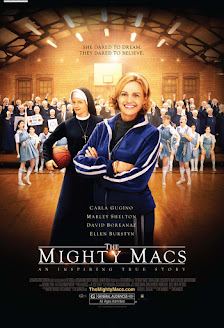 This film makes an ideal transition from Nun Month to Back to School Month (though it would also work as a changeover to Sports Month). The Mighty Macs tells the true story of Cathy Rush (Carla Gugino), a first-time college basketball coach who led the women’s team of a small, Catholic college to a national championship (actually three national championships.)

Like any film based on true events, some liberties were taken with the facts, but some of the more incredible details of the movie were true. Rush was only 22 years old when she began coaching, barely older than her students (though Gugino was 38 when she played the role). She was married to Ed Rush (David Boreanaz), an NBA referee (the film leaves out that she was already the mother of two young children who she would sometimes bring to practices).
The school was sadly lacking in supplies. Rush began coaching at the school with only one basketball and no gym (it had recently burned down; all games the first season were away games). The school couldn’t afford new uniforms, so they were forced to go with a “retro” look.

But we, of course, are not here to write about basketball but about the clergy in the film, which in this case is nuns. And to start with, this is a pretty good group of nuns.

Immaculata University in rural Pennsylvania was founded in 1920 by nuns of the order of the Servants of the Immaculate Heart of Mary and run by nuns. When the film opens, in November of 1971, the school is financial straits. Rush goes in for a job interview with the school’s head who is also the convent's Mother Superior (Ellen Burstyn).

In the film, one of the first questions the Reverend Mother asks Rush is “Which Catherine are you named after?”
Rush dodges the question but does nothing to dissuade the Reverend Mother from thinking she was from a Catholic background (which was not the case). The Mother Superior makes it clear her main objective for the basketball program is to suppress the girls’ hormones. She is rather alarmed by the thought that Rush’s coaching policy is to turn the girls into real athletes but offers Rush $450 a year to coach the team. Rush accepts (this was indeed her salary).
The coach tells her, “Mrs. Rush, I hope you are a better coach than negotiator. I would have paid you $500.”

Rush laughs, "I would have done it for nothing."
The sisters, students, and staff attend mass together, though we do see Coach Rush arriving late (she does cross herself upon entry). She passes a note to a student during the service, urging her to join the basketball team. The coach seems to take every opportunity to recruit. 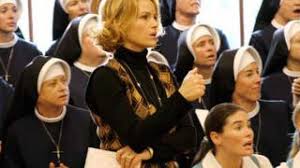 Rush also works to raise funds for her team (really, to obtain any funds at all for her team) from the school's administration, but the Reverend Mother responds, “We’re also requesting once again for the heating system in the freshman dorm be replaced.” As Rush continues to pester her for money, she eventually shows the coach the meager resources used to care for ailing and elderly retired nuns on the grounds and her own quite humble living quarters. She tells Rush, “This is my room, you can help yourself to anything I have.”
Rush begins to seek outside sources, appealing to the townspeople and alumni.

Rush gets assistance from a Sister Sunday (Marley Shelton), a young nun who serves as her assistant coach. The young nun had been praying for God’s guidance about continuing in her calling and taking her final vows. We see her in the church praying, “I implore You to send me a sign. I am listening for Your voice.” Just then, she hears a basketball whistle downstairs. She goes downstairs to see the team working out in the cramped recreation center and is recruited. She enjoys working with the practices and Rush appreciates having another driver to get the team to games.

Sister Sunday and Rush invite local boys to scrimmage against the girls. (We actually see Sister Sunday slap one of the boy’s butts during one of these practices!) When the Reverend Mother learns of this, she reprimands them -- no males were allowed on campus at that time. Rush also gets into hot water when they run some unorthodox drills. When it's found out, Sister Sunday takes the responsibility and the hit, but the Reverend Mother threatens this will be Rush’s last season.

Rush and Sunday and their team do quite well. They are eventually invited to the National Tournament, but they have no money for transportation to the tournament. But the girls on the team sell soaps and “soothing creams” that were donated to the school, going door to door in the community. They also sell buttons reading “We Will Be #1.”

The Mother Superior is eventually won over to their cause. She gives them the money she saved from her poker winnings. (Poker night had, in more prosperous times, been one of the more unusual recreations for the sisters at the school.) There's enough to buy bus passes for the team, but not the coaches.

They discover another way to cut costs. At that time, airlines allowed clergy to fly free. Sister Sunday wears her habit -- and Coach Rush dons one too. As they wait for their flight, Rush confesses another “sin” to Sister Sunday. She isn’t really a Catholic, she’s a Baptist. Much is forgiven by those who win games. Even that.

The other nuns at the school also support the team, dipping into their personal funds to support the team by attending the championship games. A banner can be spotted in the stand at one of the Macs' games, reading “Mark 9:23.” (“Everything is possible for one who believes.”) 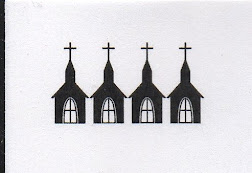 Rush and the Macs did win that championship -- and two after that. But that isn’t our concern here. What is important to us here at Movie Churches is that the Sisters of Immaculata University guide their students with love and care and present an example of simple, godly living, earning our highest Movie Church rating of Four Steeples.
(This film is rated 'G' which is pretty rare these days.)

Posted by churchandstates at 4:11 AM