Back to Back to School Month: The Devil's Playground 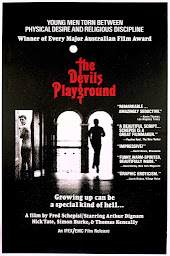 The Devil’s Playground (1976)
There are quite a lot of films called The Devil’s Playground, but few of them would work for the purposes of this blog about churches and clergy. The 1932 documentary on fishing around the world certainly wouldn’t help. Neither would the 1937 romance with Richard Dix as a submarine officer and Delores del Rio as a dance hall girl. I love Hopalong Cassidy as much as the next guy, but his 1946 adventure pits him against a corrupt sheriff, not a corrupt clergyman. The 2002 film about Amish youth on Rumspringa comes closer, but it’s a documentary and we generally do feature films here. I’m also not going to bother with the 2010 feature about a mercenary seeking a cure in a zombie apocalypse or the 2018 short about military veterans who become cartel hitmen.

No, the best The Devil’s Playground for our purposes was made in 1976 by writer/director Fred Schepisi. Schepisi was a part of the Australian film renaissance of the 1970s and 1980s that included directors such as Peter Weir (Picnic at Hanging Rock), Gillian Armstrong (My Brilliant Career), George Miller (Mad Max), and Bruce Beresford (Breaker Morant). Schepisi first received international attention with his film about Aborigines, The Chant of Jimmie Blacksmith.

Schepisi based the script of The Devil’s Playground on his own experiences as a student in an all-boys Catholic school in the 1950’s. The film opens in the beginning of a school year in 1953. Tom Allen (Simon Burke) is a thirteen-year-old student at a De La Salle Brothers seminary for young men in Melbourne.

In much of the film, the priests deal with the “coming of age” of the boys (chiefly issues of sexuality). The sexual abuse of young people by priests has been an important story for some time now, but this film made in the 1970’s doesn’t portray any physical abuse of the children (but emotional and psychological abuse perhaps).

Let's look at the individual priests of the Brotherhood at the school. They certainly vary in temperament and suitability for caring for young students.

Brother Francine (Arthur Dignam) most probably should never be allowed within hearing distance of adolescents. We first meet him as he is watching boys shower. Most of the boys are wearing bathing suits, but one is naked. He says, “That’s disgusting. The body is the enemy of the soul. The rest of you boys, avert your eyes. The eyes are the window to the soul. Guard against your senses at all times. Preparing to be a brother requires… self-denial, self-discipline to be one of God’s chosen few.” (As a priest in the Roman Catholic Church, Brother Francine should know that calling the body evil in this way is Gnostic heresy. God made our bodies and our bodies are not “enemies.”)

Brother Francine is the character who drops the title line, saying, “Undisciplined minds are the devil’s playground,” but as the film goes on, we learn that his mind is not disciplined. We see him take the boys to a public swimming pool and Francine peeps at women and girls in the changing room (I do hope most public restrooms in Australia were built better. In the film it is scary-easy to look into the changing rooms from the outside). As Francine rests in his bed, we see some of his lurid fantasies of swimming with naked women.

Eventually, we see Francine break down utterly in front of his fellow priests. He's sent off to a psychiatric facility after this outburst, “I hate life. It’s evil, sick, despicable. The body dominates the mind. It always wins. What else are you thinking, Frank? Your mind is a cesspool of desire. The only answer is to give in, or lose your mind. I have a damn good body, but no one has looked at it for years, let alone touched it. It’s done nothing. But the mind, it has. It’s sinned. Oh, how it’s sinned. Twisted, cowardly, perverted sins. I hate life. I hate it.” This is a man who should not have been allowed around young men.

The school brings Father Marshall (played by novelist Thomas Keneally) to speak at a special retreat for the boys that focuses on sexual purity and preparing for a future in ministry. He has a much more positive view of life than Francine, “Don’t give into falderal and fanatics, be yourself. Keep your smile seen around the world.” He concludes the conference with these words, “I’m sure you all have a future in the religious life. This retreat should have helped you grow in confidence for your future vocation. I have no more to say. I’ve enjoyed being with you. I’d give my right arm to stay with you longer. By the way boys, if you ever become a missionary, don’t use that phrase with a cannibal.” He then blesses the desserts the boys are about to enjoy after a two day fast. 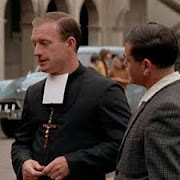 We see Brothers Jim (Peter Cox) and Frank in civilian clothes when they go to a soccer game in the city. After the game, the men stop at a bar where they drink freely. Frank begins to flirt with a woman in the bar, and when he is asked what he does for a living he responds, “I’m a school teacher.” Jim is shocked by Frank and stumbles drunkenly out of the bar and Frank must follow him. (At the end of the film -- spoiler! -- when young Tom flees from the school, Jim and Frank give him a ride to the boy’s home in the city.)

Brothers Frank and Jim seem like nice guys who encourage the students. Brother Arnold (Jonathan Hardy) who leads the boys in singalongs and soccer games. Brother Victor (Nick Tate) is assigned for sharing the facts of life with the students and seems to do so in a comfortable and practical way.

So the priests are a mixed bag. A worrisome thing is that the school doesn’t quash a secret society of students whose sadomasochistic practices lead to the death of a student. 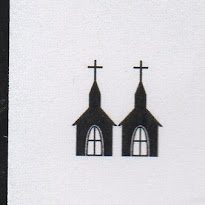 So what's the steeple rating for the seminary and clergy in The Devil’s Playground? Two Steeples, which isn't our lowest rating, but it isn’t great.

Posted by churchandstates at 8:50 PM