The Last of the Horror Sequels 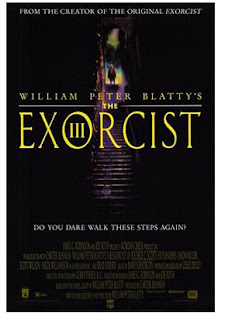 The Exorcist III (1990)
Sturgeon’s Law says that 90% of everything is crap. (I hesitated about using that word. This is a family site. But if that word is too much, you probably shouldn’t be reading about The Exorcist III.) Anyway, that percentage for horror films would probably be 95% -- and maybe 98% for horror movie sequels. The other horror sequels this month have done nothing to buck this trend. This week’s film does.

The original Exorcist was a box office sensation, a critical favorite, a cultural icon, and widely considered one of the best horror films ever made. The Exorcist II: The Heretic… Was #2 in Michael Medved’s book, The 50 Worst Films of All Time. 1990’s The Exorcist III (written and directed by William Peter Blatty, who also wrote the novel, The Exorcist) falls somewhere in between. The film is based on another novel of Blatty’s, Legion (a title referring the story of the demon possessed man found in Mark 5).

The film is set in Georgetown, 17 years after the events of the original story (the events of the second film are ignored). Central to the film is the friendship between a cop and a priest. George C. Scott plays Lt. William Kinderman, a homicide detective investigating bizarre serial murders. Ed Flanders plays Father Dyer, a priest who was friends with Father Damien (one of the priests from the original story).

Kinderman and Dyer go to the movies together, to see It’s a Wonderful Life. Dyer admits he’s seen the movie 37 times. When the two talk in a diner later, the policeman admits he doesn’t view life as such a wonderful thing. He is investigating the murder of a twelve year old boy who was decapitated, with his head replaced by a marble head of Jesus stolen from a statue in Dyer’s church. It’s another horrible event of many Kinderman has viewed in his work.

“The whole world is a homicide victim, Father. What kind of God would invent death?” Kinderman says. “In the meantime, we have cancer and mongoloid babies and murders, monsters prowling the planet, even prowling this neighborhood, Father, right now, while our children suffer… and our loved ones die, and your God goes waltzing blithely through the universe like some kind of cosmic Billie Burke.” 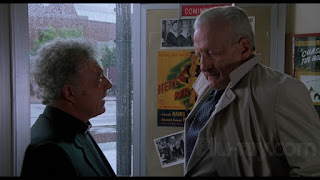 Father Dyer responds, “It all works out right.”


“At the end of time,” the priest responds.

“Oh, I’d like to believe that,” the cop tells the priest.

And, through a series of horrible events, the cop does come to believe. In a strange way, seeing great evil leads him to see the reality of God and His goodness, primarily through the self-sacrifice of Father Dyer and other men of God.

Father Dyer is not without his flaws. He smokes and loves his candy (“I spent a year taking children's confessions and I became a lemon drop junkie.”) While in the hospital, he reads trashy gossip magazines (he tries to justify this by telling Kinderman he ran out of newspapers). In fairness, we do see him reading Scripture as well.

And the priest isn’t always careful in his language. One of his superiors reprimands him for his treatment of one of their biggest donors. “What did you say to him?” he asks Dyer.

The priest responds, “Jesus loves you. Everyone else thinks you’re an a**h***.”

Father Dyer is a kind, funny, warm, compassionate man, who gives hope to the despairing policeman.

Kinderman also sees an example of courage in Father Morning (Nicol Williamson). As demonic killings continue in the film, including the murder of priests, the Father Morning sets out to perform an exorcism in the most dangerous of conditions.

Yes, this is a horror film with many grim and bloody deaths (though perhaps not as salacious and scandalous as the first film), but it is a film that genuinely wrestles with the problem of evil. The priests in this film, who present worthy arguments for theodicy (seeing God’s light in a dark world), earn our highest Movie Church rating of four steeples.
Posted by churchandstates at 7:35 AM