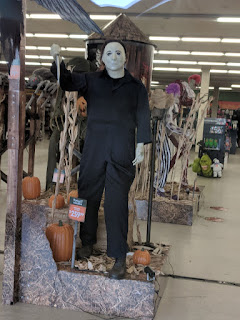 As a rule, sequels are terrible. With a few exceptions (The Godfather II, The Empire Strikes Back, and the New Testament come to mind), the sequel rarely lives up to the originality and richness of a beloved film or novel. I’d be content in living in a world without Casablanca II: The Adventures of Rick and Louie or The Princess Bride II: The Challenges of Living Happily Ever After. For some reason, horror films -- many of them not very good to begin with -- have more sequels than any other genre.

For instance, the original 1978 Halloween (a very well made film, albeit without church and clergy) has a sequel debuting this month titled, oh so originally, Halloween. There have already been nine sequels, all pretty bad retellings of the boogeyman Michael Myers. (Well, except Halloween III: Season of the Witch, which is about a mad doctor who uses Celtic magic to make deadly Halloween masks. So that was different.)


Fortunately, here at Movie Churches, we don’t care much about the quality of a film, just about whether the film features churches and/or clergy. We’d rather watch good films, but sadly, in preparation for this series, I researched and viewed films that were not only bad, but also didn’t have any interesting content about churches or clergy (looking at you, Damien: Omen II). I’d rather be able to say, “This film has an interesting take on baptism, AND it’s great fun to watch,” but don’t expect much in the way of MUST SEE films this month as we look at Horror Movie Sequels at movie churches. (Okay, one of the films isn’t bad, but most of them...)

Don’t worry, though. They all have interesting perspectives on matters ecclesiastical while they’re trying to scare us.
Posted by churchandstates at 7:50 PM