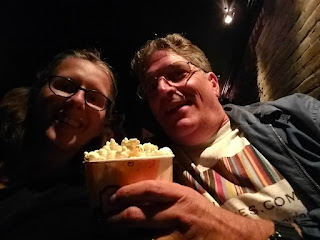 My Favorites and Movie Churches Favorites
A couple of weeks ago I wrote about the worst films I watched for this blog. There were some hard sits, but I can usually enjoy even a bad film -- especially if it’s in a movie theater with reclining seats and real butter on the popcorn. That’s my happy place. Home with popcorn is okay too.

Sometimes I was able to watch films I already loved, which makes the experience even better. There were even times I could watch my favorite films (not all my favorite films, of course, because not all of my favorite films have clergy or churches).
I thought it might be fun to list my favorite films in different genres (whether they were blogged or not) and to list the best films in those genres that I did write about. On a few occasions, they were the same.

Science Fiction
Blade Runner, 1982 (favorite but not blogged)
This story of a policeman of the future hunting down fugitive androids poses interesting questions about what it is to be human. The encounters between artificial humans and their creators provide an odd reflection of real people’s encounters with their God. An amazing vision of the future (2019!) with dazzling special effects.

The War of the Worlds, 1953 (featured in the blog)
There have been quite a number of adaptations of H.G. Wells’ novel about an alien invasion of earth. A clergyman in the film boldly tries to engage the alien invaders -- with unfortunate results. A church in the film provides a place of comfort. Other excellent science fiction films have been featured in the blog (Serenity, Contact), but this is a classic.

Musical
Singin’ In the Rain, 1952 (favorite but not blogged)
No clergy or churches in this film, so it’s not featured in the blog. I don’t even think God is mentioned, but the songs and dancing and comedy and romance in this film are divine. 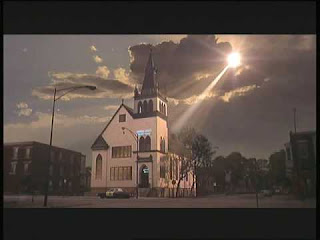 The Blues Brothers, 1980 (featured in the blog)
Jake and Elwood were on a mission from God. They were raised and cared for by rather surely nuns, but they were cared for. And we are allowed to observe a joyous pentecostal service, led by the Rev. Cleophus (James Brown). When I first saw this film, I thought, “What a stupid film. All it had was car crashes and blues music.” Then I saw it again and thought, “Hmmm. Nothing but blues music and car crashes.” The third time I saw it, “That was awesome! Nothing but car crashes and blues music!”

(This image above, from The Blues Brothers, may look
familiar to readers of the blog.)

War Film
The Great Escape, 1963 (favorite but not blogged)
Steve McQueen, James Gardner, Charles Bronson, James Coburn, and more -- a great collection of movie stars. Action, laughter, tension, and heroic sacrifice combine for what is sometimes my favorite film (when it’s not Lawrence of Arabia or It’s a Wonderful Life or Singin’ in the Rain). But it has no churches or clergy.

Patton, 1970 (featured in the blog)
This Best Picture winner and Oscar-winning (but award not accepted) performance by George C. Scott as the legendary General has a chaplain. The scene where Patton asks him to write a “weather prayer” is great.

Western
Unforgiven, 1992 (favorite, not blogged)
Clint Eastwood made a lot of great Westerns, but this is his best --even better than any Howard Hawks or John Ford Westerns. It has much to say about what people deserve and don’t deserve. I think we see a church in the distance in the film, but don’t hear anything about it. And no clergy. 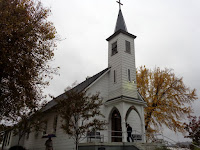 High Noon, 1952 (featured in the blog)
For whatever reason, most of the Westerns featured in this blog haven’t been very good, but this is an exception. In lists of all-time best Westerns (and films), this Gary Cooper classic is generally included. It also features a crucial scene in a church, a church location I had the opportunity to visit.

Mystery
And Then There Were None, 1945 (favorite, not blogged)
This great adaptation of an Agatha Christie classic sadly features no church or clergy. (We did get to write about another Christie: two versions of Murder on the Orient Express.)

The Detective, 1954 (featured in the blog)
In my opinion, G.K. Chesterton was an even better writer than Christie. He wrote a series about a crime-solving priest, Father Brown, played by Alec Guinness.

Romance
When Harry Met Sally, 1989 (favorite, not blogged)
Yeah, some of the humor is raunchy and attitudes may be outmoded, but this film makes me laugh, and also makes me weepy on the final New Year’s Eve of the film.

The Sound of Music, 1965 (featured in the blog)
Yes, I could have listed this with the musicals, but I like Blues Brothers better. This is also a wonderful romance of a nanny who first falls in love with the children in her care and then their father.

Adventure
Raiders of the Lost Ark, 1981 (favorite, not blogged)
God and His angel of death make a big appearance in the film, but there are no churches or clergy. Indy does mention Sunday School.

The Adventures of Robin Hood, 1938 (featured in the blog)
This is the best film of the Robin Hood legend; all retellings feature a friar named Tuck.

Thriller
North by Northwest, 1959 (favorite, not blogged)
Alfred Hitchcock is one of my favorite filmmakers, but I could only write about one: I Confess, which is far from his best. This film about a cross-country chase is wonderful, but Cary Grant never stops at a church.

Sorcerer, 1977 (featured in the blog)
It's an understatement to call this film downbeat. It's about some down-on-their-luck men transporting nitroglycerin. The church featured in the film is very corrupt, and the movie is tense as all get out.

Dramatic
It’s a Wonderful Life, 1947 (favorite, not blogged)
As mentioned before, this is a contender for my all-time favorite film. And it is a clear winner during advent. It even has some churches featured, but not enough to write about for the blog.

On the Waterfront, 1954 (featured in the blog)
This best picture winner and classic has one of the best depictions of a fighting (not so) young priest (played by Karl Malden). 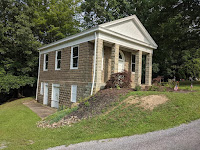 Horror
Night of the Living Dead, 1968 (featured in blog and favorite)
We finally get to the last three films. They're not just my favorites from the blog, but also my favorites in their genre.

I had to quit watching this film on TV when I was at home, all alone, when I was in junior high. I eventually got around to watching the whole thing and loved it. We were able to visit the chapel h in the cemetery featured at the beginning of this film.

Comedy
Airplane, 1980 (featured in blog and favorite)
The nuns on the plane allowed me to write about this film for the blog. I’ve watched it many times, and still laugh many times whenever I watch it. (Another contender for this slot, Monty Python and the Holy Grail, was also featured in the blog.)

Crime
The Godfather, 1972 (featured in blog and favorite)
A number of critics call this film about the troubles of a crime family the best film ever made. It is very, very good, but the Roman Catholic Church in this series is quite corrupt (just like most other societal institutions). It’s almost as if there were sinful humans in the Church.

I chose each of these films because I like them a lot and had fun watching them again. Next week will feature other films that I enjoy and also find to be among the most spiritually uplifting.
Posted by churchandstates at 9:46 PM