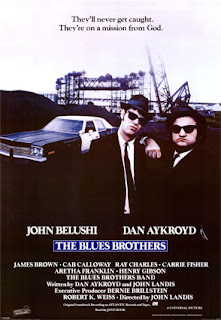 But the film does have something besides blues music and car crashes. It has churches, which is why I'm writing about it here. As always, we're here to review the churches in the movie rather than the movie itself.

We first see a ministry of the Catholic Church, rather than a church proper: an orphanage.
The Saint Helen of the Blessed Shroud Orphanage was where Jake and Elwood Blues, the Blues Brothers, were raised. When Jake is released from Joliet Prison, Elwood picks him up and takes him there. Jake objects, but Elwood tells him, "You promised to visit the Penguin you got out. You can't lie to a nun." (The Penguin is their nickname for the nun who runs the orphanage, the Sister Mary Stigmata.)

The stairs to the Sister's office are dominated by a rather terrifying crucifix. Sister Mary Stigmata welcomes the Brothers home and soon informs them that the orphanage came up $5000 short in their tax assessment. The Archbishop wants to sell the orphanage to the Board of Education and send the Sister to the mission field.

Jake offers to get the money for her, but the Sister rightly assumes he plans to steal it and hits him with a ruler. Which causes Jake to swear. So she hits him again. Which causes Elwood to swear, so she hits him. Much swearing and hitting ensues. The brothers flee and the Sister yells after them, "Such a disappointing pair, I prayed so hard for you. The two young men I raised to obey the Ten Commandments come back as two thieves with filthy mouths and bad attitudes. Get out and don't come back, until you've redeemed yourselves."

So what do I think of the Church as represented by the Good Sister? She does live up (down?) to the common cliché of nuns as ruthless disciplinarians. She doesn't seem to be living life with a WWJD bracelet. On the other hand, she is one of only two people who cared for the young Blues Brothers, which should count for something.

The other person who cared for them was the orphanage maintenance man, Curtis (played by Cab Calloway).  When the Brothers meet with him, he reprimands them for swearing at the Penguin. He then tells Jake he should, "Get wise. You get to church."

Jake responds, "I don't want to listen to no jive-a** preacher talk to me about heaven and hell."
But soon Jake and Elwood are on their way to the Triple Rock Baptist Church pastored by the Reverend Cleophus (the Godfather of Soul, James Brown.) Elwood tells Jake, "We've got to make that move toward redemption. We've got to go to church."

Jake and Elwood appear to be the only two white people there when they enter the Triple Rock. A neon cross decorates the wall with the motto, "There is Power in the Cross." There is also stained glass and a river painted in the front of the church (the River Jordan, perhaps). The Reverend is indeed preaching about eternal destiny, mourning lost souls and warning that "the day of the Lord cometh as a thief in the night."

Then the music kicks in; loud, raucous Gospel music, exhorting the congregation to "Preach the Word! All the way! Feel it! Know it! Raise your voices!" All are singing exuberantly and many are dancing with abandon.

Elwood looks at Jake who looks shaken, asking, "Jake, are you all right?"

Jake is more than all right. He sees a light from heaven and suddenly seems full of joy. He cartwheels down the aisle and the Reverend asks if he's seen the light. Jake has.

Jake tells Elwood that God has shown them how they can earn the money for the orphanage legally. They can put together the old band. Elwood joins him in praise, proclaiming, "God bless the United States of America!" Both dance.

The Brothers leave the church changed. As Elwood says many times, "We're on a mission from God." Jake puts it another way, "Well, me and the Lord, we have an understanding."

So my evaluation of these churches? The ministry of the Catholic Church doesn't come across as fun exactly, but they do step in to help some kids that no one else cared for. As for the Triple Rock Baptist Church? It's pretty awesome. 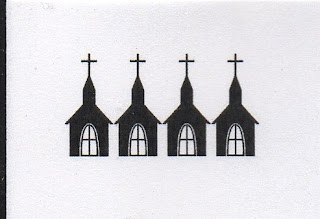 Posted by churchandstates at 7:43 AM