Films We Never Got to Review

MINOR REGRETS AT THE END OF A BLOG
When this blog was just beginning, my friend, Tim Stafford, told me he didn't think the blog go last very long. "After all," he asked, "how many movies are there about churches and pastors?"

It's seven years later, and we've looked at a different film every week. There were a few weeks we ran a repeat, but there were quite a few weeks when we discussed more than one movie. That means we’ve looked at more than 350 films, and we still haven’t run out of films to review. I have a list with nearly 300 potential films, and assuming churches keep showing up in new movies -- I think I already have enough to write about for another seven years. But I'm tired and ready to move on to other projects.

12) Fiddler on the Roof (1971)
I've seen this film more than once, and I like it very much. We've looked at musicals (Sound of Music, Cabin in the Sky, Sister Act) but Fiddler would have been the first musical featuring Eastern Orthodox clergy. There haven’t been many films featuring Orthodox clergy -- the only one I can think of is the Mel Brooks comedy, The Twelve Chairs. I could also have written about Andrei Rublev, a painter of icons used for Orthodox worship, or Beyond the Hills about a Romanian Orthodox Covent, but really, I just wish I'd taken the opportunity to drag the priests in Fiddler over the coals for the way they treated Tevye. 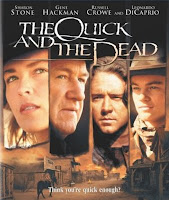 11) The Quick and the Dead (1995)
I really enjoyed this Sam Rami western, and I would have liked to write about Russell Crowe’s haunted pastor with a history as a desperado. I would have been happy to have an excuse to watch this again. Most of the westerns I’ve written about haven’t been good westerns (we did get to watch the classic High Noon, but most have been along the lines of The Deadly Companions and God’s Gun). It might have also been fun to get to Charleton Heston’s Will Penny in which Donald Pleasence plays a very creepy, evil preacher. 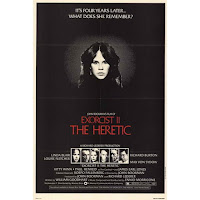 10) The Exorcist 2: The Heretic (1977)
It really is a shame I couldn't write about this film, since we reviewed the clergy in the original Exorcist. I have read about this film for a long time, starting with Michael Medved’s Golden Turkey Awards (a salute to bad films), but I’ve never seen it. It really is a shame I couldn’t get to Exorcist 2, since we did review the original Exorcist as well as the second sequel. The Heretic stars Richard Burton in a performance legendary for hamminess. Instead, I've settled for the hammy Burton performances in The Sandpiper and The Robe.(FWIW, another bad film I didn’t write about was God’s Not Dead Part IV: We the People. I watched it in the theater, but never got around to writing about it, though we featured the first three God's Not Dead movies.)

9) Lady Godiva of Coventry (1955) - Please don’t assume it is prurient interests that drew me to curiosity about this film (which I’ve never seen). In all the pictures of Maureen O’Hara as the historical streaker, she seems to be surrounded by nuns. All right. I am curious how the filmmakers handled the nudity in studio days with the Hays Code in full effect. (The Song of Bernadette is another faith-centered story from the golden age of Hollywood. It was quite acclaimed. I’ve never seen it, but it looks rather stodgy, and that's kept me from watching it.)

8) The Devils (1971)
In the blog, we've tried not to shy away from films that are critical of churches and clergy or even the Christian faith. As a result, we’ve looked at films by famous critics of religion like Michael Tolkin and Luis Buñuel. This notorious “historical” work by writer/director Ken Russell (from a story by Aldous Huxley) is one I never got around to watching. It's difficult to find an unedited version of this X-rated film in which Oliver Reed played a priest with unorthodox views on faith and sex whose followers included licentious nuns. But it was not to be.

7) Ganja & Hess (1973)
Arguably, this blog didn't cover enough vampire blaxsploitation films, and this movie would have helped remedy that oversight. Sadly, this film was also difficult to find in its original form. (Fun fact: Duane Jones's only other starring performance is in Night of the Living Dead.) The Church seems to play an important part in the battle against dark forces, so I do need to get around to watching this sometime even if I don’t have anywhere to write about it.

6) The Miracle Woman (1931)
This is yet another tough film to track down, with one of my favorite directors (Frank Capra), and starring one of my favorite actresses (Barbara Stanwyck). I'm baffled to realize that we haven’t featured any films by Capra or Stanwyck. Though I haven't seen this film, in it, Barbara becomes disillusioned with the Church and takes up a career as a fraudulent evangelist. Pre-Hays Code films like this one had much more freedom to be critical of the Church. I will manage to write about this one someday, even without this blog as a vehicle. 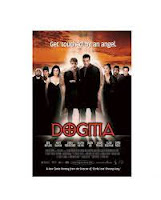 5) Dogma (1999)
I have seen this Kevin Smith satire of the Roman Catholic Church and angels and demons that was condemned by the Church even before it was released. While I have grave reservations about the theology in the film, at times it's quite funny and would have been interesting to write about.

4) Au Hasard Balthazar (1966)
Robert Bresson was one of France’s greatest directors, and I was able to review his classic, Diary of a Country Priest. This film contains just a little about church and clergy. Others of his work, such as Angels of Sin (about a convent that rehabilitates convicts) or The Trial of Joan of Arc. Au Hasard Balthazar is Bresson’s only film (and perhaps the only film of any kind) that features the baptism of a donkey.

3) Les Miserables (1935, 1952, 1998, 2012, or any of the other versions)
There are many adaptations of this Victor Hugo film, but I didn’t get to any of them. This is too bad, because Bishop Myriel, who cares for Jean Valjean, is one of the best portrayals of clergy in literature and cinema.

2) The Name of the Rose (1986)
I’ve read Umberto Eco’s novel, but I’ve never seen this adaptation of the book, and it’s hard to track down. It’s a retelling of a Sherlock Holmes story using Franciscan monks in a medieval abbey. It stars Sean Connery as a friar, William of Baskerville. It also stars Christian Slater and we at Movie Churches do love Christian Slater films (the good and the awful.)

1) Amazing Grace (2006)
I saw this film and like it very much. Directed by Michael Apted, it tells the true story of William Wilberforce and his campaign against England's slave trade. Wilberforce's pastor was John Newton, the former slave trader and author of the hymn “Amazing Grace.” He definitely would have received our highest Movie Churches rating of Four Steeples.
If only I could have gotten to these dozen films. And maybe, St. Benny the Dip. And…
Posted by churchandstates at 5:55 AM