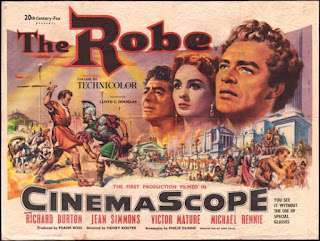 The Robe (1953)
As we've mentioned a number of times before, we don’t do many Biblical films here at Movie Churches because films such as the 1956 Ten Commandments or any of the versions of Ben Hur don’t have much in the way of church or clergy. (The 1923 version of The Ten Commandments is another story.) Occasionally, though, Sword and Sandal epics set in early AD have one or both of them. One such film is The Robe.

Based on the Reverend Lloyd Douglas’s best-selling novel of the same name, The Robe tells the story of a Roman military tribune, Marcellus (Richard Burton), who participates in the crucifixion of Jesus Christ and goes on to become His follower in the early church. Jesus had worn the article of clothing of the title, but Marcellus won it in a game of chance in the shadow of the Cross. The robe plays a role in the tribune’s journey of faith, as does his Christian slave, Demetrius (Victor Mature), and his childhood sweetheart, Diana (Jean Simmons).

The Rev. Douglas seems to have written the novel as a means of sharing his Lutheran faith.
Producer Frank Ross saw the property's moneymaking potential before the book was published and bought the rights to the novel. He spent a decade bringing it to the screen, and it made him a very wealthy man.
Screenwriter Albert Maltz saw in the story an opportunity to present his Marxist vision of revolt. Maltz was one of the famed Hollywood Ten who refused to give names to the House Un-American Activities Committee (his name was removed from the credits and not returned for decades).
It was directed by Henry Koster, a Jew who fled Germany in 1932, who stressed the story’s theme of tolerance.

But when (and if) the film is remembered these days among cineasts, it is chiefly noted for being the first feature film presented in Cinemascope. In the early 1950s, movie studios were in an existential financial struggle with the upstart television industry. Instead of boxy images, Cinemascope's widescreen provided a new vision for storytelling. In an introduction to the DVD version of the film we watched, Martin Scorsese marvels about the movie screen opening wider and wider on his first viewing of the film.

Of course, what we care about here is the presentation of the church and its leadership. Both come out quite positively in the film. 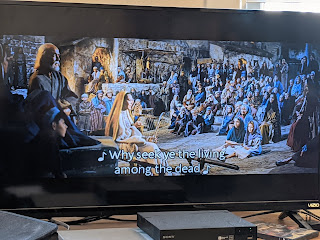 After Demetrius escapes, Marcellus searches for him in the small town of Cana (yes, the place where Jesus turned water into wine at a wedding). He encounters a weaver named Justus (Dean Jagger), a leader of the local church. Justus encourages all the believers to treat the stranger from Rome with generous hospitality. Marcellus attends a worship service that seems to consist entirely of one song about the death and resurrection of Jesus sung by Miriam, a paralytic woman who knew Jesus while He was on earth.
Marcellus asks the woman why Jesus didn’t heal her and she responds that Jesus healed her spirit, giving her love, joy, and hope in place of bitterness and anger. (Though I certainly believe that God allows people to live with illness, such as Paul’s “thorn in the flesh”, I know of no instance in the Gospels where Jesus didn’t perform physical healing when there was an opportunity to do so.)

Marcellus does eventually find Demetrius, who wins the Roman over to the Christian faith. In fact, Marcellus agrees to join his former slave and Simon, the Big Fisherman (yes, that Simon, the Apostle Peter) on a mission to spread the Gospel of Jesus. Marcellus is betrayed by a former companion, and the Romans capture Demetrius. The former slave is imprisoned and tortured.
When such things happened in the New Testament account, the Church would gather to worship. On occasion, men like Peter and Paul were supernaturally rescued. At times they weren’t. But in this story, Marcellus plans and executes a bold and violent rescue of his friend. It makes for a good action sequence but raises issues of submission to authority and peaceful non-violence that are not mentioned in any way by the men that join Marcellus on his raid. 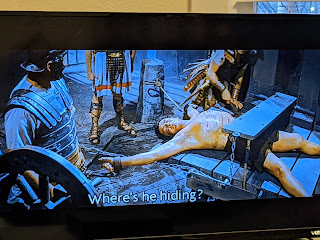 Though Demetrius is rescued, he is near death. The Apostle Peter (Michael Rennie) is brought in to care for their friend. Peter’s healing powers don’t live up to their full potential as seen in the book of Acts, though. In Acts 3, a lame man is immediately able to jump to his feet upon the word of Peter. In Acts 9, a good woman returns from death to life at Peter's command. The best Peter can do here is make Demetrius not quite so sick and he still needs to be carried about on a stretcher while he heals. (And he does heal. He becomes well enough to star in a sequel to this film the very next year, Demetrius and the Gladiators.)

The example of love, compassion, tolerance, and humility shown by the community of believers changes not just Marcellus's heart, but also his beloved Diane. While assisting Demetrius to escape from Roman authorities, Marcellus turns himself in to buy time for his friend. At his trial before the Emperor, Caligula (Jay Robinson), the tribune claims that he never flagged in his loyalty to Rome (though he did just break a Roman prisoner free) but he also will never deny Christ. He is sentenced to death. And Diana asks to go with him to death. (Though I wasn’t really sure whether this was due to love for the teachings of Jesus or for her man.)

Though The Robe won only two of the five Oscars it was nominated for (wins for Costumes and Art & Set Direction but not for Best Picture, Actor, or Cinematography) but I’m sure the film's makers would be thrilled to know that the Church and its Leaders earned the highest Movie Church rating of Four Steeples.
Posted by churchandstates at 10:31 PM