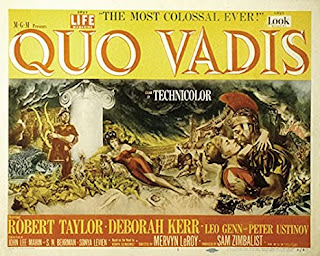 Along with the box office and Academy Awards love when the blockbuster Titanic came out, some complained that the film focussed on the love story of pauper Jack and pampered Rose while 1,500 lives were lost in the background. Perhaps James Cameron had Quo Vadis in mind as he wrote the script. While the 1951 epic is ostensibly about the burning of Rome and the persecution of the early Church, it's really about the love between Marcus Vinicius (Robert Taylor), a Roman military commander, and Lygia (Deborah Kerr), a Christian captive, daughter of a foreign ruler.

For me, Titanic holds up well, even if the romance is a tad sappy. The replication of the ship's disastrous sinking is spectacular.
Perhaps people back in the early 1950s found Rome's burning in the film breathtaking, but I found the effects to be underwhelming -- unlike the burning of Atlanta sequence in1939’s Gone With the Wind which still has quite an impact. The lions menacing the Christians in the arena is nearly comical because of the distance kept between the participants.

Mervyn LeRoy was a good director with actors, and he made classics such as Little Caesar and Mister Roberts. Though LeRoy gets at least two wonderful performances (from Peter Ustinov as Nero and Leo Genn as the emperor’s chief counselor, Petronius), Cameron is the master of spectacle as Titanic (and even intellectually empty films such as Avatar) makes clear. Sure, some very good matte paintings show gorgeous vistas and amazing crowd scenes in Quo Vadis, but the film's more than a bit of a slog at nearly three hours long.

Fortunately, here at Movie Churches, we're not here to judge films, but rather the clergy and churches in films, and this film features the early Church in Rome along with some rather notable clergy: the Apostles Peter and Paul.

Lygia is the central Christian figure in the film. Though a captured enemy of Rome, the daughter of a barbarian king, she is raised as the foster daughter of Roman General Aulus Plautius (Felix Aylmer). Plautius is an actual historical figure, but there is not strong evidence that he was a Christian as he is in this story (though history indicates his wife may have been).  The family is good friends with that famed traveling philosophy teacher, Paul of Tarsus. At least, that’s how Plautius introduces the Apostle to Marcellus. Plautius is afraid to refer to Paul as a Christian evangelist.

In the film, Paul is visiting the family shortly after a visit to Antioch and Corinth, a free traveler. But since this film is said to take place thirty years after Jesus’ death, approximately 63 AD, my understanding is that the historical Paul would be imprisoned -- but perhaps not. On the other hand, tradition does claim that the Apostle Peter was crucified upside down by the Romans following the city fires as depicted in the film.

Really, if you are going to have clergy in a film, it’s hard to do better than these two apostles, but the characters in the film have significantly different personalities from their presentation in the New Testament. 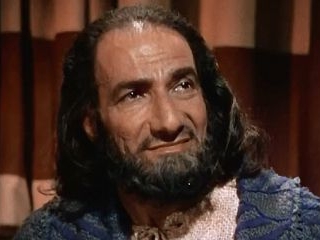 We first meet the film's Paul at General Plautius' home. While Marcellus and his friend are visiting him,  Plautius introduces Paul as a “teacher of philosophy” rather than as a disciple of Jesus. Paul goes along with this, saying, “I guess you could call me that.” Later when Paul and Plautius discuss this deception, Paul admits sometimes “strategy is necessary.” He says of Marcellus and his friend, “They are Rome. If we could teach them, we could teach the world.”
This doesn’t sound much like the Paul who wrote, “God chose the foolish things of the world to shame the wise; God chose the weak things of the world to shame the strong.”

When Lygia talks about her interest in Marcellus, Paul doesn’t seem at all concerned about a follower of Jesus marrying a worshiper of Rome's power. This Paul doesn’t seem like the man who wrote, “Do not be unequally yoked with unbelievers, for what partnership has righteousness with lawlessness?” But it ends up being Marcellus who doesn’t want to share his wife with Jesus rather than Christians worried about Lygia sharing her husband with Roman gods.

The most peculiar thing about the film's presentation of Paul is his attitude toward Peter. He's quite the fanboy. Paul excitedly introduces Peter as someone who was in the presence of Jesus. One gets the feeling he never met Peter before, but the Bible represents them as having a long relationship going back to when Paul became a Christian. In his letter to the Galatians, Paul in Galatia describes confronting Peter for compromising the faith. In his writings, Paul repeatedly tells about having seen the resurrected Christ himself, and is firm in his claim to having been called as an apostle.

But in the film, Peter comes to Rome to serve the Church with Paul. Together, they lead a worship service, and Peter tells the church the story of the death and resurrection of Jesus. This Peter is a much more mellow preacher than the Peter of Acts 2, who blames the crowd for killing Christ. Paul conducts a baptismal service, pouring water from a cup on people’s heads rather than immersing them. At first, I wondered if the filmmakers worried about offending Baptists in the audience, but then I realized Baptists back in the 1950s weren’t going to the movies.
Or rather, Baptists in the 1950s weren’t admitting they were going to movies.

For some reason, Peter is much older than Paul in the film. And Paul seems much more stereotypically Jewish than Peter. But both are portrayed as good men who love their Lord Jesus and desire to serve His Church.

And the Church comes off rather well in the film, too. They preach peace and tolerance in opposition to the tyranny of the emperor Nero. They are willing to be burned, thrown to the lions, or crucified rather than deny their Lord Jesus. So while I found the film to be rather a snooze, the church in the film certainly earns the highest Movie Churches rating of Four Steeples.
Posted by churchandstates at 6:46 PM