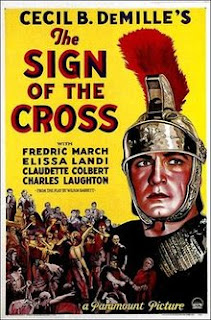 These last three weeks we at Movie Churches have been looking at films set in Rome during the early days of the Christian church. Based on two different novels and a play, each film has pretty much the same plot. A Roman soldier falls in love with a woman and they are separated by their faiths. The major difference is that in Quo Vadis and The Sign of the Cross, a pagan soldier falls for a Christian woman, whereas in The Robe a Christian Roman soldier falls in love with a pagan woman. All of the films portray these couples facing persecution and martyrdom from Rome.

Like Quo Vadis, The Sign of the Cross is set in Rome during the reign of Emperor Nero. Both films focus on Nero’s persecution of Christians, who he blames for the burning of the city. In this film, Fredric March plays the Roman prefect Marcus Superbus (as opposed to Taylor’s Roman prefect Marcus Vinicius in Quo Vadis or Burton’s Roman tribune Marcellus Gallio in The Robe. ‘M’ names were popular in the empire.)

March was a great actor. The year before this film came out, he gave a fabulous performance in the lead roles of Dr. Jekyll and Mr. Hyde. In this film, his performance is pure ham. On occasion, he emotes straight at the camera.

Mercia, the Christian woman that Marcus falls for, is played by Elissa Landi, and she's a rather bland character. Marcus risks his career to save her. He later walks with her into martyrdom (just as, two decades later, Jean Simmons would follow Richard Burton into martyrdom). I frankly just don’t understand what is so compelling about this woman, especially when the alternative is Empress Poppaea as played by the enchanting Claudette Colbert.

One way this film differs from the two epics from the 1950s is that those films feature famed Biblical characters, Peter and Paul. This film is, sadly, without any apostles. The closest we get is a character named Titus, a friend of the Apostle Paul, who brings a message from Paul to the church in Rome. It isn’t clear whether this Titus is the same Titus who received the epistle included in the New Testament, but he’s a swell guy.

The Sign of the Cross differs from the previous two epics in other ways. It was made in 1932, so it's not surprising that it was black and white rather than color, and it was made before the Hays Code came into effect. It would have been a different film if it had been made two years later.

Some have accused director Cecil B. DeMille of using the trappings of a Biblical epic to insert racy material into the picture --  of portraying much more sin by following up with some redemption. Throughout the film scantily clad men and women are onscreen, but there are two scenes that would never have been made under Hays. In one scene the Empress takes a milk bath. It is evident that Colbert is indeed naked and audiences watched the screen carefully looking for naughty bits. (Colbert does share the milk with a couple of friendly felines who drink from the side of the tub.) She also invites another woman to join her in the giant pool of milk, and we see the other woman's clothes drop to the side of the tub.

The other notorious scene takes place at a party at Marcus’ home. (The party isn’t called an orgy, but that is the implication). Marcus is frustrated that Mercia doesn’t join in the merriment, so he instructs one of his guests, Ancaria -- evidently a former lover -- to do the Dance of the Naked Moon. (The actress who plays Ancaria is played by an actress with the intriguing name of “Joyzelle.”) The dance has a clearly lesbian focus, with Ancaria caressing the clearly horrified Mercia. This scene was cut when the film was re-released in 1938, along with some of the gladiatorial fighting and scenes of naked women being attacked by crocodiles and gorillas. (These scenes wouldn’t be restored until the film’s DVD release over a half-century later.)

Really, though, our concern here is how is the church presented?

The church is enduring persecution. They meet secretly, signaling to each other by making the sign of the cross in the sand (this is not exactly James Bond-level spycraft) whispering that the meeting will be “at the grove, the Cresian Bridge.”

They try to sing quietly so as not to draw attention (which puzzles a child at the service who wants to sing loudly). Titus brings words of comfort from Paul, but he claims not to be a teacher himself.
Unbeknownst to the worshipers, the Romans have learned where they are meeting and prepare an attack as the service goes on. (They learned the location by torturing Mercia’s foster brother, Stephan.)

The Romans attack the worshiping Christians with bows and arrows in a rather spectacular scene. Later,  DeMille presents the slaughter of the Christians in the Coliseum as a sporting event, with spectators complaining about their seats.*

Though many of them seem reluctant or afraid, the Christians all choose to be obedient to Christ and follow Him, even though this leads to their deaths. Mercia is even given a chance to have her life spared if she will deny Christ, and she refuses. So though the Christians are a rather dull bunch, their faithfulness means they earn our highest rating of four steeples.
*A man and woman making their way to their seats have this interchange:
Wife: “We can’t see anything from this high.”
Husband: “Well, the gallery seats were good enough before we were married.”
Wife: “We were interested in each other then.”
Posted by churchandstates at 7:54 PM