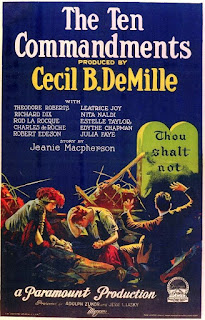 The Ten Commandments (1923)
People occasionally ask whether we’ve written about particular Biblical films here at Movie Churches, movie classics like Ben Hur or The Greatest Story Ever Told or Jonah: A Veggies Tale Movie. Usually, the answer is “no” because we write in this blog about Christian churches and Christian clergy. Most biblical epics don’t depict such things because most of the Bible was written before there was a Christian church.
There are Old Testament films like Noah, David and Bathsheba, and The Bible (the 1966 film which only covers Adam to Abraham) that obviously can't have a Christian church. But even films about the life of Christ (The Nativity Story, The Passion of the Christ, Jesus Christ: Superstar) usually don’t get to the Church. We have covered Paul the Apostle. If we ever manage to stay awake all the way through The Robe, we may write about that.

The Ten Commandments turns out to be a different story. We won’t be writing about the 1956 Cecil B. DeMille epic because it has no church -- it covers the birth of Moses through the Exodus but there's no priest, pastor, or nun to be found. But the 1923 silent version of The Ten Commandments, also directed by Cecil B. DeMille, is a different story. 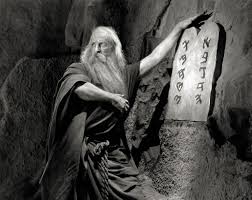 A title card at the opening of the film reads, “Our modern world defined God as a ‘religious complex’ and laughed at the Ten Commandments as OLD FASHIONED. Then, through the laughter, came the shattering thunder of the World War. And now a blood-drenched, bitter world -- no longer laughing -- cries for a way out. There is but one way out. It existed before it was engraven [sic] on Tablets of Stone. It will exist when stone has crumbled. The Ten Commandments are not rules to obey as a personal favor to God. They are fundamental principles without which mankind cannot live. They are not laws -- they are the LAW.” 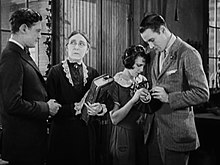 Mrs. Martha McTavish (Edythe Chapman) has raised her sons, John (Richard Dix) and Dan (Rod La Rocque), to be God-fearing gentlemen. Their home is decorated with framed prints of the Ten Commandments such as “Thou Shalt Not Steal.”

But Dan grows up to be a mocker of God and the Ten Commandments. “The Ten Commandments are bunk and should have been buried with Queen Victoria. I’d like the Ten Commandments better if they could mend this sole!” Dan says, staring at his worn shoe. He tells his mother that he is going to go out into the world and break all of the commandments; by doing so he'll be rich and successful (one can see there might be flaws in this plan). He falls in love with a beautiful homeless woman, Mary (Leatrice Joy), and marries her. (I wondered why Mary married Dan knowing he planned to break all of the Ten Commandments -- which would include the one about adultery.) Dan becomes a successful contractor, apparently becoming quite successful. But his mother will not take any help from him since she considers his riches ill-gotten.

John doesn’t seem to be nearly as successful. He doesn’t marry, and he doesn’t seem to be making a great living as a “humble carpenter.” He's in love with Mary as well (his brother realizes this and mocks him for breaking the commandment about coveting).

There is a rather strange scene in the film about how the family spends a Sunday afternoon. All the characters are at Mrs. McTavish’s house, and Mary puts a record ( “I’ve Got Those Sunday Blues”) on the player. Mary and Dan dance to the music. Mother reprimands the two for “Not Keeping the Sabbath Holy” whereas the good son, John, sees nothing wrong with “wholesome fun” on the Sabbath. The thing I found strange about the scene is that there is no indication that either Mother McTavish or John have gone to church that day or plan to. This was, of course, deeply disappointing for the purposes of this blog and I was a little concerned.

But a church does become a central part of the story -- Dan accepts a contract to build a church. And this isn’t some simple country chapel. From the model, it looks like a great, Gothic cathedral built in the downtown of a major city. It seems like quite the lucrative deal, but Dan wants to make it even more lucrative. 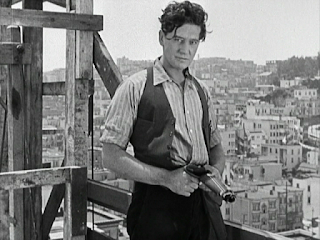 Dan tells his workers to use double the sand in the concrete mix to save money. He apparently has a long history of cutting corners in his work, which makes one wonder why he was contracted for building this church. (It never is clear who hired him or what denomination of church is being built. Whoever did the hiring, why would they hire this shyster?)

Dan hires John to be the boss-carpenter of the church project. When John and Mary are on a high floor of the church project, the concrete crumbles under her feet and she almost falls to her death. John confronts Dan about the shoddy materials in the building. Dan claims John’s just trying to bring him down so he can have Mary.

Dan sees he will be held accountable for his dastardly deeds, and he tries to flee the country in his yacht (The Defiant). But his yacht sinks, and Dan dies. John is free to marry Mary.

As we have said before, the Church is more than a building. But in this film, all we have is a church building. And a deadly, poorly constructed (to put it lightly) building at that. So the church of The Ten Commandments receives our lowest rating of 1 Steeple (and that steeple is probably going to fall to the ground).
Posted by churchandstates at 9:08 PM

Email ThisBlogThis!Share to TwitterShare to FacebookShare to Pinterest
Labels: Cecil B DeMille