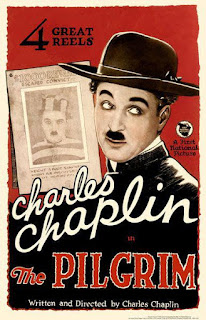 The scene takes place in a train station. Charlie plays an escaped convict trying to work up the courage to buy a train ticket as a police officer enters the station. This scene is particularly disturbing now -- not because of the police officer and the criminal and the current controversies about law enforcement. No, the very disturbing thing in this scene is a water cooler.
To avoid looking face to face at the officer, Charlie turns to the water cooler for a drink of water. He uses a cup that's chained to the water cooler. Everyone in that train station who wanted a drink of water used the same cup. 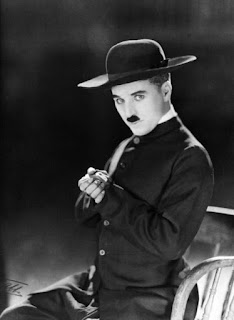 There is no apparent protocol for cleaning this cup. So some fellow with T.B. might be taking a big swig of H2O, followed by someone with polio, followed by someone with the common cold. What makes this all the more disconcerting is that this film came out only a few years after the 1918 Flu Pandemic. It’s not like they had no idea of how diseases spread. Where I live, in Seattle, they did shelter-in-place back in the day, yet people were all still sharing this same cup in the train station. It makes someone in 2020 shudder.

Anyway, on to what this blog is about, a movie with a church.

Charlie Chaplin plays Lefty Lombard alias Slippery Elm, a convict who escaped from prison by climbing a drainpipe in the dining room and swimming through the sewer (perhaps giving Andy Dufresne the idea decades in advance). He steals clothes from a man at a swimming hole, and that man apparently is a clergyman. (This is a rare silent film where Chaplin doesn’t wear his Little Tramp outfit, but only prison stripes and the clerical collar.)

Charlie doesn’t seem to notice that he's dressed as a clergyman until an eloping couple at the train station chases him, hoping he'll perform their marriage ceremony. Charlie escapes on a train, leaving it at random in a small Texas town.

Meanwhile, in a small church in the Texas town (a Church Without a Name and of no discernable denomination), Deacon Jones posts an index card on the bulletin board reading, “Special Notice - The Reverend Philip Pim our new minister will arrive on Sunday.”
A small group of congregants reads the notice excitedly. A young woman says to her mother, “I wonder if he’s young.” 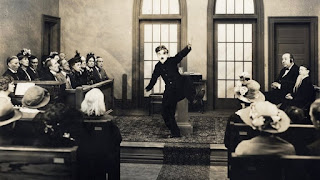 The interior of the church is fairly nondescript, but there are a couple of stained glass windows with a couple of androgynous figures that I certainly couldn’t place from Scripture or church history. Also in the congregation is a strange figure -- what looks like a teenage boy wearing a skull cap and a fake beard strapped to his head with a rubber band (he looks like a Hasidic Jew from a vaudeville review).

When Charlie gets off the train in Devil’s Gulch, Texas he is greeted by a man with a badge. Charlie puts his hands together in front of himself, ready to be cuffed. Instead the man shakes his hand and says, “The Rev. Mr. Pim, I believe? I’m Sheriff Bryan. The church members are waiting for you.”

The same congregants we saw earlier greet the man they believe is their new pastor. Charlie is told that he’s there in time for the service and they’re heading for the church.

But before they leave the station, someone brings a telegram to Deacon Jones. The Deacon says he doesn’t have his glasses, so he asks the “Reverend” to read the telegram. It reads, “Deacon Jones - Devils’s Gulch TX - Cannot arrive as expected, will be delayed for a week - Reverend Pym.” 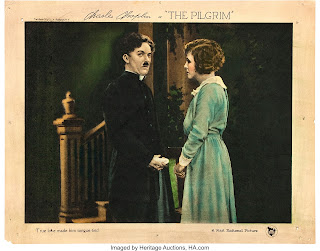 Charlie doesn’t read it to Deacon Jones, but makes up something about a sick relative. The Deacon tears up the telegram and throws it to the ground.

Also at the train station, Charlie notices a liquor bottle in the Deacon's back pocket. Charlie steals the bottle and puts it in his own back pocket. As they walk toward the church, both men slip on a banana peel, the bottle breaks, and both men ignore the liquid spilled on the sidewalk.

Charlie, seated at the front of the church, looks to the side, where the choir looks to him like a jury. In fact, the whole sanctuary looks like a courtroom to him, and he gets rather nervous. He pulls out a cigarette, but dirty looks force him to return the cigarette to his pocket.

The collection is taken, and Charlie tries to take the money for himself, but Deacon Jones takes the money away, seeming to view Charlie’s action as absentmindedness.

He stands at a pulpit with a very large Bible and says, “My sermon will be David and Goliath. Now Goliath was a big man and David was a little man.” He goes on to act out that whole story and doesn’t scrimp on depicting the rock hitting the giant’s head or David chopping off that same head. This delights a young boy in the church who seemed bored previously.

As the film goes on, Charlie encounters a former cellmate, Picking Pete, who threatens to uncover Charlie's true identity. Charlie finds himself on the side of good as he tries to protect the kind people in the church from the wiles of Pete.

The church overall comes off well in this film, but it did make me wonder about their pastoral search process. If they didn’t even know the age of the incoming minister, what else didn’t they know? Did they know anything about his Biblical and theological convictions? Did they know anything about his views on church polity or organization? Did they even know if he was a former felon? (The Narrator says, “They did not.”) 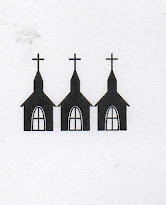 If this unnamed church could shape up its search process, they could perhaps raise their current Movie Churches rating of Three Steeples to Four.
Posted by churchandstates at 5:19 AM