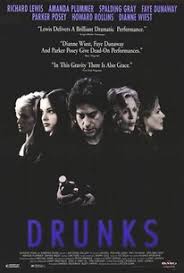 One of the first Sunday school lessons I distinctly remember (at Santa Rosa First Presbyterian Church) was about the nature of the Church. I don’t know if I was in the 2nd, 3rd, or 4th grade, but it was somewhere about there. I was rather cynical about the basic lesson:  “The Church is not a building, the Church is people.” I remember thinking, “Of course the Church isn’t just a building, who thinks that?”

But you know, though the Church isn’t a building, God does use those buildings in some mighty important ways. I was reminded of this while watching the film Drunks on Kanopy.

Peter Cohn directed the 1995 film (with a screenplay by Gary Lennon, based on Lennon’s play, Blackout). The film is set on one night, primarily at an AA meeting at St. Luke’s Lutheran Church. About thirty people gather in the basement of the church, sitting on folding chairs, surrounded by Sunday School art and some AA posters (with sayings such as “One Day at a Time” and “But for the Grace of God”). 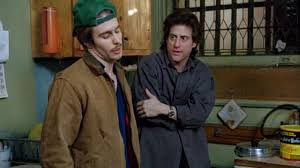 The film stars the comedian Richard Lewis but also features a number of stars and future stars as meeting attendees. Oscar Winners Faye Dunaway and Dianne Wiest appear, and we get to see Sam Rockwell decades before his Oscar win. There are several attractive young women among the attendees (Parker Posey, Calista Flockhart, Margaret Devine) -- which seemed unusual to me for an AA meeting, but I’m not an expert.

Though I’m not an alcoholic (I have plenty of other problems), I have attended a couple of AA meetings. The film captures much of the feel of such meetings, from my experience. There’s an awkwardness of those who gather and yet a feeling of family. People seem glad to see each other at the beginning of the meeting. One young woman says to an older woman (Fanni Green), “Jasmine, I’ve been reading the Bible.” 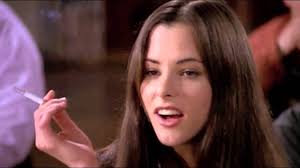 Jasmine asks, “Where’d you start?”
“In the beginning,” is the answer.

As is the custom in AA meetings, people share their stories, beginning with a very reluctant Jim (Richard Lewis) who then leaves the meeting for an unsuccessful solo battle against temptation. But others share stories of victories and defeats. In the movie, I noticed something I've seen in real meetings: stories of horrible things that are followed by laughter. It's not that people think those horrible things are good or fun, but it is the laughter of recognition, people showing either “I’ve done that” or “Yeah, I could have done that.”

One of the standout testimonies comes from Louis (played by comic monologuist Spalding Gray). He says, “I came for choir practice. I must have come on the wrong night. I’m not an alcoholic. But I got drawn into the stories here. At first I thought, ‘I didn’t realize the choir had so many problems.’ I’m a hophead. I like beer. If there’s a higher power, He made beer. I like the Bible. My mother used to read it to me. ‘There is a season for everything.’ There’s a time for drinking. There’s a bar around the corner I like to go to. Tonight I needed the Bible or beer. But I came here for the choir practice. I prefer your narrative to their hymns.” (I don’t think it’s actually a binary choice.) 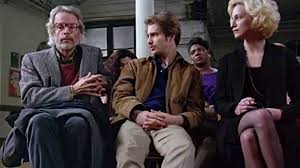 During the meeting, they pass the basket to support the meeting and ask visitors to introduce themselves, so the meeting has arguably the two most despised portions of worship services. The meeting closes with a moment of silence and then everyone recites the Serenity Prayer.

To be clear, the meeting isn’t a church worship service, but it takes place in a church. Many AA meetings in the United States are in churches, perhaps the majority. I consider this a very good thing.

I used to be a part of a church that opened itself up for community concerts. I was at one of those concerts and overheard one woman saying to another, “I’ve heard besides concerts, a church meets here as well.”

A pastor friend of mine once said, “A church needs to ask itself, ‘If it was gone, would its community notice?’”

One of the ways a church can serve its community is to provide a place for other worthwhile activities if this doesn’t interfere with the ministry of the church. The Church isn’t a building, but God can use those buildings called “churches,” and that’s why I’m giving St. Luke’s in Drunks our highest rating of Four Steeples.


(This film is currently available on the library partnered service Kanopy. There is harsh language in the film, including the name of Jesus being used in a way not typical in a church. But such language is true to AA meetings. There is also a scene of gratuitous nudity in the film, but fortunately, that doesn’t take place in a church.)
Posted by churchandstates at 9:44 PM