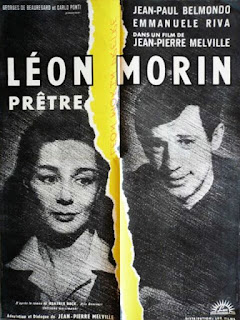 Leon Morin, Priest (1961)
Frankly, I wasn’t looking forward to watching this week’s film on the library-sponsored streaming service, Kanopy. The IMDb plot summary reads, “Set during occupied France, a faithless woman finds herself falling in love with a young priest.”
I’m afraid my expectations for a French film of that period (1961) were that the priest would eventually reciprocate that romantic love, and I’d end up very annoyed. But I was wrong.

Jean-Pierre Melville goes another route in his direction and adaptation of Beatrice Beck’s novel. Instead of telling of a sordid affair, he tells the story of a seeking woman whose love for a man turns to love for God. And a faithful priest has a part in that journey.

The film is set in a small town in France at the beginning of the Occupation during World War II. A woman named Barny (Emmanuelle Riva) is unconcerned about the Italian soldiers who have come to her town. In their silly uniforms and feathered hats, the Italian army inspires more quiet mockery than fear. Things change when German soldiers take their place.

Barny is a Communist, and she has Jewish friends. They have reason for concern about the new overseers. Barny and her two friends, all mothers, decide to go to the local Catholic Church to have their children baptized. They must then decide on Godparents and alter the dates on the baptismal certificates to make it look like the children were baptized as infants. (A priest says, “We practically crank out baptismal certificates.”) 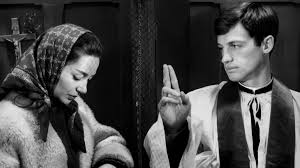 This arouses Barny’s interest in the church. She decides to go to confession just to argue with a priest. There are three confessional stalls and each has the name of a priest on the door. Based on the names alone she decides to avoid one priest because he sounds old and another because he sounds middle-class. But to her ear, Leon Morin sounds like a peasant and she goes in.

Barny tries to pick a fight with the priest in the confessional, but he doesn’t take any of her bait. He doesn’t get angry, doesn’t seem shocked by her Marxist declarations. He declares her absolution of sin even though she doesn’t technically confess. And he gives her a penance of kneeling on the stone floor of the sanctuary before she leaves. She scoffs but kneels before leaving.

Leon (Jean-Paul Belmondo) offered Barny an opportunity to borrow books. She comes to his office at night and makes a snide remark about the materialism in the church -- then notices patches in the priest's cossack. He points to the bookshelf and offers any book. When she picks A Life of Christ by Karl Adam, Leon remarks, "Oh, you would choose that one!" (I didn't get the joke until I Wikied Adam and found he was the most prominent theologian to reconcile Catholicism with Nazism.) She devours the book and comes back the next week for another. The weekly book borrowings continue along with weekly discussions. 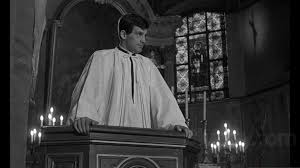 Barny is not the only woman in the village that visits the priest. Christine (Irene Tunc), a woman from Barny’s office with Vichy sympathies, asks Leon whether she should collaborate with the Germans. He notes the Jews that are being deported and the responsibility of Christians to care for those in need. Christine responds, “Why should I risk my life or the life of my daughter for those Kikes?”
“Our Lord was a Kike,” the priest answers.

Another woman, Marion, known for her relationships with a variety of men (two men with the French Resistance, two with the Vichy government and a German), sets her sites on the young priest. Christine says of the woman, “Once she plans on having a man, she doesn’t fail.”
Marion does fail -- in that way -- with the priest. In his office, she makes a suggestion, “You should be a country priest and I could be your housekeeper” (with the implication of a more intimate domestic relationship.)

“A country priest’s housekeepers should be old hags,” Leon says. “Maybe in a few years.”
After this rather sardonic insult, he strikes a more kindly tone, “You poor birdbrain. My poor child, it’s crazy how much the Lord loves you. You’re one of his favorites, and Heaven was made for you, especially for you.” The town is astounded to note Marion becoming a regular church-goer.

Marion isn't the only person to radically change. Barny herself, in what she calls a “catastrophe,” is convicted of her need for conversion. She is shocked when Leon doesn’t treat her decision with acclamation. 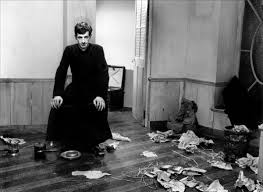 When she tells the priest she feels she must become a Christian, the priest responds, “Think before you make such a monumental decision.”

“I have no choice,” she says

“I have no choice but to join the Church.”

“A clear case of possession,” he says mockingly, “I must exorcise you.”

“You did everything you could to make me a Christian,” she declares.

“You’ll ruin your life.” he says, “Have you ever thought of being a Protestant? They’re fine people.”

“Why are you making fun of me?”

Not only does Barny come to faith, but her young daughter Danielle does as well. Danielle comes to her mother one day and says, “I know everything. I understand everything now. I know who made me.”

“Who?” her mother asks

“Who told you that?”

Leon continues to counsel Barny, in matters of theology and Christian living. I enjoyed Leon’s response when Barny tells him she never answers the door, “It could be the Gestapo.”
He admonishes her, “It could be someone in need.” That soon turns out to be the case. Jewish friends come to Barny for help in getting food and hiding from the Germans.

Along with seeing Leon as a counselor, we do have one opportunity to see him as a preacher. From the pulpit, he tells his congregation, “Are you Sunday Christians in a rush to leave God? Most of you leave before the final Gospel reading. If you are Christians in name only you drive away the undecided. You crush their desire to come. Each of you should be an apostle in your own setting.”

Barny continues to want Leon to be more to her than just a priest. She bluntly asks him, “If you were a Protestant pastor, would you marry me?” She even asks God to give her just one night in her bedroom with the priest.
Leon tells her, “I wish you pursued God as ardently as you pursue men.”

When the priest tells Barny he is leaving their town to minister to unreached parts of the country, Barny finally realizes God has been doing what was best for her all along, by providing a pastor for her rather than a lover. She prays, “Thank you, Lord, for loving me more than I love myself.”

This blog always rates the clergy and churches in films rather than the films themselves. But if we were recommending films here, Leon Morin, Priest, would be highly recommended. As for Leon, though he is more sympathetic to Marxism than I would ever be, and though he is at times a bit brusque with the women in his congregation, and though he attributes a quote to St. Paul that didn’t come from St. Paul (“The world would be better if you were”), we’re giving him our highest Movie Church rating of 4 Steeples.
Posted by churchandstates at 7:27 PM