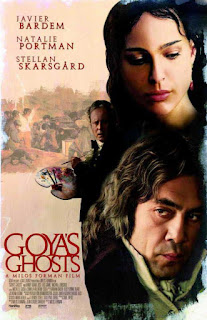 Goya's Ghosts (2006)
Goya’s Ghosts opens with priests and monks around a table passing around and studying prints of some rather grotesque works of Francisco Goya. On the positive side, I’ve long believed that the Church these days needs to take art more seriously. On the other hand, they are looking at the art with the eye of a censor.

The year is 1792, and in Spain’s Holy Office of the Inquisition, the clergy are particularly upset about the prints that mock clergy as hideous bloodsuckers. They are appalled to hear that these prints are available for sale on bookstores and the streets. But one man comes to the defense of Goya and others ask why. “Because he is the greatest artist in all of Spain,” Brother Lorenzo (Javier Bardem) says. “The ugliness he portrays is the ugliness in the world.” We soon learn that Lorenzo has a connection with Goya (Stellan Skarsgard) -- the artist is painting his portrait.

At the artist’s studio, they discuss the price of the portrait. There is an extra charge per hand painted, so the priest decides to keep his hidden in his robe. The priest notices a portrait of a woman and asks about it. Goya tells him it is a portrait of Ines Bilbatua (Natalie Portman), the daughter of a prosperous merchant who has also served as a model for angels in his work (this runs counter the clergymen's theory that Goya uses prostitutes for his models of angels.) 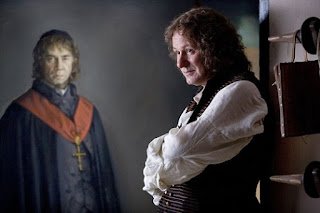 Lorenzo has been given the responsibility of reinvigorating the work of the Inquisition, training spies. “If someone is talking of Voltaire rather than the church, that man is probably a Judiaizer, or worse, a Protestant. If he is hiding his penis while urinating, he is probably circumcised. Bring their names to the Holy Office.” One of the names brought to the Holy Office is Ines Bibatua. She was at an inn and refused to eat a suckling pig offered, preferring chicken. Because of this, she was accused of being a Judaizer.

In the Holy Office, Ines is questioned and then brought to The Question (torture). Under torture, Ines confesses to being a Judaizer. She is then left naked in a dungeon, chained with other prisoners. Upon the urging of Goya, Lorenzo goes to see her. He gives her a robe and tells her he will pass along greetings to her family. But he tells her he doesn’t have the power to free her. He asks if he can pray for her and in her desperation she agrees happily. He holds her as they pray, leading to… greater intimacy. 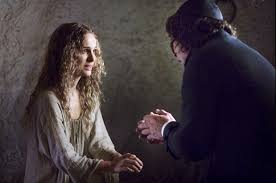 Ines’ father, Tomas (Jose Luis Gomez), does all he can to free his daughter. He offers a large sum of gold to the church to rebuild the Convent of St. Thomas (for whom he was named). And he invites Goya and Brother Lorenzo to dinner in his home. During dinner, they discuss whether answers obtained during torture can be trusted. Lorenzo assures Tomas The Question is reliable and adds that he is sure God would preserve him through torture. Tomas orders Goya to leave, and his sons escort him out of the house. Then Tomas tortures Lorenzo until he confesses in writing to being a monkey, son of a chimpanzee and an orangutan, who is trying to undermine the Church. All of this fails to lead to Ines’ release.

Because of Lorenzo’s “confession,” he is forced to flee Spain for France. Fifteen years later, he returns to Spain along with Napoleon Bonaparte’s conquering army. Lorenzo finds Goya and tells him that in France he read the works of Voltaire and Rousseau. He has left the Catholic faith and is now an evangelist for the principles of the French Revolution. 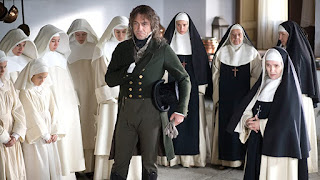 The French free all the prisoners of the Spanish Inquisition, including Ines. After fifteen years in prison, she is a broken woman. She wanders the streets in search of her family, finding them all dead in her house, killed by the French. She goes to Goya. With her parents and brothers dead, all she wants is to find her daughter. In her cell, she had given birth to Lorenzo’s child, who was immediately taken from her and sent to a convent.

The French in Spain deposes the Spanish King (Randy Quaid) and Queen (Blanca Portillo), putting Napoleon’s brother in charge. All churches are closed. French soldiers ride horses into a church service. , and when the cantor will not stop singing the Mass, he is shot. All clergy who will not deny their faith and take on the principles of the Revolution are imprisoned.

But true to history, the British eventually come, and, with the help of the Spanish people, drive the French from Spain. Lorenzo finds himself again on the wrong side. Under the threat of death, he is asked to deny the principles of the Revolution and turn again to the Church. This time, Lorenzo holds true to his principles of the moment.

Goya’s Ghosts is a well-made film, as one would expect from Milos Forman, a truly great director. But (as you already know) we aren’t here to evaluate films, but how the church and clergy are presented in a film.
Since a chief focus in the film is the Spanish Inquisition, the Church doesn’t come off well. Still, this film, with its presentation of the French Revolution, reminded me of current events. Generations and institutions are evaluated by cancel culture solely by their worst features and then deemed no longer worthy of existence. The French try to rid the world of the Church because of its excesses -- such as the Inquisition, but the Spanish believe there is more to the Church than its faults, and restore it to its venerated place in society. 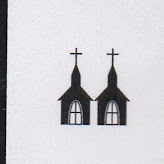 So what is our Steeple Rating for the clergy and church in Goya’s Ghosts? The treatment of Ines by the Church and Lorenzo particularly would tempt us to use our lowest rating, but the priests and nuns who were willing to stand for their faith in the face of the Revolutionaries deserve some respect, leading to a Two Steeples score.

Posted by churchandstates at 10:11 PM