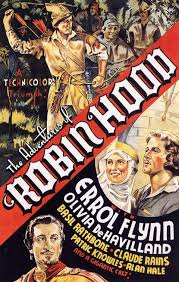 Robin Hood had been portrayed on the screen many, many times, and he’ll be coming again to a theater near you later this month. But there is a clear critical consensus (which I agree with) that the best portrayal of Robin Hood was filmed decades ago in Hollywood’s Golden Age. (I have zero hope the version opening later this month will top it.) 1938’s The Adventures of Robin Hood tells the story best. Errol Flynn’s Robin is the most dashing and gallant, and most importantly for us here at Movie Churches, Eugene Pallette gives the most memorable portrayal as Friar Tuck.

I’ve watched this film many times through the years, but until I watched it again for the purposes of this blog, I don’t think I’d ever realized how much a part clergy and the Church play in the story (and in many other tellings of the the legend we’ll be looking at this month). The good Friar isn’t the only representative of the church in the story. Let’s begin with another one. 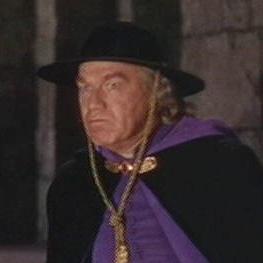 In this telling of the story (set in England in 1191), the King, Richard the Lionheart, has gone off to the Crusades -- which in this film is portrayed as a noble endeavor. Richard is captured and held for ransom, and his evil brother, Prince John usurps the throne of England. With the aid of Sir Guy of Gisborne (Basil Rathbone) and the Sheriff of Nottingham, John exploits the common people with burdensome taxes. John is also allied with the Bishop of the Black Canons, who also robs from the poor by taking compulsory tithes. We see the Bishop enjoying an opulent banquet while his parishioners throughout the land starve.

The worst thing the Bishop does is betray King Richard. When the Bishop discovers that the king has returned to the land incognito, he snitches to Prince John. He looks to undermine the rightful king. 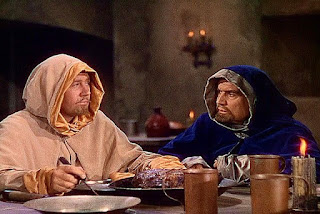 The Church plays a role in other aspects of the story. Robin robs from the rich, and that includes rich churchmen (like the Bishop). The wealthy clergy who venture into Sherwood Forest risk their possessions, “What is this country coming to when even a high churchman can’t travel this country in safety?” one says. (In spite of their thefts, Robin and the Merry Men seem to want to show some respect to the Church and what it represents).

When Richard returns to England, he disguises himself and his men as men of the cloth (and Robin tries to rob them). And when Robin and Richard need to sneak into John’s castle, they again dress as clergy.

But really, the clergyman people think of with Robin Hood is Friar Tuck. In this version of the story, when Robin encounters Tuck, the friar has a leg of meat and Robin wants to steal it. The Merry Men tell Robin Tuck is a man known for his “piety.” In fact, the friar is known for his swordsmanship. Robin and Tuck end up battling, a close battle, but Robin wins.

Robin asks Friar Tuck to join his troop to provide spiritual counsel, “someone for our christenings.” Friar Tuck does join in with Robin and his men and looks out for the bandits’ best interests. “He’s one of us!” Robin says.

In the end, King Richard is restored to power, Robin is honored, as is Friar Tuck. But the Bishop is exiled from the land.

So we’ll give Friar Tuck our highest Movie Church rating of Four Steeples, but the Bishop (who does repent a bit), gets a rating of Two Steeples -- for an average of Three Steeples for the movie.

(Bonus Robin Hood clergy - Robin Hood Daffy (1958), in which Porky Pig plays the good Friar Tuck. In this version, Friar Tuck is wiser and more competent than Robin Hood. Considering that Robin Hood is played by Daffy Duck, that’s not a very high bar. It is amazing punsters at Warner were able to resist switching roles to have Friar Duck. See also Rabbit Hood. )
Posted by churchandstates at 7:14 AM