Robin Hood Movie Month Continues with a Yank in the Lead 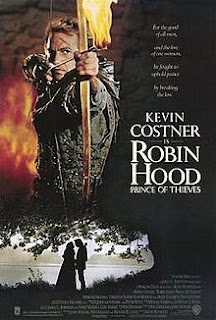 In Mel Brooks’ 1993 spoof, Robin Hood: Men in Tights, Prince John asks Robin why anyone should listen to him. Robin (Cary Elwes) responds, “Because, unlike other Robin Hoods, I can speak with an English accent.”

Directed by Kevin Reynolds (Costner worked with him on Waterworld as well), this telling of the story has Robin of Locksley join Richard the Lionheart on the Crusades, but Robin is captured imprisoned in Jerusalem. After escaping, he returns to England with a Muslim companion, Azeem (Morgan Freeman). When he reaches land, Robin kisses the ground, giving thanks to God. He learns that King Richard is still in France and the land is ruled by the Sheriff of Nottingham (Alan Rickman). Prince John is strangely absent in this version, but the Sheriff is aided by Guy of Gisborne, Mortianna the Witch, and the Bishop of Hereford (Harold Innocent). 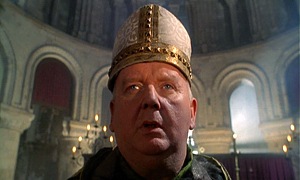 Robin tries to go home, but learns that his father, Lord Locksley (Brian Blessed), is dead. This is especially poignant because when Robin left, his father had called the Crusades a foolish quest. The Bishop welcomes Robin back, saying, “I see the boy I knew in the man before me. Welcome home, John Locksley.” But Robin learns that the Bishop isn’t really so...welcoming.

The church had accused Robin’s father of heresy, which his father denied -- further proof of his guilt. Robin’s father was killed by the church, as other wealthy landowners were killed, so the church could confiscate their goods.

The Bishop doesn’t have a problem with the Sheriff consorting with a witch with an upside down cross. Nothing heretical to be seen there.


Robin encounters a band of outlaws led by Little John and Will Scarlet. Robin not only joins the crew, but becomes their leader, training them for battle. They rob from the rich, which includes the clergy, that past through Sherwood Forest. When the Merry Men encounter a drunken clergyman, Little John greets him, “Welcome to Sherwood, Friar! You travel in poor company when with the Sheriff’s soldiers.”

Friar Tuck, who’s pulling a wagon filled with kegs of beer (“the Lord’s brew”) won’t willingly surrender. He battles Robin -- even biting his leg -- but Tuck eventually admits defeat. Robin asks him to join them, to minister to his men and, well, make beer.

Tuck is a fan of beer. At various times he says, “Let us learn of God’s bounty, though beer” and “This is grain, which any fool can eat, but for which the Lord intended a more divine means of consumption. Let us praise our Maker and glory in His bounty by learning about...beer!” He even offers a drink to Robin’s Muslim friend.

“Alas, I am not permitted,” Azeem tells him.

“Then you talk, and I’ll drink,” the Friar replies.

But even with this fondness (perhaps over fondness) for brew, the Friar is still a much better clergyman than the Bishop, though the Bishop does provide some churchly duties. He prays for God’s blessing on the Sheriff of Nottingham’s mission to pursue the outlaws of Sherwood Forest. (The Sheriff smirks throughout the prayer.) 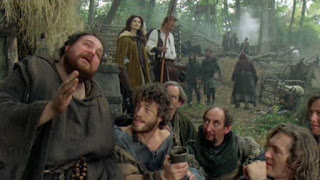 But most of what the Bishop does is fairly reprehensible. Robin’s father, the Lord of Locksley, is just one of many noblemen he accuses of heresy and kills in order to take his land and property. He schemes with the Sheriff to solidify the lawman’s power by marrying Maid Marian (Mary Elizabeth Mastrantonio). Robin threatens to stop the marriage (which is against Marian’s wishes), and the Bishop attempts to perform the ceremony even as the Sheriff tries to consummate the marriage (and yes, it is as bad as that sounds).

In the end, Friar Tuck who must confront the Bishop, who is trying to escape the wrath of Robin Hood.

Friar Tuck: “So you sold your soul to Satan, Your Grace? You accused innocent men of witchcraft and let them die.”

The Bishop: “Brother Friar, you would not strike a fellow man of the cloth?”

The Friar weighs the Bishop down with sacks of treasure, “You’re going to need lots of gold to help you on your way. Here’s thirty pieces of silver to pay the Devil… on you way to hell!” And Tuck shoves the Bishop out a high window.

For our Movie Churches Steeple Rating this week, we’ll take an average of the two prominent clergymen in the film. The Bishop of Hereford receives our lowest rating of one Steeple for greed and murder and abetting attempted rape. Friar Tuck fights for what’s right, so he receives our second highest Three Steeples. (Habitual drunkenness keeps him from our highest rating of four). Between the two, the clergy of Robin Hood: Prince of Thieves receive the average rating of Two Steeples.

(Above I mentioned Robin Hood: Men in Tights, Mel Brooks’ spoof of the Robin Hood story. It really didn’t have enough Christian clergy to merit a Movie Churches post, as the most prominent clergy in the film is Rabbi Tuckman, played by Brooks himself. There is an Abbot in the film played by Dick Van Patten that has my favorite line of the film. Some calls out to him, “Hey Abbot!” sounding much like Lou Costello, and the Abbot says, “I hate that guy.” If you have no idea what I’m talking about, see Abbott and Costello Meet Frankenstein, stat!) 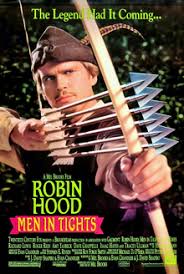 Posted by churchandstates at 7:25 AM