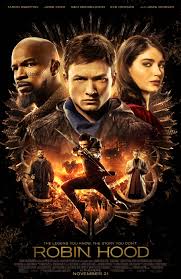 Robin Hood (2018)
Friar Tuck warns us at the beginning of this new telling of Robin Hood to “forget history” and “forget what you’ve seen before.” The filmmakers (director Otto Bathurst and writers Ben Chandler and David James Kelly) do a great job of forgetting history in their hipster version of this story. More relevant for us here at Movie Churches, they also forget theology and ecclesiology -- if they knew anything about these things to begin with.

Taron Egerton (Kingsman) plays Robin of Loxsley, who receives a draft notice from the Sheriff of Nottingham to serve in the Crusades (like they did in the day). In Arabia, Robin tries to come to the aid of a prisoner of the English (with an Arab name that translated as “John”). Robin is shot for efforts and is sent back to England on a “hospital ship.” Robin finds his property has been confiscated by the Sheriff of Nottingham through the War Tax (“for our church and its glorious crusade”) because Robin is said to be dead. John, who came to England with Robin, urges him to fight the power by becoming a thief, stealing from the Sheriff and the Church using a secret identity, “The Hood.”

Though at night, Robin is the Hood, during the day he still plays the part of Robin of Loxley, a dandfied noble. Robin’s aim is to win the trust of the Sheriff (Ben Mendelsohn) in order to learn his plans. When he goes to church, Robin pours a large bag of coins in the offering plate -- catching the Sheriff’s attention. (Coins, especially of the gold and silver variety, attract a different kind of attention in Robin’s world than coins attract when they are dropped in a plate these days.) After giving large sums to the church coffers during the day, he steals it all back (with very much interest) at night as the Hood.

The Church of Rome is not pleased about the Hood’s attacks. The Crusades and the War Tax are just a money making scam, and the Church is not happy about the loss of funds. They send out the Cardinal (F. Murray Abraham) to deal with the situation. Robin is in the meeting of the Sheriff with the Bishop, where they discuss their plan to use the funds to overthrow the King (we never see the King or learn which King this was supposed to be). 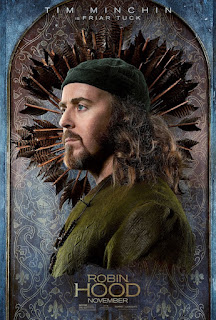 The Cardinal is a sinister character, concerned about the people adopting the Hood as a hero. He advocates cracking down on the poor, “Fear is the greatest tool in God’s arsenal. That’s why we invented Hell.” The Cardinal talks about the necessity of quenching hope in the people. He doesn’t seem familiar with the Scriptures that promise hope. When Friar Tuck mentions “turning the other cheek,” the Sheriff and the Cardinal seem unfamiliar with that portion of Scripture as well.

Friar Tuck serves as a pastor to both Robin and the Sheriff. Robin goes to him for confession; the Sheriff tells Tuck he has nothing to confess. Neither knows that Tuck is secretly plotting against the Sheriff. When Tuck attends a party to honor the Cardinal -- a party with roulette and craps and scantily clad women -- he steals keys that allow Maid Marian to steal documents proving that the Sheriff is in cahoots with Arab princes to use the Crusades as a money making scheme.

Robin knew Tuck would be caught, so he turned him into the Sheriff and the Cardinal as a thief. The Sheriff asks Robin to kill Tuck, but Robin says that would only make Tuck a martyr. He says a better punishment would be for Tuck to be defrocked. Later Robin apologizes to Tuck for having him defrocked, but Tuck said that set him free “to work like the devil.”

In many previous Robin Hood films, clerical figures are balanced against one another, often a corrupt bishop and a godly Friar Tuck. The Tuck in this film is not a godly figure. He is a better man than most in the film, but like the Bishop, he doesn’t seem to really believe in the Gospel. It’s just a convenient facade used to achieve their purposes. In some previous films, the clergy is on occasion hypocritical, but hypocrisy implies there is truth that the clergy member is being unfaithful to. This film doesn’t seem to believe there is any truth in the Gospel. The church is evil, and Tuck is better off when he abandons it. Therefore, we give the church in 2018’s Robin Hood our lowest rating of One Steeple.

(We rate churches and clergy in this film, not films. But as a public service, I’d like to let you know that if we did rate films, we’d be giving this Robin Hood film the lowest rating we had.)

Posted by churchandstates at 9:50 PM