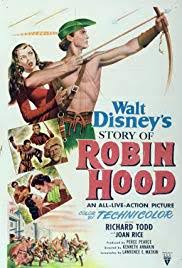 If you mention Disney’s Robin Hood to most film fans, they’ll think of Robin played by a fox and Richard the Lionheart played by a… well… lion. We’ll get to that version, but it wasn’t Disney’s only telling of the story.

Disney Studios began, of course, as animators. Founded in 1923, they made animated shorts until their first feature film, Snow White and the Seven Dwarfs in 1937. But animated features were very expensive and took a long time to complete, and sometimes films like Fantasia were initially flops and took years to recoup their costs. Walt decided to add live action to the program to balance the risks.

In the 1940’s they began experiments that mixed animation with live action, such as The Three Caballeros, Song of the South, and So Dear to My Heart. And in 1950 they made their first full live action film, Treasure Island with Robert Newton as Long John Silver. I think it’s the best film version of that story ever made.

Disney’s second live action film was 1952’s Robin Hood and His Merrie Men, and it’s definitely not the best telling of the Robin Hood story. There are reasons why the Disney version with a rooster minstrel singer is much more fondly remembered than this version. Here at Movie Churches, though, we’re interested in how the clergy is portrayed in films, and there’s something the two Disney versions share, which is different than most tellings of the story: all the men of the cloth are pretty good guys.

Even 1938’s The Adventures of Robin Hood, made under the freshly minted Hays production code when the legitimacy of the church was not to be questioned, had a corrupt Bishop who sought to betray the King. But in Disney’s live action version, the Archbishop of Canterbury is loyal to King Richard. When the King goes off with his men (including Maid Marian’s father), he goes with a blessing from the Bishop.

When Richard is captured and held for ransom, the Bishop zealously raises funds for his rescue, even encouraging other churchmen as they “melt down their offering plates” to contribute to the fund. Perhaps it would be better if the Bishop had more concern for the poor and starving people of Nottingham than the nobility, but at least he isn’t just looking out for himself. 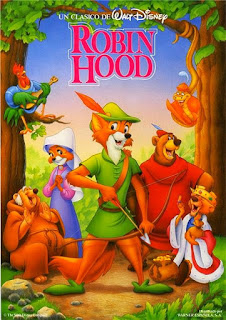 He even comes off a little better than Friar Tuck, who is still a good guy.

About the good friar: when Robin Hood decides he and his band need “a man in holy orders to care for our souls and look to our wounds,” Little John suggests a holy hermit, Friar Tuck. (But John whispers to the other Merrie Men that Tuck “would rather break heads than mend them.”)

Robin sneaks up on the Friar, who is alone and acting out a song using his ale and meat pie as the characters. Which is rather odd, but Robin seems amused as he watches from afar. But the two are soon battling each other.

The friar is with Merrie Men when they capture the Sheriff of Nottingham, and Robin asks if he is joining the band. Friar Tuck responds, “God forgive me, but I think I already have.” He’s asked to rule on what the Sheriff owes the poor of Nottingham, and Friar Tuck demands an amount the Sheriff claims is more than he possesses. As Robin had hoped, the friar cares for the sick in Sherwood Forest, included an injured Robin Hood.

Disney made another version of Robin Hood in 1973, an animated, animal version with Robin Hood as a fox, and more importantly for this blog, Friar Tuck as a badger (voiced by Andy Devine).

He is the only clergy to be found in the film. There are no bad bishops stealing from the poor or good bishops trying to support King Richard. In this version, Friar Tuck is pastor of a church in Nottingham, and we see him caring for the poor (rabbits and mice, who are the certainly “the least of these.”) He even confronts the Sheriff of Nottingham when he tries to steal from the poor, “Now see here, you evil flint heart!”

The sheriff tells him, “Save your sermon, Father, it ain’t Sunday yet.”

Tuck also cheers Robin along in his battles against the evil Prince John. He sings and dances in opposition to the Prince, “A pox on the phony King of England.” In the final battle against Prince John and the sheriff, Tuck joins in as they rob from the King’s treasury, calling out, “Praise the Lord and pass the tax rebate!” (When I first saw this as a kid at the drive-in, my dad explained to me this was a play on “Praise the Lord and pass the ammunition!”)

So all of the clergy in this film is positively portrayed, and it’s probably all part of Disney’s strategy of appealing to families with non offensive material. There’s nothing critical or negative about the church or the clergy in either film (unlike every other telling of Robin Hood I’ve encountered). So the clergy in these two films, especially, of course, Friar Tuck, receive our highest Movie Church rating of Four Steeples.

Posted by churchandstates at 7:27 AM