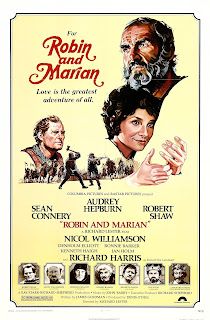 Robin and Marian (1976)
As we conclude Robin Hood Month at Movie Churches, I realized we probably should have called it Friar Tuck Month. After all, he’s the main clergy in these films, and he’s gotten the bulk of our attention. Tuck is in this film, too, but in Robin and Marian, the most important member of the clergy is in the title.


This version is directed by Richard Lester (A Hard Day’s Night and Superman II) and written by James Goldman (The Lion in Winter), the brother of the recently departed William Goldman. (The Goldman brothers went to high school with my father-in-law in Highland Park, Illinois, though I suppose this is interesting only to a small portion of our readership. It’s a very important portion.)

It also features stars that outshine most other actors in these roles, with Sean Connery as Robin and Audrey Hepburn as Marian. (They’re rivaled only by the stars in the best version of Robin Hood: Errol Flynn and Olivia de Havilland. Sorry Kevin and Mary Elizabeth. Sorry Russell and Cate. Not sorry Taron and Eve.) Previous versions told stories of the origins of Robin Hood. This is the only version I know of that tells the end of the Robin Hood story.

As the film begins, Robin is an old man returning from the Crusades (Connery was 46 at the time). On the journey home, King Richard (Richard Harris) is killed during an attack on a castle, so Robin and Little John (Nicol Williamson) leave the army and return to Sherwood Forest where they are welcomed by Friar Tuck (Ronnie Barker) and Will Scarlet (Denholm Elliott). To make a living, Friar Tuck has been taking confessions from the faithful while Will steals their horses. Robin is amused to learn that in his absence he’s become a legend. Robin asks what has become of his young love, Maid Marian, and is shocked to learn she is the abbess of the Kirkley Abbey. Marian has been a nun for eighteen years, caring for the poor and sick. 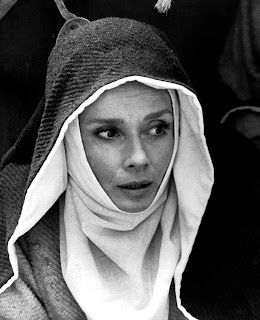 King John (Ian Holm), now the monarch, is in conflict with the Roman Catholic Church and has ordered the expulsion of all the senior clergy from the land. Under these orders, the Sheriff of Nottingham (Robert Shaw) is sent to arrest Marian. Robin learns of these orders and goes to rescue his former love, but Marian wants none of it.

When he arrives, she asks, “What the hell are you doing here?” He says he’s come to rescue her, but she replies, “It’s Mother Jennett now, and you can march back to Israel.” When Robin insists she needs his help, she responds, “God will be with us.”

Robin says, “He was with us in the Crusades, and He didn’t do much good there.”

Robin doesn’t follow Marian’s instructions but instead battles the sheriff when he comes to arrest Marian. When Marian insists she wants to surrender herself peaceably, Robin knocks her unconscious. Violence ensues between Robin and the sheriff, of course -- the very reason Marian didn’t want Robin to get involved.

Robin retreats to the forest, with his men and the nuns. And Marian. Marian and Robin’s romance resumes; they take long walks in the woods and make love in the fields, but Marian wants Robin to cease his battle with the sheriff. She threatens to leave Robin.

Robin is brought to Marian at the abbey, where she gives him medicine which relieves his pain. After a moment, Robin realizes she’d actually given him poison knowing he wouldn’t recover from his wounds. And she takes the poison herself.

Marian as a nun had been doing pretty well in the Movie Church Steeple rankings up until that moment. Sure, she had slept with Robin, but she helped the sick and tried to prevent violence. But this little speech is in direct contradiction to the words of Jesus (from the Message paraphrase), “Anyone who comes to me but refuses to let go of father, mother, spouse, children, brothers, sisters, yes, even one’s self, can’t be my disciple.” Some may find Marian’s words romantic, but it brings her Steeple rating down to two of the possible four.
Posted by churchandstates at 7:28 AM