Crime Month Gets an Offer it Can't Refuse

Francis Ford Coppola’s 1972 film, The Godfather, is one of the most acclaimed movies of all time. It won the Oscar for Best Picture, it was the biggest moneymaker of its time, and it still shows up near or at the top of critics' lists of best films. And yet, I’m going to write less about it than I do about a Christian Slater direct-to-video stinker.

Why? Because we write about clergy and churches in movies, and a cheesy film like God’s Not Dead spends more screen time on those things than this particular classic -- which won an Oscar for the director, Coppola, screenwriter Mario Puzo, and Best Actor Marlon Brando (who refused the award and sent Native American activist Sacheen Littlefeather to accept in his place).

But the church doesn’t come up a lot in the film. We see the Godfather’s son, Michael (Al Pacino), coming out of a movie theater with his girlfriend, Kay (Diane Keaton). They’ve been watching The Bells of St. Mary (a contemporary film for the characters, as the scene takes place in 1946). Kay asks Michael, “Would you like me better if I was a nun?” (A rather bizarre question to ask on a date.)
He says, “No.”
But then she asks, “Would you like me better if I was Ingrid Bergman?”
To that, he says, “Now that’s a thought…” But then Michael spots a headline at a newsstand. His father, mob boss Vito Corleone, has been shot. So no more nun talk.

It’s interesting that Kay wonders if Michael wishes she were more “moral,” while the film is chiefly about Michael's descent into immorality. The son of a mafia Don (Brando), he tells Kay the criminality is “my family, it’s not me,” but throughout the film, he is increasingly pulled into the family business. 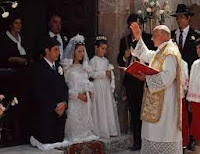 The first time we see a priest is at the second wedding in the film. Don Corleone wanted Michael to be able to stay out of crime, become a lawyer or a politician, but when an attempt is made on the Don’s life, Michael seeks revenge. He commits two murders and flees to Sicily. In the small town where he's hiding, he meets a beautiful woman, is "thunderstruck," and marries her. We briefly see the priest bless the couple at the wedding, and that’s all we see of him.

Don Corleone recovers somewhat from his injuries and goes back to leading his “family.” Other crime families want to get into the business of selling narcotics, but Don Corleone resists -- though not for reasons of morality. He says, “It’s not like gambling, liquor, or even women which is something most people want nowadays, but is forbidden by the pezzonovante of the Church.” His connections in government and the police department won’t help him if he gets into the drug business. (The word “pezzonovante,” Italian for “big shots,” didn’t appear in the subtitles on the DVD I was watching, but it is interesting that the Don seems to view the bureaucrats in the church just like bureaucrats in any other worldly organization.) 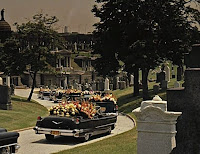 When Don Corleone dies later in the film, the funeral is a traditional Catholic ceremony, and all the attendees (mostly criminals and, apparently, good Catholics) cross themselves.

The film has all of the traditional church rituals: two weddings, a funeral, and even a baptism. The baptism is the most interesting service for us here at Movie Churches.

Michael agrees to be the godfather for his sister Connie's (Talia Shire) son. In one of the most powerful sequences in the film, Michael arranges for his chief rivals and enemies to be executed at the same time as the baptism.

Michael, as his nephew's godfather, answers the traditional baptismal questions.

“Michael, do you believe in God, the Father, Creator of Heaven and Earth?”
“I do,” the killer answers.

“Do you believe in Jesus Christ, His only Son, our Lord?”
“I do,” Michael responds.

“Do you believe in the Holy Ghost, the Holy Catholic Church?”
“I do,” Michael says. Is he lying or telling the truth? Great question.

And finally, the priest asks, “Michael Rizzi, will you be baptized?”

And Michael Corleone answers for his nephew, “I will.” The priest sprinkles the baby, baptizing in the name of the Father, Son, and Holy Spirit” (in Latin, of course). The ceremony ends with the priest's blessing, “Michael Rizzi, go in peace, and may the Lord be with you. Amen.”

The Church doesn’t come off well in this film. The members of the Mafia (a word never used in the film because of pressure from Italian heritage groups) seem to be accepted members of their Catholic churches. I know church discipline isn’t widely loved these days, but still… An active career of murder would be a reason to deny someone the sacraments, wouldn’t you think?

That’s why, though The Godfather is rightly regarded as one of the greatest films of all time, the church in the film earns a meager Two Steeples.

Posted by churchandstates at 6:34 PM