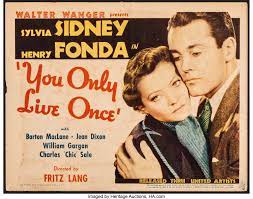 “Father Dolan is for everybody!”
It’s hard to find a more ringing clergy endorsement than the words of Eddie Taylor (Henry Fonda) in praise of the prison priest in 1937’s You Only Live Once. The film is the second American film made by the great Austrian/German director Fritz Lang, who had already made great films in Germany like Metropolis and M.
Though baptized a Catholic as a baby, Lang had Jewish heritage and he worried about the rise of the Nazis. This fear intensified when the regime began to censor his films, so he left Germany for the United States in 1933. It is interesting that Lang’s first two American films are quite critical of the American justice system, almost as if he was testing whether he would be able to practice the freedom of expression that was becoming impossible in his homeland. After making Fury, he made this film, the story of an ex-con who falls in love and marries his public defender’s secretary (echoed in the Coen brothers’ Raising Arizona where an ex-con marries a prison guard.)
But that ex-con, Eddie Taylor (Henry Fonda), can’t keep a job. The man that hires him out of prison uses the first possible excuse to fire the “jailbird;” Eddie is frustrated that he must rely on the income of his wife, Joan (Sylvia Sidney). He is tempted to return to a life of crime, and his former gang offers him a job. He resists the temptation, but when his former gang's heist goes wrong and six men are murdered, the gang frames Eddie for the killings.

Eddie is convicted of the murders and sentenced to death by electrocution, bringing him back to Father Dolan (William Gargan), the chaplain at the prison. At the start of the film, Father Dolan urged the parole board to give Eddie a chance and helped him gain his freedom. 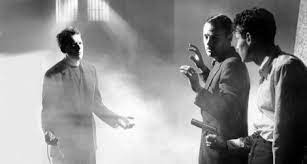 Now that Eddie's back in prison, Father Dolan encourages him not to give up. He urges him to hope in his wife and hope in God, but Eddie becomes increasingly bitter. Father Dolan assures Eddie that he will be going to Heaven (with a Universalist theology which is quite different from my theology and is rejected by Eddie -- for very different reasons from mine).

The night before his execution, Eddie receives a gun that's been smuggled in, and Eddie takes hostages. As he tries to escape, investigators on the outside discover evidence that clears Eddie of the murders. Eddie is granted a pardon, and the warden tells Father Dolan. The priest tries to convince Eddie that he's been granted his freedom, but Eddie thinks it’s all a trick to make give up his gun.

With Father Dolan as his hostage, Eddie makes his way to the prison gate. When gunfire breaks out, Eddie inadvertently shoots the priest. If Father Dolan should cry out that he's been shot, the guards will come down on Eddie. Instead, the priest decides to remain quiet and give Eddie a chance to escape and live his life. Father Dolan acts out the words of Jesus in John 15:13, “Greater love has no one than this; to lay down one’s life for a friend.”

Early in the film, when Eddie’s criminal friends argue that Father Dolan was just another cog in the prison system, Eddie said that the priest was concerned about everyone, including the cons: “Father is for everybody!” And that is why the priest earns our highest Movie Churches rating of Four Steeples.
Posted by churchandstates at 6:55 PM